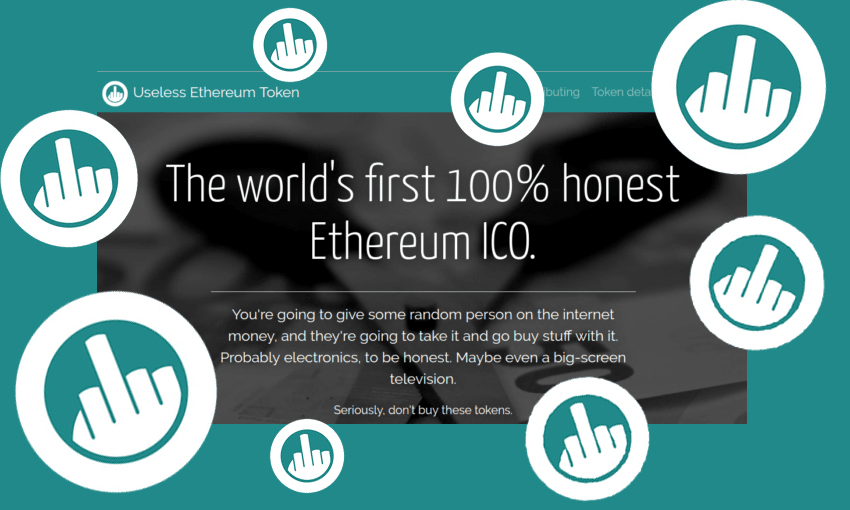 “You’re going to give some random person on the internet money, and they’re going to take it and go buy stuff with it. Probably electronics, to be honest. Maybe even a big-screen television. Seriously, don’t buy these tokens.”

How do you spot a cryptocurrency scam?

“You’re going to give some random person on the internet money, and they’re going to take it and go buy stuff with it. Probably electronics, to be honest. Maybe even a big-screen television. Seriously, don’t buy these tokens.”

Wherever there’s money to be made, the scammers and Ponzi schemes are never far behind. Mark Hattersley gives his three tips on staying vigilant while investing in cryptocurrency.

Useless Ethereum Token (UET) launched in mid-2017 with the description “the world’s first 100% honest Ethereum ICO. No value, no security and no product. Just me spending your money … Seriously, don’t buy these tokens”.

And yet shortly after launching, UET had made its creator more than US$350,000, or almost NZ$500,000. The anonymous founder then issued a message on the coin’s website thanking everyone who invested “regardless of the fact that none of you read any of the warnings on this page”.

Along with Luis Fonsi’s ‘Despacito’, cryptocurrency was the sleeper hit of 2017, and it made people hold on to their money a little too loosely in the hope of emulating early investors who put money into bitcoin many moons ago.

And wherever there are people with a loose grip on their cash, others will emerge to try and take it from them, whether that’s through humorous yet transparent coin launches like UET, or flat-out fraud.

The most recent high-profile example of the latter has been the BitConnect scandal, which lost individuals around the world tens and even hundreds of thousands of dollars.

BitConnect isn’t the only scam out there, either. As cryptocurrency continues to mature — spurred on by the popularity of Bitcoin, Ethereum, Ripple and other popular coins — and regulation struggles to keep up, we’re likely to see more and more scam coins entering the market.

So, how do you avoid cryptocurrency fraud without missing out on genuinely interesting coins with real potential? Here are three basics ways to spot a scam.

1) Do they make bold claims about your returns?

BitConnect was a Ponzi scheme launched a little over a year ago that promised high returns to investors. It also gained meme-status after a high-octane keynote speech by advocate Carlos Matos.

BitConnect users were told the bitcoin they invest would be used by the platform’s ‘trading bot’ to take advantage of bitcoin’s volatility, handing you around 1% in interest each day. It’s like a loan, but with the value stored and any returns paid out in BitConnect’s own coin, BCC.

The company essentially suggested investors could make US$4,000 in a year by investing US$100, or US$4 million from a mere US$100,000. But don’t assume people didn’t hand over that much money to Carlos and his BitConnect friends: six investors are reportedly suing the platform after losing US$770,000.  They lost all that money after Texas and North Carolina issued cease and desist letters to the company and BCC quickly fell from being worth around NZ$580 at the start of January to $8 by the end of it, with the platform now no longer trading. Regardless of this massive failure, BitConnect X is expected to launch this year outside of the States and away from US regulators.

The lesson is simple, and often quoted: If it looks like a duck, swims like a duck, and quacks like a duck, then it probably is a duck. So if it acts like a Ponzi scheme, it almost certainly will be. And if it has the name ‘BitConnect’, avoid at all costs.

2) Is the coin vaguely described or deliberately misleading?

Cryptocurrency can be a way for mum-and-dad investors to go over the heads of wealthy FX trading companies and play the currency-trading game themselves. But it can also be highly technical, which means scammers rely on confusion and jargon to encourage people to blindly invest.

If you don’t know what a crypto does from its introductory lines on its website, check the site for a whitepaper. This should be a clear breakdown of what the coin does and why it exists. If there’s no white paper, consider this a huge red flag.

Savvy investors will also want to know about the founders and the team behind the coin. Do they bring the experience and legitimacy needed to make a new coin a success? People like Ethereum founder Vitalik Buterin are real names in the crypto world.

Shady coins will have little to no information available about their founders or team members, likely protecting themselves from lawsuits and meaning they can pull the plug and disappear whenever they want. Meanwhile, other scams will claim to have big names associated with them, like Prodeum did. But the coin was found out to be shady when its “founder” Petar Jandric told his LinkedIn followers he had nothing to do with it.

Particularly if you’re planning on putting a substantial amount of money in a coin, it’s really worth doing your homework, including stalking the social media of any founders you’re unsure of.

3) Is most of the coin held by its creator?

It’s not necessarily a scam when creators of a coin hold most of the supply, but a lot of scams (or potential scams) have this in common. Pre-mining is when a developer sets aside a large number of coins for themselves before releasing the source code.

It might be to later pay for expenses further down the line (potentially legit) or it could be dubious. High volumes of owned coins lend themselves to the ‘pump and dump’ form of fraud — typically when security prices are inflated through false reports and then sold off.

Bytecoin has come under scrutiny for secretly mining prior to its release, with more than 80% of the total supply held by its creator. Crypto price tracking website Onchain FX even give a warning notice next to the coin, saying it is “almost certainly an elaborate scam”.

Given that many coin platforms control their circulation, legitimate coins go out of their way to show they’re not purposely monopolising the currency for their own gain. Ripple, for instance, control their coin’s release with an escrow account.

Again, it can be complex. Luckily, there’s so much information out there about each coin, it’s possible to research in depth what you’re getting into before you spend your money.

And probably just avoid any coin whose name someone screams at you repeatedly from a stage.