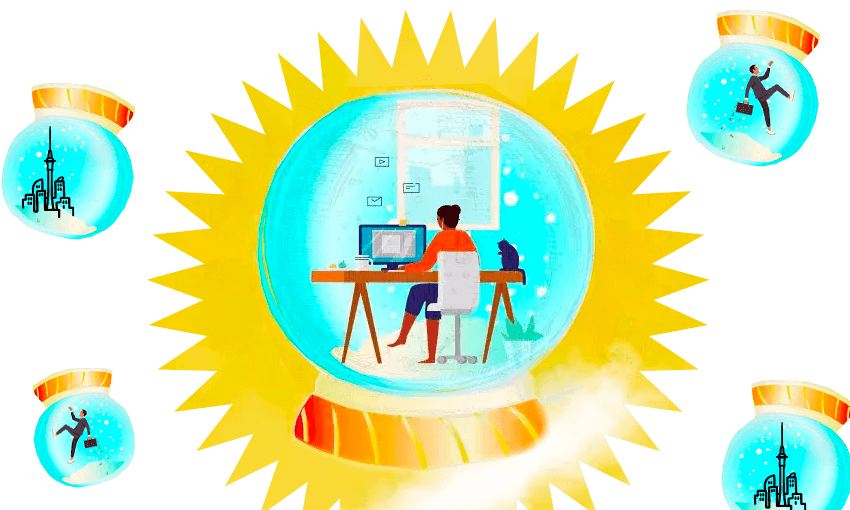 Is work from home the future? Yes, says one CEO – and bosses just have to deal with it

Two years into the pandemic, governments are easing restrictions and company executives are urging their people back into the office. But one chief executive believes a ‘remote work revolution’ is the future.

All over the world, businesses are grappling with what the future of work looks like. Governments are beginning to ease pandemic restrictions, spurring economies and reviving CBDs after two years of commercial inactivity caused by lockdowns, physical distancing and capacity limits. Business leaders and managers, having valiantly tried to stay connected with staff via video conferencing, instant messaging platforms and emails, are eager to return to the “before” times – or a hybrid of remote and office work, at least. Yet entire populations, having been forced to work from home for much of the last two years, would rather quit than lose the ability to do their jobs and fold laundry, fix children their lunch or pop out to run errands.

Optimistic that the pandemic will subside in 2022, and recognising or conceding that work from home is here to stay, corporates are embracing flexibility to varying degrees. At the start of March, Apple CEO Tim Cook told employees they must return to the office at least once a week starting April 11, before increasing that to two days in early May and a minimum of three by month’s end. It follows similar edicts issued by other Silicon Valley giants such as Google, Microsoft and Twitter.

Across the Tasman, the chief executive of National Australia Bank (NAB), New Zealander Ross McEwan, has been encouraging people to return to the office for a few days a week, and consumers to resume spending in inner cities, as Australian state governments relax mask-wearing requirements. In Aotearoa, big listed companies like commercial landlord Precinct Properties and finance minister Grant Robertson have made similar pleas, even as the country is confronting a wave of omicron cases and workers are being encouraged or directed to work from home to slow the spread.

Not all bosses are such fans of the office, however. Ben Thompson, the chief executive of Employment Hero, an Australian-based employment management platform, disagrees with McEwan. In Thompson’s mind, NAB’s position is the product of outdated thinking, and doubles down on traditional employment power structures.

Working from home made people realise that geography was no longer a constraint to finding work and retaining talent, he explains. Since the Industrial Revolution, people have had to move to large cities to find employment. But parents (and historically women), people living with disabilities, carers, those who prefer the lifestyle of rural and remote towns and, more recently, the nearly three billion people who don’t have an internet connection, have been excluded from that search.

Businesses possessing a more expansive view of their talent pool will have a better chance of succeeding in the current tight labour market, says Thompson. Small and medium-sized businesses, which form the backbone of many countries’ economies, may lack the clout or war chests of their much bigger counterparts but offering remote working could help even the playing field and secure talent they might otherwise not attract. Moreover, mandating a return to the office may be the path of least resistance compared with upskilling managers, but “it’s taking you down a short path where you’re not competitive”, Thompson says. He thinks executives’ egos are partly driving that direction of travel – they may have worked hard for a long time to earn a car park and a corner office with a view, and those markers of success are better conveyed if others are in the office to notice them. “When you’re working online, everybody’s got one camera, one screen. There’s no power dynamic when everybody is exactly the same online.”

Thompson says even a hybrid work policy is still a hassle as it has some “severe” limitations. People must still be within a commutable distance of their office and a blended arrangement, by its very nature, means workforces are split – some people are in the office while some are at home. But going fully online, even for those in the office, is a simple, fairer and more inclusive solution, he says.

NAB’s McEwan, in supporting a return to the office, has argued that people thrive on in-person interactions, whether that’s catching up with workmates near the mythical water cooler or generating ideas on whiteboards in meeting rooms. He believes that new staff, graduates and interns benefit from regular in-person contact with colleagues and superiors, and during the pandemic, the shortage of spontaneous learning opportunities they would otherwise have gotten by shadowing managers may have stunted their careers. McEwan also says companies benefit from innovation generated in-person and the cohesion that’s fostered when people are present in the same place.

“If the success of your business is pinned to a serendipitous discussion at the water cooler, then I think you need to be more focused on your strategy,” says Thompson in response. “I’m not sure serendipitous discussions at the water cooler are what have made any company great.” What will make companies of the future great is giving staff time to strategise, trusting that people at home will remain productive without the oversight of managers, providing digital alternatives to stimulate conversations and innovation, and maintaining frequent one-on-one mentoring, he says.

Remote clearly doesn’t suit industries such as manufacturing, construction and others based on physical labour in the same way it suits knowledge workers, whose jobs are to think for a living. The Bank of New Zealand, owned by NAB, cut its corporate office space by 30% in 2021 following a permanent shift to a hybrid working model, allowing nearly 5,000 employees to work either two or three days from home. A spokesperson said that with Aotearoa at the red traffic light setting, BNZ staff have been asked to work from home, although the vast majority enjoy flexible working. “BNZ is not prescriptive in how flexibility is applied. Our people work out what works for them and their teams to function efficiently and deliver for our customers.”

Employment Hero’s Thompson says the company, essentially a software development business, doesn’t need its people in the office “at all, ever”. So what does the future of work look like then? “I call it the remote work revolution,” he says, “and we’re just at the start of it.”