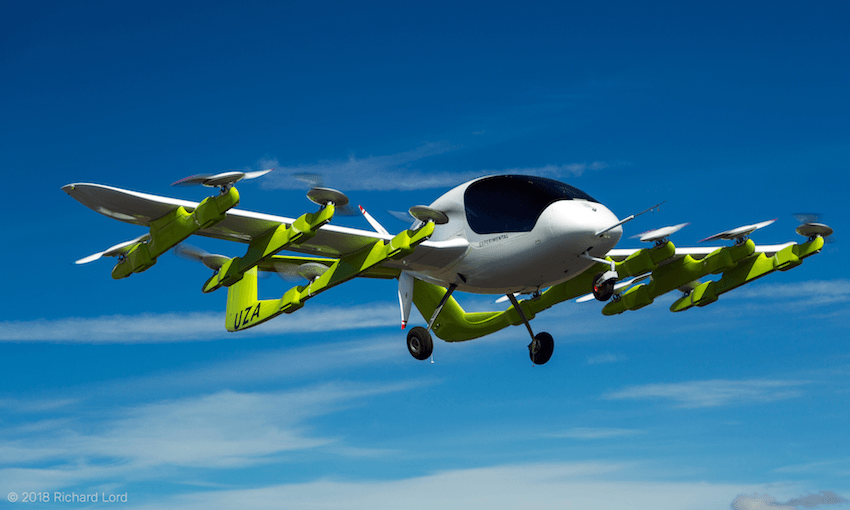 Welcome to the Cheat Sheet, a clickable, shareable, bite-sized FAQ on the news of the moment. Today, the ‘everyday air taxi’ that’s taking off in Canterbury.

Yes, yes it is. In the hills around Canterbury, a small, self-piloted electric flying contraption – a.k.a, a “plane” – called Cora is being tested and trialled by a company backed by Google co-founder Larry Page. Because it’s electric there are no emissions, Cora’s developer Kitty Hawk Corporation says, and because it’s self-piloted through software (although someone on the ground keeps an eye on it) you don’t need a pilot’s licence. So it could bring flying to the masses, and lead to masses of new air traffic rather than car traffic.

No, that’s not it. Another feature of the flying car/plane is that it doesn’t need a runway (yes, similar to a Harrier “Jump” Jet) and takes off vertically, like a helicopter. This has obvious advantages in terms of not needing airports – the flying car/plane could take off and land almost anywhere and could transform “rooftops and parking lots into places to take off right from your neighbourhood”.  The current model has a range of about 100 kilometres and can travel at about 150kmh.

So how does good old New Zealand fit into this?

Well, there’s a company here called Zephyr Works that’s helping to launch the project. The first aircraft, sorry – flying car – arrived here in October. Here’s CEO Fred Reid: “It’s one thing to design and rigorously test an aircraft, but it’s another thing to make it useful to society. That is the reason that we are so excited and proud to be working with the people and government of New Zealand to roll out a commercial air taxi service.”

Sucking up further, the company says “with its commitment to innovation and forward thinking regulatory ecosystem, New Zealand is the perfect collaborator”. But the real oil is probably “the ability to gain native certification (certification from design right through to commercialisation)”. We’re one of a few countries that do this, and we also have fulsome intellectual property laws, so no-one can come along and copy Cora. Plus, we Kiwis are suckers for big sky thinking, number 8 wire, smell of an oily rag, punching above our weight etc.

Crikey. That sounds proper as.

Yes, these people are legit. Kitty Hawk Corporation are SO committed to up and not down, even their website scrolls to the sky. They believe they will be able to get an “everyday air taxi” service going in about six years. Kitty Hawk’s CEO, robotics pioneer Sebastian Thrun, helped to develop the self-driving car and the too-yuppie-for-words Google Glass.

But really, just listen to Cora. It’s dreamy. “An air taxi so personal and so simple it could take the trips you make everyday, the ones that define our lives, and bring them to the sky. After eight years of tackling some of the biggest challenges in aviation, that dream is one step closer. Cora isn’t just about flying. Cora is about the time you could save soaring over traffic. The people you could visit. The moments that move you.”

OOOOOKKKK. Why are they doing this?

Well, everyone hates transport disrupter Uber. (Jokes, not me, but everyone else). Look, the issue is that more cars on our roads (even if they are ride-shares, or electric) is a never ending traffic-causing life-sucking experience. This way we could all cause traffic jams in the sky instead with “flying cars”, and leave the roads for the utes and vans and real working vehicles. And Google folks seem to like sticking stuff in the sky, so why the hell not? And it certainly has potential to be more useful than this.