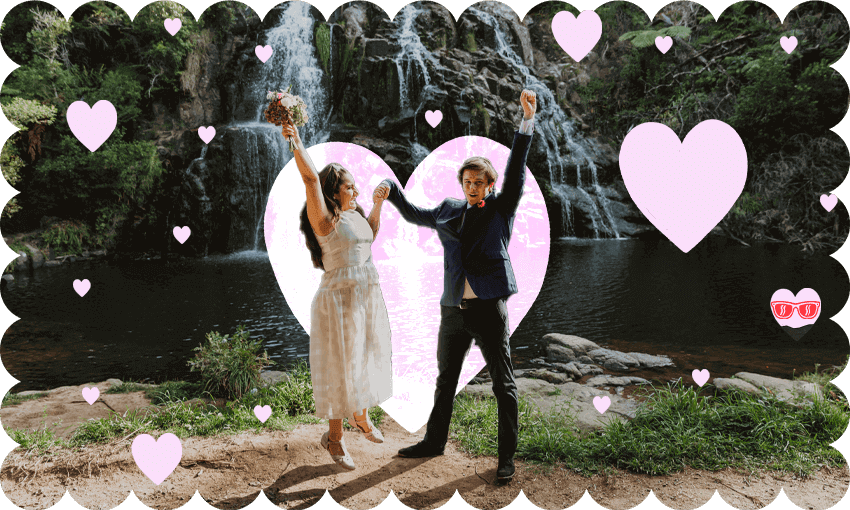 Massive celebrations are out; small, intimate ceremonies for two are in. Chris Schulz finds out what’s behind the rise of ‘elopement’ wedding packages.

When Melanie and David got engaged at the end of 2019, they had a big wedding planned. Family from all over the world —Australia, Germany, and South America — would fly to New Zealand, the celebrations would last a week, and their love for each other would be on show the entire time.

“It was supposed to be 100 people,” says Melanie, who paid a deposit to book a venue large enough to accommodate everyone, then planned out a week of activities, including several barbecues. “The only thing we could imagine was having all our family there.”

Then the pandemic hit, forcing their wedding plans to be put on hold. As 2020 ticked over into 2021 and a blur of lockdowns and alert levels, the pair got sick of waiting. “We were up in the air as to what we were going to do,” says Melanie. “It was so indecisive. The emotional fatigue [was draining].”

She’d heard of people eloping before the pandemic, but Melanie had never even considered it for her and David’s wedding. But, more than two years into their engagement, she jumped on Google, searched for “elopement packages,” and found a small venue nestled into a forest clearing near Waihi that might suit.

The Owharoa waterfall with a small swimming hole was nearby. They could get married in a clearing with views over the bush, with just a celebrant and two witnesses present. Then they’d walk to a rustic forest cabin where a ladder leads up to the bed. Food that had been grown and cooked on site would be delivered in hampers to their door.

Emma Walters hears this a lot. She and her husband have owned The Falls retreat for 15 years, and while multiple lockdowns have curbed the numbers of diners that come through their doors lately, elopement packages for two have taken off.

She’s doing two a week, sometimes more, with bookings months in advance. When The Spinoff calls, there’s one happening the very next day. “We provide them with a bottle of Prosecco, and a delicious hamper … homemade soda bread, homemade chutneys and pickles, marinated chicken breasts, and organic salad out of our vege gardens,” Walters says.

Yes, there’s a dessert platter too, and poached eggs breakfast, as well as a small wedding cake, if required.

The trend is happening around the country, with helicopter wedding trips to Parihoa being offered in Auckland, lakeside elopements available in Wānaka, and a “wild” elopement package up for grabs in Glenorchy. Celebrants and wedding photographers also offer elopement services, with one telling the Spinoff they preferred snapping an elopement over a big wedding because of the relative lack of stress.

Despite the lack of family and friends there, Melanie and David were surprised by how emotional their March elopement was. “He was quite nervous and a little bit stressed [so] I was calming him down,” says Melanie. “The moment we started walking into the ceremony, I started crying my eyes out. I couldn’t stop.”

It’s an emotional moment for Walters too. She often sits in on the ceremonies as a witness, and says they’re often more tearjerking than larger weddings. “You really feel it,” she says, believing the lack of guests boils a wedding down to its bare essentials. “They just want to make this commitment to each other, they want to declare their love for each other.”

Even better, says Melanie, is that she remembers every single second of her wedding day. “Couples say, ‘The day’s a blur’. For me, it wasn’t,” she says. “I remember everything, from waking up, snuggling David, then going through the whole process, having breakfast, driving over there.”

Melanie even remembers the storm they drove through on their trip down from Auckland. But when their big moment came, the skies cleared, the sun came out, and their vows, exchanged in front of two strangers, were picture perfect. “It was the best decision we’ve made.”