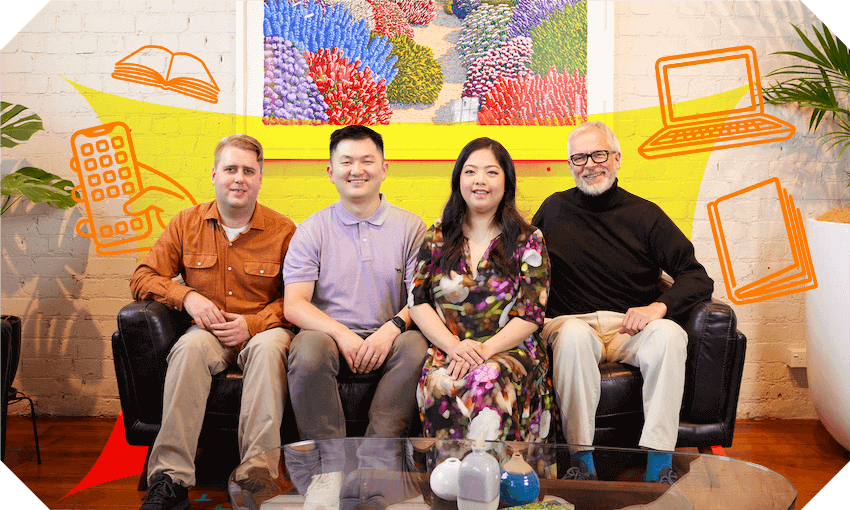 Education technology platform Kami has experienced phenomenal pandemic-fuelled growth. Reweti Kohere learns its success dates back to a critical decision, and some advice from its ‘designated adult’.

For nearly 40 minutes, I watch Hengjie Wang over Zoom all but get swabbed for Covid-19. The chief executive of New Zealand-based education technology platform Kami is at his home when our video call connects, and he apologises in advance for any disruption his ensuing rapid antigen test might throw up – he’s got a flight to catch the next day. I too apologise for the surging, noisy spectacle outside my apartment as window cleaners water blast the exterior. “Any more challenges for this call?” asks Bob Drummond, Kami’s chief revenue officer, warning that his internet connection may drop out any minute.

Life stops for no one, and Kami’s founders aren’t slowing down. “We’re hiring people to catch up to where the business is at,” says Drummond, an indication of the nearly decade-old Auckland-based company’s success over the last three years. Kami’s web-based platform lets teachers and students share learning resources, foster better engagement and interaction, conduct virtual classes and collaborate, edit, annotate and attach audio and video notes on digital whiteboards. During the first wave of Covid-19 in 2020, tens of millions of customers, many of whom were teaching and learning from their locked-down homes, could use Kami’s products free of charge after the company removed subscription costs, a decision Drummond says ensured users had a platform to keep learning amid the disruption. While Kami remains free for New Zealand schools, and a basic user plan and trial are complimentary, annual subscriptions start at $99.

It’s a clever decision, offering a solution during a crisis – and good for business if it pays off. And the consequent uptake was huge. While Kami declined to give figures on how many have taken out paid subscriptions, the company served about seven million customers worldwide in 2019. Within a year of Covid hitting, it reached 20 million users, and now serves 34 million people – an increase of nearly 400%. Revenue has increased 1,200% since 2019, and in that time staff numbers have risen fivefold to 100. The metrics influenced Deloitte in 2021 to award Kami the top spot on its “Fast 50” list of the fastest-growing businesses. Time magazine followed suit this March, listing the business as one of its 100 most influential companies.

Wang and co-founders Jordan Thoms (chief technology officer) and Alliv Samson (chief operating officer) were students at Auckland University when they sought a solution in 2012 to their note-taking woes. In their final year, the trio created a note-taking web app, which they entered into the university’s “$100K Challenge”, a competition to unearth promising business ideas. Drummond, one of the judges, admits he initially wasn’t that enamoured by the trio’s business plan or idea. But he had a gut feeling he was talking to three “exceptional” people. While the finalists didn’t win, they met up with Drummond in a café after the competition. He recalls saying to them: “How about we turn this into a business?” Two years later emerged Kami, which means paper in Japanese.

Drummond studied at Auckland University too, back in 1979. The software engineer shifted over to the “dark side” of sales and marketing and his tech career has seen him move into governance and investment roles. Kami is the sixth startup he’s been involved in, with results ranging from “crashed in flames” to a Nasdaq IPO. Kami is somewhere in the middle, he says. Initially, he was the trio’s cheerleader, providing reinforcement and encouragement, sourcing investment and bringing them up to speed on business fundamentals. Advice-giver wasn’t his function, and giving advice is overrated anyway, he says. When Kami started showing promise, it was clear the trio needed an experienced head who was willing to get stuck in, “not sit on the outside and tell them how to do it”. That’s when Drummond formally joined, leading and building Kami’s sales team.

He’s been described as Kami’s “designated adult”, a term Drummond says reflects the “special sauce” he brings to the company. But he’s quick to warn experienced entrepreneurs might sometimes be talking to their past selves when giving advice. “There’s a risk the world they’re talking about, which they’re basing their advice on, no longer exists,” he says, adding he’s been guilty of it too. As he started building an industry-standard cloud business sales team for Kami, he quickly realised the revenue structure wasn’t sustainable in the long term so he dumped it and started over. If he’d been on the outside advising, he wouldn’t have recognised the industry dynamics had changed and that it needed a new revenue model, he reflects.

Wang reminds me of the stat that nine out of 10 startups fail, so the odds were immediately stacked against Kami. Like so many entrepreneurs, their first few years were “lean” and few investors were willing to take a chance on them, he says. Drummond adds that venture capitalists kept advising that education was a “graveyard” for startups – many had tried to transform the classroom only to peter out. Yet digital devices such as Google’s Chromebook and Apple’s iPad were hitting the market in the 2010s and teachers in North America would send unsolicited feedback on how much they enjoyed Kami.

Figuring out who to sell to was a critical decision for the co-founders. At one point, lawyers, real estate agents, media companies, architects – essentially everyone but teachers – were using Kami, so much so that 99% of its revenue came from non-education customers, all wanting to take the company in different directions, Wang says. It was a high-stakes decision – and Drummond had seen it before. “My input at that point… was ‘focus or die, we cannot make everybody happy. We will all just get spread thin. We have to choose a market’,” he says. “You agonise for ages – did we just turn down our biggest opportunity without realising it? But all the success we have today comes from that one decision that we forced ourselves to make.”

Even if it means declining other “lottery tickets”, startups like Kami need to embrace the risk of focusing on one thing, he says. After all, a ship in harbour is safe, but that is not what ships are built for. “An opportunity is more like a ticket to do work,” Drummond says. “It’s an open door but there’s a lot of work on the other side and if you go through there, you’re not going to be over here doing this job and you’re going to do a half-assed job on a bunch of things.”

Wang is emphatic that Kami wouldn’t be where it is without Drummond’s “tremendous” impact. But it’s not done growing – nearly 1.5 billion students were affected by a 21st-century pandemic that accelerated the uptake of digital learning solutions and pushed education systems toward learning from home. The chief executive says Kami is still barely scratching the surface of potential users. As the call ends, I notice Unichem’s blue and orange branding and remember Wang is in a pharmacy. “Sorry, I’ve gotta run and get something stuck up my nose. It was a pleasure to speak with you,” he says, returning to more pressing matters. Drummond leaves the chat too, his internet connection having held up.

Follow Business is Boring on Apple Podcasts, Spotify or your favourite podcast provider.