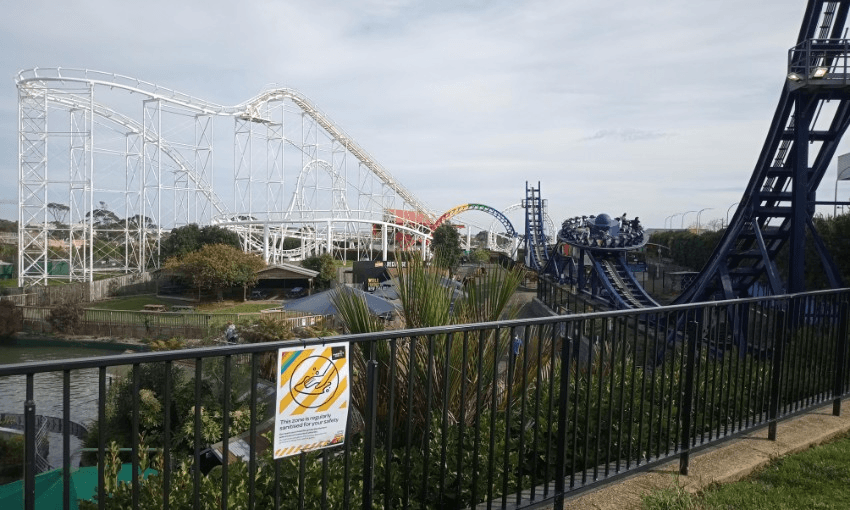 Michael Andrew heads to the south Auckland amusement park as it returns to business.

When I was maybe 10 or 11 years old, I used to dream about having Rainbow’s End to myself. What if the park was empty, and I could enjoy all the rides without having to compete with the crowds or the queues? Last Friday, 20 years on, that dream came true.

After nearly eight weeks shuttered, Rainbow’s End had reopened to the public on the second day of alert level two. But what had changed at New Zealand’s iconic amusement park?

After pre-booking – online bookings are now mandatory – I arrived in the early afternoon to find the entrance deserted. In a world of crowds and long wait times I took that as a win. But when I approached the ticket counter and the multicoloured Rainbow’s End welcoming sign I began to feel a twinge of guilt. After spending the last two months confined to my house, it felt decadent. But I reminded myself that I was there to do important work, so I sanitised my hands, showed the masked woman behind the glass my ticket on my phone, and ventured inside.

First you see the signs. Everywhere, on every fence and post, were the black and yellow Covid-19 warnings: “We can all slow the spread”, and “Don’t touch” and “This zone is regularly sanitised for your safety.” They were not lying. Every 20 metres a staff member wearing PPE was wiping down handrails, tables and every other conceivable surface. Even the signs about sanitising got sanitised. Cash is no longer allowed in the park, the water fountains are closed and no physical items like wristbands or maps are handed out.

Compared with what I remembered, the park was mostly empty. There can’t have been more than 100 visitors spread out through the 7.5-hectare space: a few young couples, mostly families. The parents sat at tables watching their kids on half-empty rides. But they all seemed happy and comfortable.

Apart from the virtual reality Playlab, Kids Kingdom, and a couple that were closed for maintenance, all the main rides were open. I wasted no time. My professional poise collapsed into youthful rapture as I launched into the Log Flume, the Corkscrew Coaster and Fearfall in quick succession, revelling in the nostalgia, the adrenaline and the total absence of crowds.

The staff manning the rides were meticulous and firm, and the safety protocol was consistent throughout. At a monstrous contraption called the Stratosphere for instance, guests would wait behind the barrier in their bubbles (maximum 10 people) while the ride controller sanitised the seats with hospital grade disinfectant mist.

The controller then stood at the gate admitting one bubble at a time, instructing passengers to sanitise their hands, put loose items in the boxes and sit in every second seat on the circular platform. Every other seat had been closed off with green tape, which was not to be touched. Once everyone was seated and locked in, the controller, wearing PPE, came along and pulled each safety bar to make sure it was securely shut, turning his face away as he did.

Apart from that, the ride worked as normal and had all the classic hallmarks of the amusement park: the nervous smiles of the passengers as the ride slowly started, gradually growing into fully fledged shrieks as the Stratosphere swung them 200 feet into the sky like a giant 360 degree pendulum.

There appeared to be more staff than guests, peering from behind masks and food carts and carnival games, attentive and ready to serve the infrequent customers. Other than sanitising, there was little for them to do. One danced behind the hotdog stand. All of them seemed happy to be there – finally out of their bubbles and back at work.

“It’s awesome to be back,” said the staff member working the laughing clown game. “Especially in our department, we all missed it so much. And this is way more people than we were expecting.”

I looked over the central courtyard and the main events stage, where two of the costumed talent performed to about four people dispersed among 20 picnic tables – a gloomy contrast with the heaving and frenzied park I knew from memory. But then on the first day of trialling a new safety system, it was probably ideal.

When I met Rainbow’s End CEO Karen Crabb at her office above the arcade, she told me 200 guests had come through the door on the first day back.

“We wanted to make sure we were in a really good place,” she said. “So we’ve had a nice amount of people through the park today and we’re getting everybody trained and practiced and making sure we’re in a good spot. We’re really happy and we’ll just keep building from here.”

For the foreseeable future, the park’s admittance will be capped at 40% of its usual 2,500 daily capacity.

“We will see how we go. What we don’t want to do is create huge lines, so we’re really comfortable with 1,000 people, about 40%, we can service that.”

Crabb said preparations to reopen Rainbow’s End had begun the same day it closed on March 15. Over $1.2m in wage subsidy was paid out to 240 staff, who were given online public health and hygiene training while in lockdown. In level three they came back to the park to continue learning the new protocol. For workers in an amusement park where health and safety was already paramount, it was a simple transition to make.

Almost 400,000 guests, most of them local, visited Rainbow’s End last year. Although many businesses were now facing a potentially fragile market with nervous customers, Crabb was confident the nostalgic appeal of the park, and its commitment to safety, would gradually draw more visitors back.

“It will slowly build. New Zealand has done a great job to get on top of this, and as we move through the levels people are looking to do more things, they’re getting more confident. And it’s a special place. People who’ve grown up in Auckland came here when they were kids, and they want to bring their kids and grandkids back with them. And most importantly, we know that people just want to come out and have some fun.”