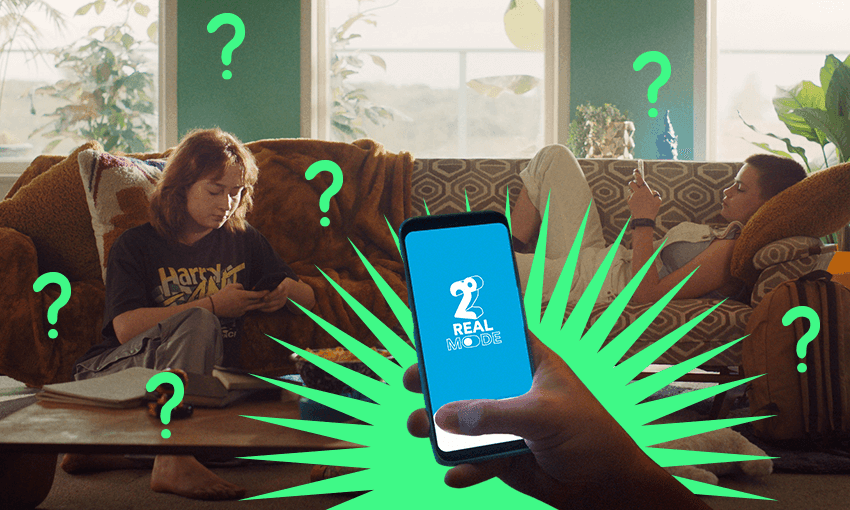 On your device too much? An image from 2Degrees’ Real Mode campaign. Treatment: Archi Banal

Why is my phone company telling me not to use my phone?

On your device too much? An image from 2Degrees’ Real Mode campaign. Treatment: Archi Banal

In a bold move, a telecommunications company is telling customers to use its products less. Why?

In a West Auckland cinema, while waiting for The Batman to start, someone told me to get off my phone. It wasn’t the usher, or the people sitting behind me, or my wife, although she’s usually all too happy to shove an elbow into my ribs at the sight of any inappropriate cellphone usage.

There, on the big screen, was a message from the very people who sold me my phone and supply me with the mobile data that allows me to check my emails while I’m waiting for a film about Robert Pattinson’s chin to start.

Unlike most ads, 2degrees was not encouraging me to use its products more. Instead, it wanted me to use them … less.

“Are we getting closer, or are we letting our time together just TikTok away?” a voiceover said, as a couple in bed put their phones away, fell asleep, then picked them up again as soon as they woke.

It connected. I’ve been guilty of doing that, and guilty is how I felt.

“Let’s live life unfiltered sometimes,” the attention-grabbing ad continued. “Just give our thumbs a rest.” Then it said: “Let’s switch off our phones for a bit.”

As my thumbs hovered over apps designed by mega-rich Silicon Valley bro-dudes, coloured by dopamine-inducing splashes of blues and reds, powered by machine-driven AI algorithms designed to inhabit the human brain for as long as possible so it can feed it targeted advertising, I had a thought.

It was probably the wrong thought, but here it is anyway: Why would my phone company tell me not to use my phone?

Dave Pearce’s grin says it all. I’ve video-called 2degrees’ head of brand to ask him this exact question. He agrees it reads like a riddle, and he’s tickled that a journalist has called him to try and solve it. “Why’s a phone company going, ‘Don’t use your phone all the time?'” he laughs. “It’s a bit of a head-scratcher.”

That, though, is entirely the point. Real thought has gone into Real Mode, an app that offers customers a chance to take a break from their phones. It works like this: when you’re in a situation where you don’t want to be distracted, like a date with Pattinson’s jawline, you can turn Real Mode on and engage untethered to your phone.

The more you use it, the more chances you have to win prizes, like movie tickets, or restaurant vouchers.

We all know letting algorithms take over your life isn’t good for you. The guy who designed Facebook’s “like” button won’t let his own kids use it. So why do we need a phone to tell us this? “With the pandemic, and the pace of change in the way that we live and work, it is quite hard to get that right balance,” says Pearce. “This is a nudge and a tool for people to think about how they’re using [their phones].”

Real Mode lands as the “time well spent” movement grows. Apple’s Focus mode allows users to set times when notifications are kept to a minimum, and Do Not Disturb does the same thing during set hours for sleep. Facebook and Instagram offer users the option to set limits and snooze times too.

But a telecommunications company doing it feels different. They’re in the business of selling phones and plans. It could cost them money. Pearce agrees it might, and staff had many discussions about it. “We did have some curly questions,” he says. “We decided that if a couple of people used a little less data because they’re in Real Mode, we’re cool with that.”

Are they the good guys? Maybe, but there’s definitely some PR woo-woo involved. Pearce is a marketing man, and this is all part of his marketing plan. The Real Mode campaign harks back to 2degrees’ early days as disrupters calling out competitors for their high prices and crap service.

This time, there’s a wider lens. Pearce feels that Real Mode is a way of honouring the business’s core values. “This is not something that is intended to drive sales tomorrow,” he says. “We think it’s a good way of telling people why 2degrees exists and who we are in a way that’s a bit different probably to what a Spark or a Vodafone would do.”

The numbers suggest it’s here to stay. Since Real Mode launched in February, more than 8000 people have spent 4.68 million minutes in it. That’s an equivalent saving of 8.5 years of doom-scrolling.  Pearce is happy with that figure. “We love devices, we think they’re awesome,” he says. “Having a role in helping people … get that balance right felt like the right thing to do.”

Some definitely don’t get the message, and don’t want to be told what to do. “The irony of posting this on FB,” noted one commenter on a recent 2degrees post promoting the service. But Pearce says it’s not about enforcing “real life” on cellphone diehards. Real Mode won’t block calls, or turn off notifications.

Instead, it’s a gentle reminder about balance. “It’s about encouraging people to have a think about when they’re using [phones] and where they’re using them.” He’s been using Real Mode himself, and he’s stopped checking the football scores around his kids. “When I sit down to watch telly with my wife, it’s nicer to be in the moment rather than double-screening.”

I can’t help but feel that’s a dig, at me, sitting at the movies, looking at my phone. I can’t promise I won’t do it again. But I did not look at it once during all three hours of The Batman. So I can assure you of this, because I was present and engaged: Pattinson’s chin is spectacular, a jawline for the ages.