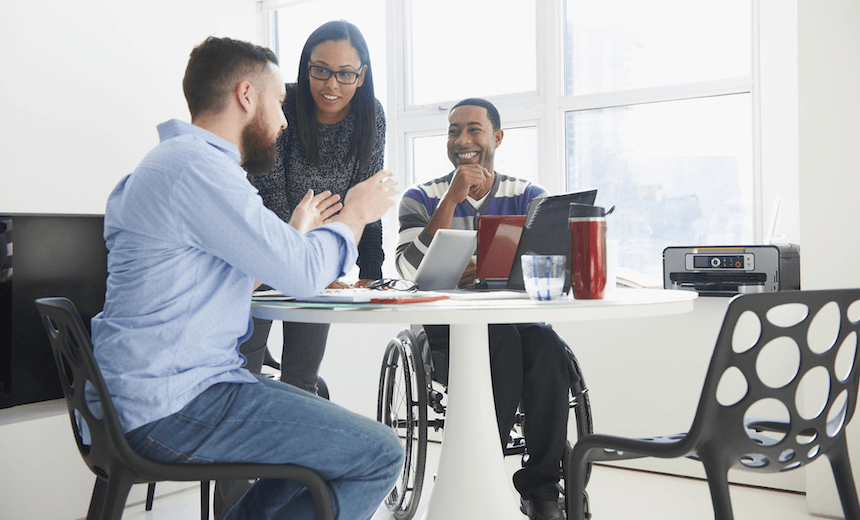 The too hard basket: Breaking the link between disability and poverty

Less than half of New Zealanders with disabilities are in paid employment. New research from the Maxim Institute suggests employers are missing out by assuming there will be a cost to accommodating an employee with a disability.

Imagine a person who’s a father, a teacher and a musician. He’s also blind. How do you think he’s usually described by other people? In the words of the man himself, most people will “put the blind first”. We heard this story and many others like it when we started our research into poverty, disability, and employment; examples of the battle against perception that confronts people with disabilities when they’re looking for work. It’s one of the reasons that only 40% of New Zealanders with disabilities are in paid employment. Of the remaining 60%, three quarters want to work but don’t have a job. So, what’s in their way?

Many people aren’t aware there’s a problem. We’ve been researching poverty policy for four years and we’ve noticed people with disabilities typically don’t feature in these discussions. That’s despite the strong connection between disability and poverty, and despite the fact that nearly a quarter of New Zealanders live with some form of disability. Often, someone with a disability has higher living costs — like more expensive forms of transport — and lower income because they’re more likely to be in lower-paid, part-time work or on a benefit.

Second, there are barriers to employment that stop many people with disabilities from using their talents and abilities and supporting themselves through work. Some of these barriers are obvious and some are more hidden. Whatever shape they take, they can block a crucial pathway out of poverty for many people. Paid work provides income that helps people meet their needs, and also allows many to participate in society.

As one person with a disability told us, “when I work it gets me up in the morning. It gives me something to do. It gives me meaning, and hope and a purpose”. Of course, work is not the only way out of poverty, and it’s not the best option for everyone. But as UK charity and care provider Leonard Cheshire Disability has pointed out, just as it is “wrong to expect people who cannot work to do so,” it is also “wrong to exclude people who do want to work from doing so”.

When we think about obvious barriers, we’re likely to think about making workplaces accessible. Wheelchair ramps and accessible bathrooms are highly visible examples. But just as disability is much broader than the stereotype of a person in a wheelchair — according to the UN, it includes “physical, mental, intellectual, [and] sensory impairments” — so the range of accessibility issues is also broad. For example, someone with a visual impairment may find a workplace inaccessible without screen reader software, while a workplace that doesn’t allow flexible hours may be inaccessible to someone with a condition that causes fluctuating energy levels.

Employers’ perceptions can be less obvious, but very significant, barriers. Research from the Disabled Persons Assembly shows “qualifications do not necessarily equate to success in obtaining a job or progressing in employment,” and “disabled people commented that their skills were often overlooked because of their disability”. Too often, it seems, someone looks at a prospective employee and sees the disability instead of the person. The good news is that it may be easier than most employers realise to employ someone with a disability.

To begin with, only 10% of employees with disabilities need accommodation in their workplace. International evidence shows most accommodations either cost nothing — like allowing flexible work hours — or cost just a few hundreds (not thousands) of dollars. If there is a cost, employment service Workbridge administers a Job Support Fund to help cover it. There are also benefits to employers that can more than offset any costs. Employees with disabilities are known to be loyal and committed, and research shows they tend to be “better than average employees on reliability factors (attendance and sick leave) and employee maintenance factors (recruitment, safety, insurance costs)”.

Equipped with this kind of information, employers may be more willing to hire someone with a disability. Here’s where the Government can also step-up. Employers need to see success stories that demonstrate what’s possible, and a public education campaign could provide them. There are some great stories available already, but they need a larger audience. The Government also implemented an Employer Advice Line earlier this year, which provides on-call support for someone employing a person with a disability, and it could promote the advice line more widely so employers can have more confidence in hiring people with disabilities.

Now imagine you’re an employer with someone loyal, enthusiastic, and productive in your team, and that person has an accident or an illness that leaves them with a disability. Most employers would do everything they can to help that person remain a valued member of their team, and rightly so. But it invites the question: if you’ll do that for someone you know who ends up with a disability, why not extend the same support to a potential employee who already has a disability?

It’s easier to put the person first when you start with someone you know in mind. That impetus towards inclusion is a positive influence that encourages employers and colleagues to be flexible in finding accommodations and solutions for that person’s individual needs. The changing nature of work means flexibility is a feature of more and more workplaces, and harnessing this change can create more opportunities for employees with disabilities. As we heard during our research, “flexibility gives people control over how they work. They can adapt it to their abilities. That’s a big incentive and enabler to get people with disabilities into work”.

We believe there’s an opportunity and a need for the Government to catalyse a cohesive strategy for employing people with disabilities, bringing together issues like the ones we’ve mentioned above and others that are in our most recent research report. We’d like to see the Government, disability advocates, employers, and people with disabilities themselves come to a common table and collaborate to overcome the barriers.

If we understand that disability is part of “the human condition”, to quote a paper from the European Commission, then we’ll immediately understand that everyone wins when we build a society that’s founded on inclusion, participation and recognition of everyone’s dignity and abilities. As we said earlier, nearly a quarter of New Zealanders have a disability. These are our family, friends, neighbours, colleagues, and people we pass in the street—in other words, people we rub shoulders with almost every day. Removing barriers from their path is the right thing to do. It may also be easier than we think.

Acknowledging Ability is the first paper in an ongoing research project from the Maxim Institute on poverty, disability, and employment. We are indebted to the New Zealanders living with disabilities who shared their experiences and wisdom with us in meetings around the country throughout the course of this project. The Maxim Institute is an independent think tank.