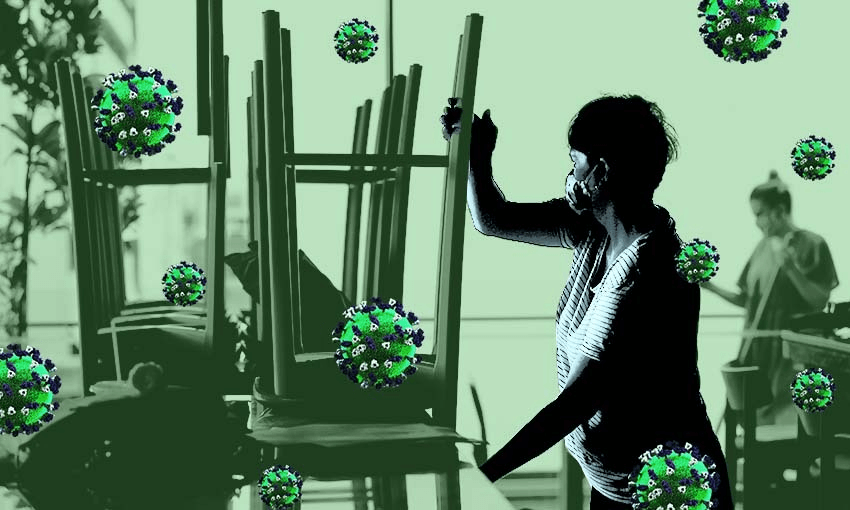 The finish line has moved further out, again. If we want to keep everyone on board with ongoing public health measures, we have to work harder to soften their impacts – particularly for those most affected, writes economist Richard Meade.

Just when we patted ourselves on the back for hitting 90% double-vaccinated adults and started opening up for summer, omicron clawed at our door. Judging by the experience in Europe, the pandemic is about to stomp on the accelerator. Delta is so last year.

Even if omicron proves more benign than delta, it is spreading much faster. A lower hospitalisation rate applied to skyrocketing case numbers still has the potential to max out our ICU capacity. And we already know that being double-vaxxed isn’t enough to keep omicron at bay, so a rapid rollout of third jabs has raced up many countries’ Christmas lists.

We are not back to square one, but the finish line has just moved further out, again. We have to assume the months ahead will involve reruns of public health measures like lockdowns as much as of summer favourites. At the very least, the risk of incaution leading to omicron running wild means we have reason to buy as much time as possible to assess which way things are about to head, and to get ahead of them as much as we can. The director general of health is apparently taking a much-earned summer holiday. He deserves it, and we should wish him luck.

So here’s the problem. Omicron arrives partway through this pandemic marathon. We’ve learnt a lot about how to keep functioning as much as we can while keeping transmission in check. But recent protests show that many are frustrated with the pandemic, and reluctant to adopt measures that protect them let alone others.

And while most of the economy has remained buoyant, key people-facing sectors like hospitality and tourism have carried a disproportionate burden from public health restrictions designed to protect others as much as them. Their legs were already aching from running the earlier stages of the marathon, especially in Auckland. Now they are looking at some unexpected hill climbs, on top of a more distant finish line, and the likelihood of further laps being required.

This means that if we want to keep everyone on board with ongoing public health measures, we have to work harder to soften their impacts, particularly for those most affected. We might be able to assume ongoing goodwill from the sectors that have endured restrictions at relatively little cost. But we can’t do so for those for whom restrictions have proven especially costly, and whose goodwill is running out or is already exhausted. In short, we need public health measures to be accompanied by support measures that are effective, and which reach those most in need.

Until now our flagship economic support measures have been wage subsidies and resurgence support payments. Being direct transfers of public funds, they are costly. Being related to employee numbers rather than foregone profits they are also poorly targeted, and provide support that is little correlated with need. Worse still, with the move to the traffic light system, government has signalled that these measures are to be wound back. It has made no promise of future support, either for businesses already struggling in the face of a shortened pre-Christmas trading period and impending summer slowdowns, let alone for those who might be hardest hit by omicron responses.

Just when those businesses have been exhausted by previous pandemic responses, they face some lonely choices about whether or not to keep running. If ever they needed a boost it is now, with the finish line now even less in sight than previously.

I have previously outlined an economic support measure that is more cost-effective than wage subsidies and resurgence support payments, and which both provides more effective support, and is better targeted to those in need. It involves businesses facing pandemic-related revenue falls being able to access low-cost financing up to the level of their pre-pandemic revenues, as and when they need it. Being proportional to revenues and not employee numbers, such financing offers more effective support to those who need it most.

Businesses can access such financing in the midst of a pandemic of unknown severity or duration confident in the knowledge that they will only need to repay it as and when their revenues recover (ie when they have the money to make repayments). This is because repayments are made through future tax surcharges, along the lines of student loans. Such a support measure is very well targeted, since if businesses don’t need it, they wouldn’t access it. Why vote to personally face higher future taxes if you don’t need to?

The government is now considering such a measure, though no announcements have been made. Committing to such a measure now, even if final details are yet to be ironed out, would offer much-needed support to the businesses most affected by past, recent and impending public health measures – measures that we all benefit from, but which impose much heavier financial burdens on some than on others. They would know help is coming, even if it is not quite here. Doing so would offer hope that there is a way for our most affected businesses to financially survive the months ahead. For many businesses that would be a great addition to otherwise bare Christmas trees.