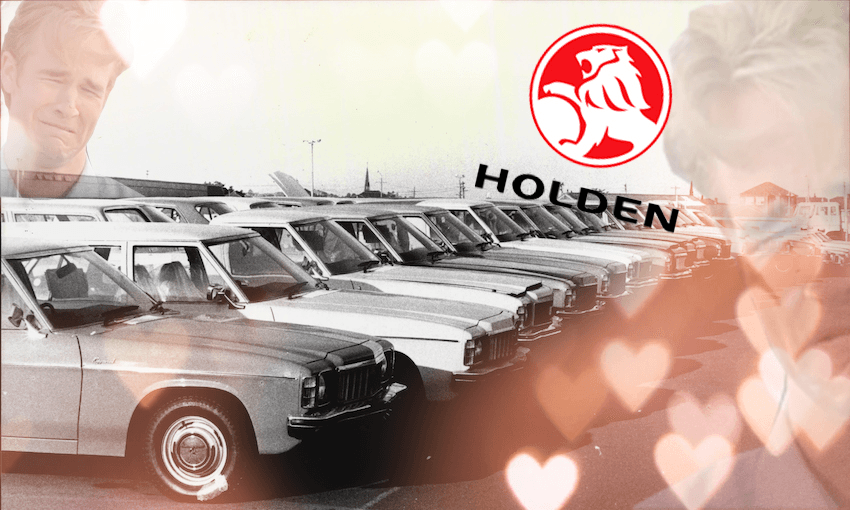 RIP you good thing: A love letter to Holden

He thought he’d moved on, but the news the Holden brand was being killed off hit Trevor McKewen harder than he expected. Here he reminisces about a youthful infatuation that never quite burned out.

A part of me died this week and I didn’t see it coming.

Holden has shut up shop permanently. American parent General Motors has killed the Holden brand. An iconic name in Australia and New Zealand has been stopped dead in its tracks.

I’ll be honest. I haven’t been much interested in motorsport for at least 20 years. But I once was besotted with it. My early years were spent in Levin which, way before the days of Manfeild, once had a motor racing track. It hosted an open-wheeler series that featured some of the biggest names in international sport including massive F1 icons such as Jackie Stewart and Jim Clark.

But as an impressionable kid of 11 or 12, I was far more captivated by the touring cars. The sorts of cars you could actually buy and drive on the streets. My heroes were drivers like Leo Geoghegan, who once drove E38 and E49 Valiant Chargers, a car I was besotted with. There was a young Kiwi driver named Jim Richards who captured my admiration, as well as another star in the making named Charlie O’Brien, who remains the youngest-ever winner of a round of the Australian touring car championship.

I really liked Charlie. In the mid to late 1970s, he was shaking up the big names in Australian motorsport of the time. Names like Ford’s Allan Moffat, and Colin Bond. Charlie drove for Holden and my love for him as a teenager was such that I was prepared to dump my flirtation with the Chargers of my world (that was helped by one of the ugliest cars I’ve ever seen, the Fiat 125, which somehow embarrassed my big toy Chargers one year in Levin… at that stage I didn’t understand that the tiny Levin track massively advantaged the pygmy Italian box car, with the Valiant never ever getting to full throttle).

When we moved to Queensland’s Gold Coast in the mid-1970s, I walked straight into the heyday of Australian touring cars with names such as Moffat, Bond and a young Peter Brock, all being shaken up by the likes of O’Brien and Richards, the forerunners of the current wave of Kiwi Supercar stars such as Shane van Gisbergen and Holden’s Scott McLaughlin.

But it was clearly a Ford v Holden bottle. Other manufacturers, including the Valiant Charger and the pathetic Fiat, were also-rans.

I chose Holden because of Charlie, and because everybody was saying this guy Brock was going to be a superstar. And he drove for Holden too. Such was my dedication that I decided I wanted to be a motor mechanic. I was convinced I’d become a Holden touring car driver so I had to work on Holdens. I got a job as an apprentice grease monkey at 16 years old, working for a Holden dealership in Southport called Lockhart Motors.

The romance of motorsport quickly wore off. A dozen grease and oil changes a day, sweating your arse off in 30 degree-plus heat in red overalls, manning the bowsers (petrol pumps) and being sent to the spare parts division by grizzled old mechanics with a smirk on their face as they told you to get a “can of striped paint” eventually wore me down.

Surfing caught my heart instead. But it didn’t stop me from making sure the first car I ever bought was a Holden – a 1965 HD station wagon that I promptly added mag wheels to, and even purple curtains that I could string along the back in misplaced optimism. It wasn’t much later that I wrote if off when, with my two younger brothers alongside me on the front bench seat with a “three-on-the-column” gearshift, I dropped a hot meat pie on my thigh, panicked and pranged into the side of a brick wall near Burleigh Heads (our surfboards flew off the roof racks into the middle of the Gold Coast Highway and were promptly run over by following cars. My brothers have still not forgiven me, more than 40 years on).

I shelved my dream of being a touring car driver for Holden in forlorn pursuit of becoming a superstar pro surfer. But my love affair with Holden didn’t end. I religiously watched the annual touring car showdown, cheering relentlessly for Holden against Ford. I cheered for the superstar Brock. I loved the Holden Monaro. I was initially embarrassed about the tiny Torona XU1 until Brock and Colin Bond consistently kicked Ford’s arse with it. I lived for Bathurst.

Over time, my interest waned and ended up being almost limited entirely to Bathurst (though I still enjoyed a Brock-reincarnation named Craig Lowndes consistently embarrassing Ford).

My relationship drifted as the adult years climbed. Yet I was surprised at the feeling of melancholy that overcame me when I heard the news that Holden was shutting up shop forever. The development is is a huge blow to the V8 Supercar series, whose lifeblood on both sides of the Tasman was the Holden-Ford rivalry.

Maybe Supercars will survive this. That will depend on ability to create new rivalries. But a part of my life has gone forever.

Farewell to the Lion, the red motor and a special slice of life. RIP, you good thing.