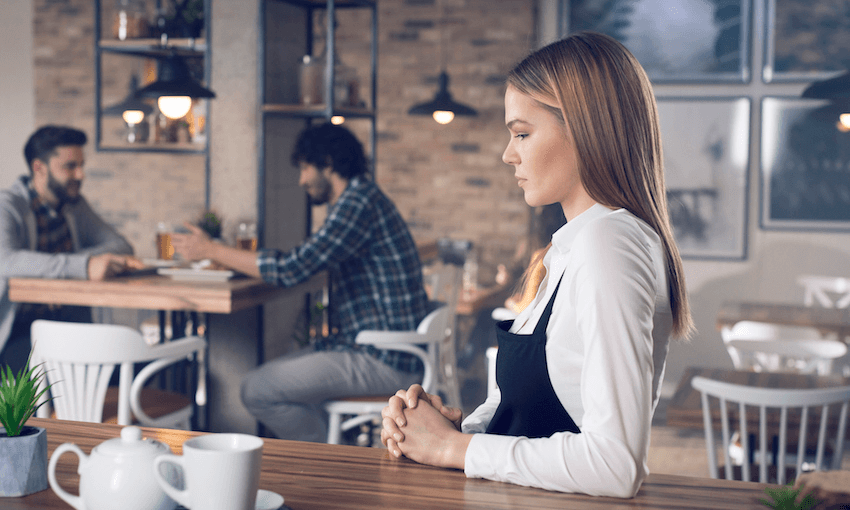 ‘Time’s up for shitty bosses’: one woman’s fight for exploited hospo workers

By Steven Walton
Guest writer
Made possible by

Chloe Ann-King wants to set up a digital union providing hospo workers with tools such as a ‘Rate My Boss’ scheme and an online pay checker.

In Chloe Ann-King’s 14 years of working in the country’s bars and restaurants she has seen staff underpaid, harassed by members of the public, and exploited by employers.

This includes being “downright assaulted” herself.

In  her view hospitality is a low-paying industry rampant with illegal exploitation and unreported sexual harassment, and she has decided to do something about it. She has launched a campaign to set up a trade union specifically for people in the hospitality industry. “Time’s up for shitty bosses,” she says.

The 2013 census found 36,000 people work in New Zealand’s hospitality sector, and the Ministry of Business, Innovation, and Employment expects that figure to grow by six thousand over the next three years.

Despite the industry’s size there is no one union representing all workers with only certain branches organised, such as fast food. Hospitality is the “wild west of workers rights”, Ann-King says.

She has wanted to organise hospitality workers for close to four years but says other unions have been resistant because they believe it’s simply too difficult.

Unite Union’s National Secretary Gerard Hehir agrees it’s a “huge challenge” to organise hospitality because of the sheer number of employers. Unite Union helps to organise some parts of hospitality, such as fast food and casino workers. However when it’s become involved with restaurants and bars it has only been able to settle immediate issues and not initiate industry-wide change, Hehir says.

Associate Professor Bernard Walker researches the role of people in organisations at Canterbury University. The private sector has suffered since the 1991 legislative change that ended compulsory unionism, he says. The law removed unions’ exclusive right to represent workers, leaving agreements to be made purely between employer and employee.

Ann-King’s dream of organising the seemingly unorganisable industry became more of a reality earlier this year when a new union representing bar and restaurant workers was launched in Victoria, Australia.

HospoVoice opened its doors in May as a digitised union. Its aim is “to turn the tables on wage theft and sexual harassment”, its website says. Ann-King paid her own way to Australia to help organise with HospoVoice, and she’s been left inspired.

HospoVoice is succeeding because it is using digital methods to engage members, she says. Its techniques include an online ‘Rate My Boss’ scheme, a harassment diary, an online pay checker so workers know how much they should be paid, and an hours log that staff can use to prove the amount they’ve worked in wage theft cases. New Zealand unions have been slow to catch onto these methods, she says.

Gerard Hehir agrees that digital processes would help, but warns that the internet is just one of many tools available for organising. “Nothing replaces an organiser turning up at a workplace,” he says.

Hospitality workers who attended the first meeting of Raise The Bar want a living wage. The Ministry of Business, Innovation, and Employment (MBIE) says the average hourly rate for hospitality workers was $18.09 last year, over $2 less than the 2017 living wage of $20.20. “Workers in hospo deserve much more than what they get,” Ann-King says.

Earlier this year HospoVoice surveyed 400 women working in Melbourne’s bars and restaurants and found 89% of them had been sexually harassed at work. Harassment is a massive problem in New Zealand too, Ann-King says.

Raise The Bar supporter Hannah Birdsall says at times during her five years of working for Auckland hospitality businesses she had been made to feel terrified by customers. Men would say “very disgusting things constantly” and she felt powerless to report any incidents because “customers are always going to take priority over temporary wait-staff”, she says.

Exploitation is also rife in hospitality, Ann-King says. Jules Courtine, another supporter of Raise The Bar, worked as a kitchen hand in Auckland earlier this year and felt there was an implicit rule that he had to stay at work past his scheduled shift time until the work was done.

Hannah Birdsall says her employer once did not pay her wages for a week,  and when the business later folded refused to hand over her holiday pay of nearly $1000.

Unite’s Hehir says he’s not at all surprised by the issues highlighted at Raise The Bar’s first meeting, and feels pay in particular is a significant concern.

Russell Gray, director of The Good Group which operates 14 hospitality venues in Auckland and Queenstown, says he doesn’t have an issue with workers’ demands for fairer pay and a safe workplace. Auckland’s booming hospitality market has a real shortage of quality staff and those with the right attitude and experience will find good employers, he says. There are “great opportunities” in New Zealand hospitality and he wants to see workers stand up for themselves. He urges them not to overlook the chance to negotiate directly with employers.

Hospitality New Zealand chief executive Vicki Lee said in a statement that her organisation works hard to support good relations between workers and employers. The organisation’s resources, legal advice, and training sessions help to ensure members are treating their employees correctly and fairly, she says.

A career in hospitality can be “wonderful, fulfilling and satisfying”, and she wants to encourage more young New Zealanders to consider it as a serious option, Lee says.

While Hehir describes Ann-King’s campaign as a good thing and wants to encourage her, she can’t do it all on her own and workers will also need to organise themselves collectively, he says.

Jules Courtine says Ann-King’s campaign is inspiring and he’s pleased people are standing up for themselves. Hannah Birdsall thinks a union would make workers more empowered to talk about the industry and take action if mistreated. She wishes “17-year-old me could have this kind of hope”.

Ann-King says she’s simply passionate about improving the working conditions of New Zealand’s hospitality industry. “All workers deserve to be safe at work and paid well,” she says.

Steven Walton is a journalism student at the New Zealand Broadcasting School.