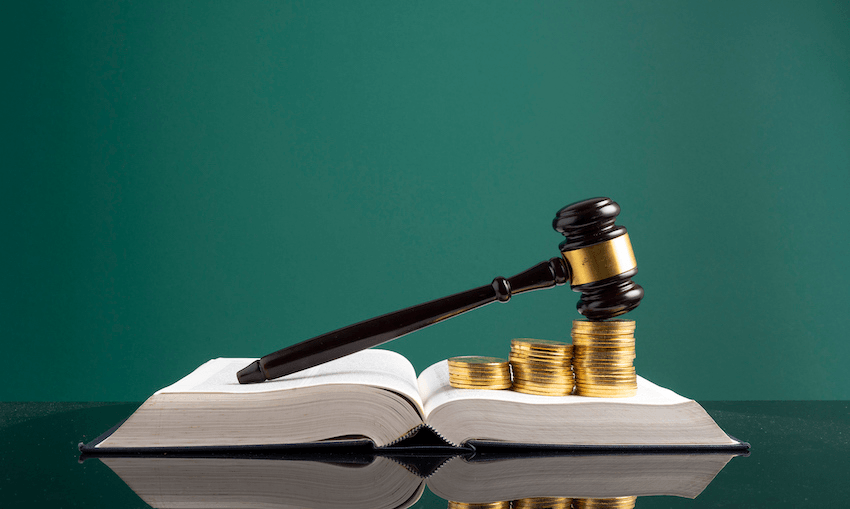 On the horror and futility that is the Disputes Tribunal

The small-claims mediation process is meant to give real people a voice, but the financial and emotional sacrifice just isn’t worth it, writes Jai Breitnauer

When we moved to the semi-rural dreamland of Te Henga (Bethell’s Beach) in 2017, we couldn’t imagine that anything would be able to tarnish the beautiful views, the incredible wildlife, the peace and tranquillity and sense of community this amazing place has. And thankfully, we were right – but our internet service provider, Blue Door, had a damn good try.

This rural specialist had promised us a ‘good’ connection, coupled with ‘old fashioned customer service’, but sadly our experience was that neither of these were forthcoming. When our complaints resulted in Blue Door cutting us off rather than resolving our problem, off to court we went.

Now, let’s make it clear, no one wants to go to the Disputes Tribunal. First and foremost, it costs money. Not much – we only paid $45 for a hearing relating to a claim under $2000, with bigger claims of up to $5000 costing $90 – but it’s still money you have to pay out to get your voice heard at a time when you feel you’ve been royally ripped off, (and for some people even that cost is prohibitively high). Second, you have to take time off work in order to attend, which for us meant losing more money that we couldn’t claim back via the tribunal. And, as our SEND child was not in school full time, we also had to pay out for childcare too. So, it was a massive inconvenience that cost us, in the end, about $450. Plus, it is very emotionally taxing.

No, we didn’t want to do it, but we felt we had no other choice. Our ISP was not a member of the Telecommunications Disputes Resolution service, which is (laughably) voluntary. All attempts at talking reasonably had failed. Our MP, Chris Penk, even got involved, bless his cottons, sending them a letter imploring them to use some common sense, but nothing worked. With every avenue closed, the Disputes Tribunal was the only road left and we walked it in good faith. But, despite the fact the tribunal ruled in our favour and ordered our ISP to pay us a small amount of money (under $1,000), we’ve been left with nothing.

I realise you must be gagging to find out why. I mean, it’s not possible, right? You go to a court of law. The court of law says you are a victim. The court orders the other party to pay recompense for the damage caused. The other party doesn’t pay up – so the court should get involved, right? Wrong. The deadline for our payment sailed past, and when I sent Blue Door an email to remind them about it they replied telling me not to contact them again unless it was via a solicitor.

“WTF!” I said. “Who do they think they are?!” I said, confident I had the full force of Henderson District Court behind me. But I can guess why Blue Door wasted our time and money (and put our autistic child through the added stress of childcare) by not bothering to turn up to the second hearing. Because they know the tribunal is toothless. If they took advice, they were likely told exactly what we were told when we emailed the tribunal to find out what they were going to do about this injustice:

The Tribunal has nothing to do with collection or payment of money. It is up to the parties to talk to each together (sic)/ to get their respective lawyers to talk to each other and organise the payment. The Tribunal’s involvement in this matter is closed.

Those are the exact words in the email I got back from Henderson District Court when I asked them what they were going to do. Incredible, right? For a start, in what universe do two parties who had to go to court to seek a resolution sit down nicely over tea and discuss the payout in a civilised matter? This was a company that wouldn’t even talk to us when we were paying them around $200 a month for an internet and phone connection not fit for purpose, so why would they communicate now they had to pay us some cash? Secondly, how do they think the average person who has already lost out on loads of wonga due to being ripped off has the money for a lawyer? The beauty of the Disputes Tribunal is meant to be, in part, that anyone can use it, no lawyer required. Finally, and most importantly, what is the point of the tribunal process at all, if they’re going to come to a decision and not enforce it?

By now, you might be feeling quite angry on our behalf. If so, you are also probably reassuring yourself that this is some sort of one-off, loophole, blue moon-esque random turn of events and when you need the tribunal yourself, it will all work out fine.

Don’t be so sure.

In June this year it was reported that former Auckland travel agent Jagadesh Gobburi had ripped off a whole pile of people through his business, even gambling away the money one customer paid him. Of course, many clients took him to the Disputes Tribunal, and of course the tribunal rule in their favour. But has he paid? Has he shit. No one has received a penny, even though he owes thousands. If these poor souls want to pursue Gobburi for their money, they will have to stump up even more of their own hard earned cash to pay for more legal processes that, in all honesty, seem just as toothless as the tribunal. Most of them have given up.

Just last month, another report emerged about builder Sanjay Kumar of One Call Renovation in South Auckland. This cowboy took $10k and $15k off two different families, made a huge mess of their homes and then disappeared into the night. One family had taken him to the tribunal where he was ordered to pay them $15,000, but they have not seen a cent.

In April it came to light that Brent Smith of Auckland car dealer Motor Me had been taken to the tribunal by several disgruntled customers who bought crappy cars, but despite being ordered to pay out, many of his former clients had not received the compensation awarded. In this story, many legal types commented about how frustrating and woolly the Disputes Tribunal is.

“You’re lucky if the debtor pays but if they don’t, you have to engage in further legal procedures in order to get payment,” said Helen Dervan, a senior law lecturer at AUT.

“In many instances chasing a bad debt is an exercise in futility to spend a lot of money,” said lawyer Dennis Jenkin. “You will always have ratbags and some of them masquerade as car dealers and other things and they will hide behind whatever the law can give them by way of protection.”

If the person or business who owes you money refuses to pay, even after being told to by the Disputes Tribunal, the avenues open to you are costly, time consuming and limited. For example, you could apply for an attachment order at a cost of $50. If successful, this would enable to court to ask the debtor’s employer to repay the money owed directly from their salary. But this only works if the person is employed, and doesn’t seem to apply if your grievance is with a company. You could also apply for a financial assessment hearing, but the rules around this are complicated and no one at the district court was prepared to explain them to me. It seems to involve another hearing, and costs $130 or $180, but I can’t afford to pay a lawyer to give me advice on how to proceed. Another option touted is filing for a warrant to seize property. The cost is $200, but it appears you need to state what you want to be seized, and provide evidence the debtor owns it, and in all honesty, I don’t want three laptops that I’d have to sell myself on Trade Me. I just want the money I was actually awarded.

Right now, I’m not sure what action I am going to take to retrieve the money owning to me by Blue Door, but quite frankly I’m more incensed that I’ve bothered to go through this process at all. I’m even higher, drier, and more out of pocket than I was before. New Zealand desperately needs to review its processes around the Disputes Tribunal, and how it is enforced, otherwise they’re just giving businesses a get out of jail free card to keep ripping people off.

Blue Door managing director Mark Anderson declined to comment except to threaten legal action against the author and The Spinoff.