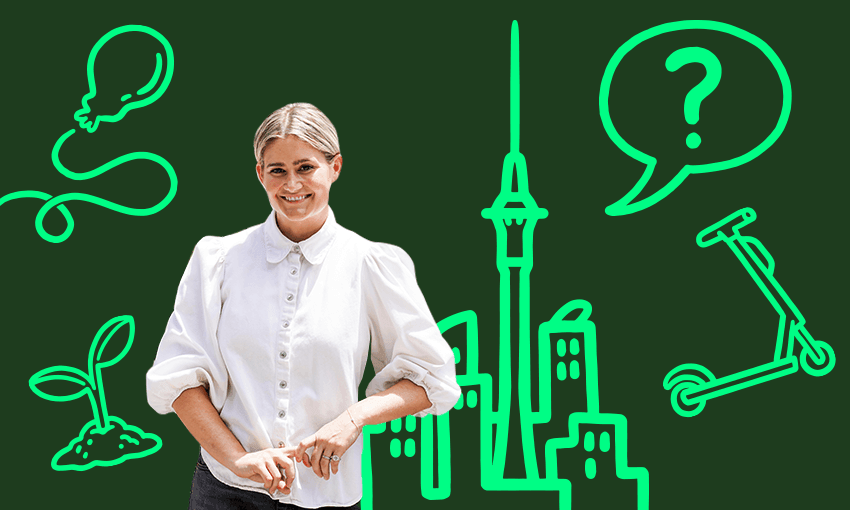 What will Auckland be like in 2070? It’s time to let the kids decide

New Zealand’s biggest city needs to become world class. A key contributor to a new report says it can’t do that without involving youth.

A smooth public transport system. Dynamic tech and AI infrastructure. A transport network leading directly to disparate suburbs and cultural hubs. A showcase of diversity, so much so that you wouldn’t need to fly overseas to experience Asia, or South America, or India. Fewer parks, far fewer cars. A huge focus on the environment.

What should Tāmaki Makaurau look like in 2070? At a workshop in April last year, where bowls of pick n mix lollies and pizza sat on tables, that question was asked of a select group of rangitahi. They represented a swathe of Auckland’s rising generation: a diverse mix of cultures covering those in their final years at school, university students and 20-somethings embarking on their careers.

Izzy Fenwick, one of three advisers chairing that panel, describes a mix of hope and frustration in the room. For many, it was the first time they’d been asked their thoughts on the future of the city they’re living in. “They see a different way of doing things, but don’t have any power to change,” says Fenwick. “They haven’t been given any governance in the past.”

That could be about to change. A new report released today examines Auckland’s future and asks how the city can grow to become world class by 2070. From Koi Tū: The Centre for Informed Futures, Reimagining Tāmaki Makaurau Auckland: Harnessing the Region’s Potential, doesn’t hold back, suggesting nine key areas the city needs to address to fulfill its potential.

It’s provocative, for sure. The report includes the sentence: “Auckland’s diverse population is becoming increasingly isolated from and confused by decisions made about them and for them.” It points out high rates of apathy thanks to low turnout rates in local body elections. It also recommends rebuilding Auckland’s structures for governance, management, planning and funding. Auckland Council staff might wake up a little worried today.

But one section in particular stands out. On page 78, the report recommends the creation of a Commissioner for Future Generations. That means someone committed to liaising between what the kids want, and those that can make it happen. It is, believes Fenwick, the “the pièce de résistance” of the report, the missing link that will allow Auckland to become world class.

Why’s it important? If kids aren’t involved in planning the city’s future, Fenwick believes they’ll simply disappear overseas. “It would be a devastating loss if we couldn’t keep our future talent here,” she says. “New Zealanders are known all over the world for their work ethic, creativity and initiation. If those expectations aren’t met, they’ll go somewhere else.”

There’s no denying Auckland is at a crossroads. Covid-19 has sent a wrecking ball through the city centre. House prices have created a generational divide. Decades of lacklustre investment in public transport are evident all over the city. Gridlock is becoming unbearable, especially with the high level of development out west. With petrol prices skyrocketing, a city reliant on cars driven by fossil fuels is no longer a viable long-term option.

The kids have answers for all that. They see an Auckland that no longer revolves around the central city. Queen Street is out, the ‘burbs are in. What’s hot? Dominion Road, Mt Albert, and South Auckland, for starters. “What would it mean to redesign our public transport system to take people to places where there were really interesting and innovative things happening?” asks Fenwick. “How do we allow access to the pockets of awesome that are happening all over the place?”

They see a city that offers residents the ability to travel around the world, while staying at home. Chinese eateries in Balmoral, and Indian in Mt Albert, could be the basis for cultural hubs, similar to Sydney’s China Town, or Melbourne’s Little India. “We create a whole experience … you walk into that country and become fully immersed in that space,” says Fenwick. “Wouldn’t that be a great way to create a deeper connection between New Zealanders?”

They’re big questions, for sure. At the heart of their responses is climate change. “Future generations know they’re going to have to live through the results of climate change,” says Fenwick. That means some of the ways we treat the environment now will be unacceptable in the future. “Everyone having their own car, or driving down the road or to the supermarket, the next generation is going to think that’s a completely unacceptable way of living.”

This is an issue close to Fenwick’s heart. At 32, the daughter of environmentalist Sir Rob Fenwick is so passionate about involving youth in future decision-making that she started the platform Fenwick Group to do exactly that. It’s also why she was involved in the report. She says it’s a warning shot, and is under no illusion what happens if it falls on deaf ears. “It’s going to end up being be a piece of beautiful fiction if we don’t create the action to bring this to fruition,” she says.

It depends on what we want Auckland to become. Fenwick remains hopeful, but says without involving kids, Auckland “won’t be able to hold on to that talent, it won’t be a world class city, it just won’t be enough anymore”. The worst case scenario? Auckland being left to its own devices. “What’s Auckland going to be if we just leave it to develop itself? I don’t have a lot of hope for that city.”