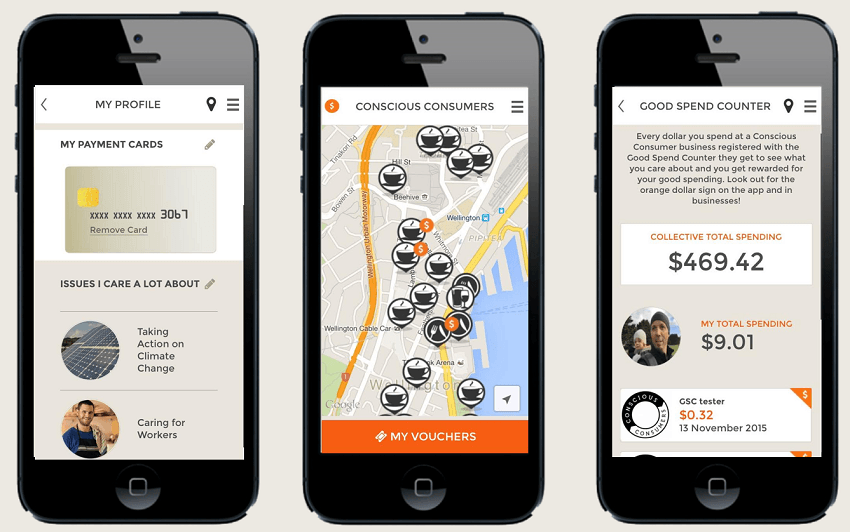 Conscious Consumers is planning to take their app to the UK in 2018 (Akina.org.nz)

The rise of conscious (and convenient) consumerism

Conscious Consumers is planning to take their app to the UK in 2018 (Akina.org.nz)

‘Vote with your wallet’ they say, which is why Conscious Consumers wants to make sure you cast your vote in the right place by linking your values to the businesses that match them. Jihee Junn talks to co-founder and CEO Ben Gleisner about turning ethical consumerism into a mainstream reality.

Christmas time turns us all into rabid consumers – even the biggest Grinch among us has to make frantic trips to the mall for last minute presents.

In fact, $6 billion was how much Kiwi shoppers spent in December last year – the highest-ever monthly figure recorded by Statistics NZ. And if the rising trend of spending this month is anything to go by, that might just be a record on the verge of being broken a second time around.

“Cash rules everything around me” someone wisely once said, which is why every purchase we make nowadays signifies a whole lot more than just an exchange of goods. Organisations and activists urge consumers to ‘vote with their wallets’, which is to speak to businesses in the language they understand best – the language of money. After all, the customer is king; or more accurately put, their bank accounts are.

When Ben Gleisner and Melissa Key founded Conscious Consumers back in 2009, they were guided by the belief that finding businesses that aligned with their values could be so much more easier than it was at the time. “The idea from the beginning was to make it easier for the consumer because a lot of people care about stuff, but part of the reason they don’t act on their values is because it takes too much time and hassle,” Gleisner says.

With a mission to enable consumers to vote with their wallets quicker and easier, they started putting little badges on the windows of cafes in Wellington’s Cuba Street to let customers know that this was a business employing ethical values like free-range eggs, fairtrade coffee and living wage employment. It was all rather low-tech and manual at the start, operating on a voluntary basis for participating businesses for the first four or five years.

“[Then] we realised [around 2014] that while being on an app and having your own sustainability credentials was cool, it wasn’t really driving as much change as we wanted,” recalls Gleisner. “So in 2015, we raised $100,000 through crowdfunding and built this really innovative bit of technology [called The Good Spend Counter] where consumers could pick what they cared about and link their debit/credit/EFTPOS card to their profile. This meant you could turn every dollar that you spend into a vote for a better world because businesses could see what you cared about.”

There’s a reason why technology like The Good Spend Counter has become so integral to the success of Conscious Consumers’ business. That’s because while the value of using the service has always been there from the consumer’s perspective, it could be argued that the pay off for businesses wasn’t quite the same. Getting accredited with ethical kudos can sometimes be employed as more of a marketing scheme than a genuine pivot towards change, which is why putting numbers, data and spend behind Conscious Consumers’ offering meant companies now had a more tangible method of understanding their customers that could be quantified into dollars and cents.

“In many ways, we’re a data company now as well,” says Gleisner. “We want to create a dataset of interesting insights on consumers, but also use those insights in a way that businesses can tell those stories back to people about their sustainability and make them credible.”

“Businesses in my mind are massively underinvesting in things like operational changes, and mostly that’s because there’s no signal from their customers or the market that these changes could have real potential to benefit their sales,” he says.

Like any sort of large data set (there are currently 12,000 people on the app with their values added), certain trends and themes can quickly be gleaned about the attitudes of the people that use it. Waste minimisation, for example, is the number one issue pretty much everywhere in New Zealand all of the time. Meanwhile, something like climate change seems to matter a whole lot more to people in Wellington (second most important) than it does for people in Auckland (fifth most important).

For an initiative that started out with a handful of small sustainable businesses on Wellington’s Cuba Street, Conscious Consumers is now mingling with some of the biggest players in the industry, striking up a partnership with Meridian Energy and having businesses like New World, Z, Kathmandu and Life Pharmacy on its growing roster. And while things have only just started to get big here in New Zealand, Gleisner and his team already have plans to go global, announcing in September that it’s planning to raise $3 million to help launch the app in the UK next year.

“In seven years’ time… we’d like to be a big global platform with a hundred million plus users,” he says. “More than $300,000 is spent on our platform by consumers every month, but we’d like that to be $10 million [one day].”

But before that day comes, there’s Christmas to think about, and Gleisner has some choice tips on how to be a good person and still enjoy this ridiculous festive season anyway.

“The most important thing is asking questions like ‘where does what I’m buying come from?’, ‘what are the implications of me buying this?’ and ‘I wonder what’s going to happen to this when I can’t use it anymore?'”

“Then there’s standard stuff like reducing packaging and gifting experiences that other people can benefit from. We’d also advocate looking for certifications when buying products… but look for those by independent third-parties to give you that assurance that it’s legitimately doing some good in the world, because what you find is that a lot of business try and sell you stuff with their own marketing rather than anything else.”

Spinoff’s business content is brought to you by our friends at Kiwibank. Kiwibank backs small to medium businesses, social enterprises and Kiwis who innovate to make good things happen.