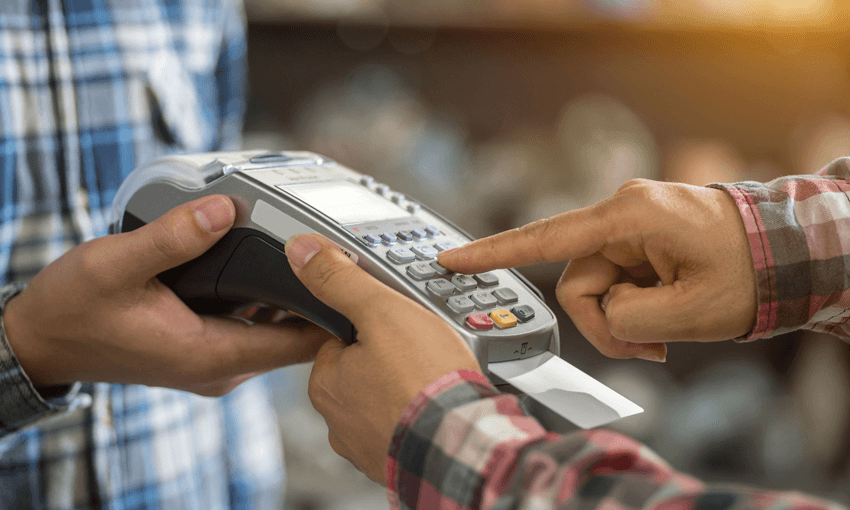 New Zealanders get charged some of the highest fees for debit and credit card use in the world and most of us don’t even realise it. Paul Brislen attempts to explain interchange – fees paid between banks for the acceptance of card based transactions.

Ah, shopping. The hunt, the choosing, the purchasing. The endorphin rush. The buyer’s remorse.

It’s all part of life’s rich tapestry and now that I’m a grown up I have a shiny credit card that comes loaded with a black stripe, chip, and wireless interface. That means I can wave it around like Lord Muck and money flows, typically (and somewhat sadly) from my account largely into those of Countdown, McDonald’s and Mount Albert Grammar School.

But that’s OK because along the way I get Airpoints and other similar baubles that let me buy stuff without spending any money at all! Thanks ASB and Air New Zealand for your largesse.

Of course, that’s not quite how it works, and what actually happens is something of a pig’s ear. New Zealand card users get charged more than just about anyone else in the world. We get to help prop up those hard-working Australian banks and American credit card companies and we do so cheerfully and willingly, all the while ignoring our ability to use our own money without incurring any fees at all.

Retail New Zealand’s annual survey looks at how much we spend in fees when shopping. Fees incurred by us, the customers, and also fees incurred by the retailer which, of course, get passed on to us.

Currently, we pay twice as much as they do in Australia, and between three and six times the rate charged in the UK. Altogether, it amounts to a tax on retail purchases that we aren’t even aware we’re paying but which goes straight to the bottom line of the banks and credit card companies.

As customers, we get charged a percentage of the transaction every time we use a credit card or when you use a debit card for a contactless payment. With credit cards, that’s probably fair enough. You’re using someone else’s money so it makes some sense that you get charged a fee for doing so.

Well, yes and no. What you say is true – you don’t get charged directly, but the merchant who is offering the service to you gets charged a percentage of the total value of the transaction. How much they get charged depends on what sort of card you’re using (gold, platinum etc) and what sort of merchant they are (corner store, Ferrari dealership, etc). Here, take a look at the fees from Visa’s website.

This is why you often see EFTPOS terminals with “no credit” stickers on them. The merchant doesn’t want to give up a variable and unmanageable amount because you chose to use this card over that card.

Merchants also pay a fee to allow you to wave your magic wand (aka your contactless debit card). That’s why we often see “no paywave” stickers.

Some retailers do pass these fees on – and there’s been a push to make them stop. But come on, sheeple, wake up! If they can’t charge you a 2% handling fee explicitly, they’ll just whack 2% on the top of every transaction and that’s no better for any of us. I’d rather see when I’m being charged a fee than just see every item cost more regardless.

But what about debit cards, I hear you say? Debit cards access your own money but when you use the contactless capability again the retailer must pay the fee (and again, that cost is eventually passed on to you, the customer).

Banks are incentivised by the credit card companies to roll out these debit cards. The banks get a cut of the money earned through these fees. That money goes to pay for those Airpoints and other goodies that you “buy” without paying for. Thanks, Air New Zealand and ASB. I love my new sneakers/wine rack/flight upgrade.

The other way is to pay with your EFTPOS card. You swipe the card through the machine, the money is transferred to the retailer’s account, you walk out with the purchased goods wrapped up in a paper bag and everyone wins.

EFTPOS solved a lot of problems for retail and banking. The banks got a safer money transfer system, the retailer got money straight into the account, the customer didn’t have to carry cash and couldn’t spend what they didn’t have. But because it doesn’t generate the fees that the credit and contactless debit cards do, it’s unloved.

Now the next wave of digital payments is upon us – and it’s a post-plastic world. App-based services that connect customer, retailer and bank accounts directly so you can pay without incurring costs already exist. The industry is working on an Open Payments Platform (OPP) that will allow the development of new services that solve new problems that we haven’t even created yet.

All of that is great news and wonderful for both retailer and shopper alike, just so long as we sort out how the charges will be introduced and manage that carefully from day one.

Disclaimer: Paymark is a client of Paul Brislen’s PR agency. This column does not represent Paymark or its views.