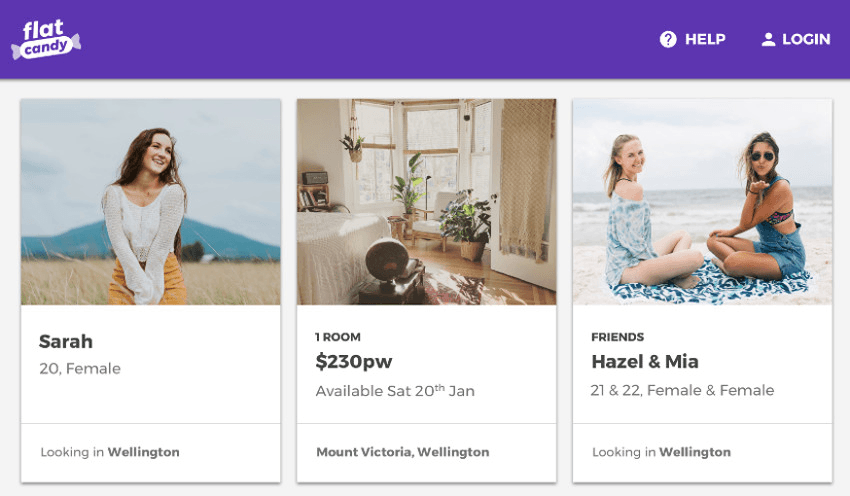 Tinder for flatmates: how Flat Candy is improving the flat-hunting experience

Rent Week 2018: A new Wellington-based service is looking to match rooms with roommates with as little pain as possible. Don Rowe talks to co-founder Brayden Gosse about Flat Candy, the so-called ‘Tinder of flatting’.

Finding a flatmate is almost universally a total pain in the arse. From listing the ads, through filtering the applicants, all the way to psychoanalysing a potential flatty in the 10 minutes they take to check out the room, filling a space takes a lot of guesswork. Flat Candy, a free online service launched in November last year, looks to change all of that.

The brainchild of three Wellingtonians currently stuck in the hellscape that is renting in New Zealand, Flat Candy aims to pair roommates with rooms with as little pain as possible. Tenants create simple profiles with their availability, budget and timeframes, linking out to their Facebook page for a final stalk before you get in touch.

Currently live in seven regions across New Zealand, but most popular in Wellington, Flat Candy recently launched the ability to list rooms as well as profiles, and its founders have plans for further features as they reach critical user mass.

So, who are you guys, and what was the impetus for Flat Candy?

There’s three of us, myself, Gus Motizuki and Finn Dinneen. Finn and I went to university together and I met Gus at my current job when he shifted over from Brazil.

The idea came from something Finn did when he was looking for flats. He created a piece of paper that had all of his details because he was finding it really hard to stand out. Lining up viewings is a mission, there’s so many people, and he wasn’t getting messages returned and all that, so he created what was essentially a renter’s CV. He took that around and handed it out at flat viewings and used it to land the flat that he’s in now. That’s where the idea came from in its simplest form, and we just took it into a digital format.

We’ve just launched the ability for people to list their rooms on the site, that’s fresh as of last week, and so a Tinder model is the direction we’re looking to head. How can we match the people through key similarities and so on, whether this person is looking to move in now, and whether this flat is available.

What was it that stressed you out about finding flats?

The competition is one of the hardest things. Sometimes you don’t get a message back, you don’t really even know if a flat is still available; it’s quite intimidating as well, going out and walking into people’s homes. Approaching people can be awkward, you don’t know if you’re telling them the right things, you don’t know if something about you is going to put them off. What do you say? What don’t you say? So what we’re trying to do is allow someone to get past most of that.

When was the site launched? Everyone is heading back to uni now –  has that affected demand?

We launched last year in November, we did a bit of testing in a small group of people, then we went public. But the timing is really good for us. We had a little bit of downtime and it’s starting to really pick up now. We’re definitely seeing a huge increase in the amount of profiles being made as word gets out about what we’re doing and, as I say, we had a bit of downtime to fix things and smooth things out so that what we’re building is reliable and not going to crash on anyone. It’s worked out perfectly for us.

One of the benefits of finding flatmates on Facebook is you have the ability to have a little bit of a stalk and get an initial impression of what sort of people you’re dealing with. What inspiration or ideas do you take from that?

As you say, when you’re looking through Facebook groups, people are writing big blurbs about themselves. But in reality you’re generally just skimming through to get to the key details – and that’s what our profiles do. We plot that information in a nice, easy to read format so you can get exactly what you’re looking for at a glance. You very quickly figure out whether this person is right for you or not.

As we head forward we’ll be adding in specific filters, creating a really nice search experience and making it easier to narrow down specifically who you’re looking for or what kind of room you’re looking for. Definitely some of the downsides of Facebook and TradeMe we’re alleviating.

What is your assessment of renting in this country in general?

It’s tough. I think there are a lot of people out there who are struggling and who need help and I’m just happy that something Finn tried a while ago, we could actually bring to life. And from that, hopefully make a difference to people’s lives, get them a place to live – and with people who they’re comfortable with. There’s good and bad and I’m just happy that we can maybe have a positive impact.