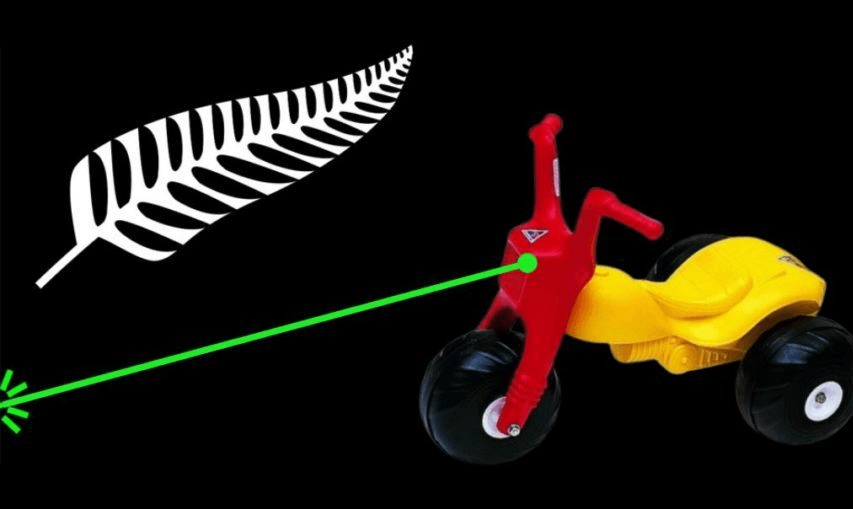 Spinoff investigation: how come every New Zealand kid had the same trike?

The red, yellow, and black trikes are everywhere. But where did they come from and how did they get here? Madeleine Chapman investigates.

Walk past any daycare centre or kindy in New Zealand and you’ll hear the sound of plastic wheels on concrete, or plastic wheels on decking. That’s the Triang A.T. Cycle, and if it’s not, it’s one of the many knock offs.

The Tri-Ang A.T. Cycle, more commonly known as “you know, the yellow and red one that everyone had”. To look upon one without a hint of nostalgia is to reveal an entrenched apathy towards the New Zealand way of life.

The trike, with its red front, yellow body, and black wheels, is instantly recognisable. But despite the A.T. Cycle’s ubiquity, its popularity appears to be entirely word of mouth, or simply handed down through the generations. In fact, very few, if any, of its current or former owners would know the three wheeled toy even had an official name.

The A.T. Cycle was created in Inglewood, just outside of New Plymouth, in 1979. In January of that year, Underwood Engineering, a family-owned toy manufacturer, purchased Triang Pedigree. The brand had originated in England under the Lines Bros umbrella, and the New Zealand arm had gone through a number of owners before the Underwoods took on what was, at the time, a diminishing line based in Auckland.

By the end of 1979, the design was finalised and the dyes were cast for the A.T. Cycle. In 1980, the first model was made available for purchase in a triple colourway: red handle, yellow body, black wheels. “A.T.” stood for “All Terrain”.

At Toyco St Lukes in 2019, Jan Barnes holds the body of an A.T. Cycle in one hand, and the handle in the other. “I couldn’t tell you how many of these I’ve assembled in my time in the toy industry.” Barnes has been selling toys for 16 years, and the iconic trike has been a bestseller for as long as she can remember. “I’ve already had two from online orders just this morning. At Christmas time they’re mega. For a first present, they’re big.”

The trike’s popularity has transcended generations, selling well upon first release in the 1980s and being equally, if not more, popular today. There are seven parents in the Spinoff offices, and all seven own (or recently donated) a plastic Triang trike. The Spinoff’s new editor-at-large, Clarke Gayford, commissioned this story by revealing that Neve’s latest toy was one yellow, red, and black tricycle. A request online for photos of the A.T. Cycle in action brought out dozens of images and stories from the past four decades. But while all the trikes in the photos were recognisable, not all were Triang.

Not all plastic trikes are created equal. Underwood Engineering, now Roundabout Distributors, owned the patents on the entire design of the A.T. Cycle except for the wheels. Since 1980, the original model has been available for purchase at toy stores around the country. But so have any number of knock-off plastic tricycles, identical in design but varying in colour. They’re impossible to tell apart, and most customers believe all three-wheeled plastic trikes to be from the same company. They’re not.

The Triang A.T. Cycle, the original model from Inglewood, is only available in two colourways; red, yellow, and black; and pink and white. Any other colourway is not an original A.T. Cycle.

It’s cheaper, though. The knock off trikes (identical but without the triangle Triang sticker on the back) for sale at The Warehouse and K-Mart are nearly half the price. There are also trikes for sale, and have been for decades, sporting an identical body but with different handles. Again, it would be easy to assume they’re all made by Triang. Barnes at Toyco knows this and believes people can tell the difference. “People are proud of the Triang name because it’s a New Zealand name, and the trikes are made in New Zealand.”

I have to tell her that actually the A.T. Cycles are now manufactured offshore. Dean Underwood, the managing director of Roundabout Distributors, confirmed that production had been moved to China, but did not provide a date for when the move happened. “That’s a shame,” said Barnes. “I think not that long ago they were still made in New Zealand.”

Underwood also revealed that after 39 years of ownership, Roundabout Distributors had this year sold the Triang Pedigree brand to Sweetpea Marketing, a family-owned toy distributor based in Auckland. When asked how many A.T. Cycles had been sold since they were first designed, Underwood didn’t have “an exact figure but it would be in the hundreds of thousands.” And did he have any funny or cool stories around the A.T. Cycles and its riders? “No.”

Underwood may not have remembered any stories but customers past and present had more than enough. The common theme was the allegedly indestructible nature of the trike. Many millennials spoke of handing their own childhood models down to their kids, and Barnes reckons it’s very often nostalgia that drives today’s purchases, with a lot of grandparents buying for their grandchildren “because they remember having it for their own children.”

On the off-chance that a wheel cracked or a bolt came loose, New Zealanders found a way to not only fix their A.T. Cycles, but upgrade them.

I tested out their indestructibility myself by conducting the only test that mattered: an adult messing around with a kids toy. Original Triang trikes are readily available on TradeMe for as little as $10, and I found one nearby immediately. Could the famous vehicle, which advertises a 17kg weight limit, handle my 84kg while going down a hill? And could my 84kg handle the inevitable crash?

Long story short, it couldn’t handle me. But it got through a handful of trips as safe as houses before an unexpected crack in the pavement left an overdue crack in my ego as well as one of the wheels. An incredibly valiant effort from the A.T. Cycle, the same trike today as it was dreamed up in 1979.