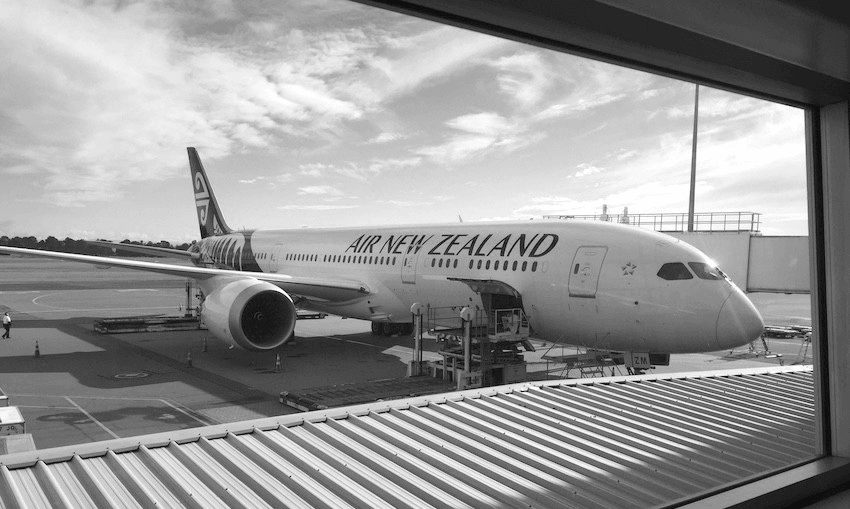 Welcome to the Cheat Sheet, a clickable, shareable, bite-sized FAQ on the news of the moment. Today, what on earth is going on with Air New Zealand’s new Boeings?

We all know long-haul travel is a particular kind of hell (with or without kids) because we’re Kiwis and everywhere is really bloody far away. Legroom is non-existent, you’re stuck at an unnatural angle for way too long and you’re also trapped in a tin can slowly filling up with airplane-food fuelled farts. It sucks.

BUT. The fancy new technology of the Boeing 787 Dreamliner (of which Air New Zealand has 11) is meant to make the ride a little bit nicer. US manufacturer Boeing says it “designed the 787 Dreamliner family with passengers in mind, right from the start. With the largest windows of any jet, cleaner, more comfortable air, a smoother ride and space for everyone’s bag, you’ll arrive feeling refreshed and ready to enjoy life”.

And look, I’ve flown in one, last week most recently. And the ride is smooth as, even in the back (the ride is noticeably lower in the back too while in the air). There is also none of that disconcerting shaking, rattling, cabin tearing itself apart/oh my god are we going to make it experience you get while landing in the rival Airbus A380.

Our very own Air New Zealand was the first airline in the world to take delivery of the 787-9, the second iteration of the Dreamliner, and now there’s even a 787-10.

Sounds amazing. What’s the drama then?

Well… Once we landed safely a large flap on the underside of the engine we were sat right next to was opened and workers seemed to start doing stuff to the engine (also disconcerting).

This was likely because the Rolls-Royce engines attached to the big Boeing have been wearing out a bit quicker than expected (gulp) and requiring maintenance sooner than expected too. This has caused delays and problems for airlines with Dreamliners around the globe, including of course, Air New Zealand who had to send two of its aircraft away for work.

It was reported earlier this week that about 9000 passengers would be affected by rescheduled or cancelled services while Air New Zealand sorts its Dreamliners, and the delays could go on for months.

Ermm, there’s also a tiny issue with corrosion on some engine blades which, along with the more regular maintenance checks, Rolls Royce estimates may cost it about $600 million.

So it’s all Rolls Royce’s fault then?

Pretty much, it’s British innit. But smarter people than me (engineer types) would likely say with any new technological advance or new bit of gear (like the Dreamliner or Rolls Royce’s Trent 1000 engines) there’s always going to be teething issues that need to be worked out and everything is totally fine!

Ok… But how come Boeing calls their plane a Dreamliner?

There’s a few things Boeing pegs as giving a more enjoyable long-haul experience on the Dreamliner. The 787’s cabin is pressurised to a new maximum level of 6,000 feet; 2,000 feet lower than most other aircraft. It says “altitude chamber tests show that because the body absorbs 8% more oxygen into the blood at this altitude, passengers experience fewer headaches and less dizziness and fatigue”.

So why don’t all planes just fly lower?

You can’t do fly lower in any old airplane. Boeing continues: In aluminium airplanes, pressurising a cabin at 6,000 feet would be weight-prohibitive and cause structural fatigue concerns. But the 787’s composite fuselage permits cabin pressurisation at this lower altitude with almost no weight impact. Basically, a 787 is not a tin can.

It’s also noticeably smoother through turbulence (if you ask me). This is because it has sensors to detect turbulence and adjust control surfaces, dampening movement and reducing motion sickness eightfold. EIGHTFOLD.

But not flying at all or having your flight rescheduled is not very dreamy is it?