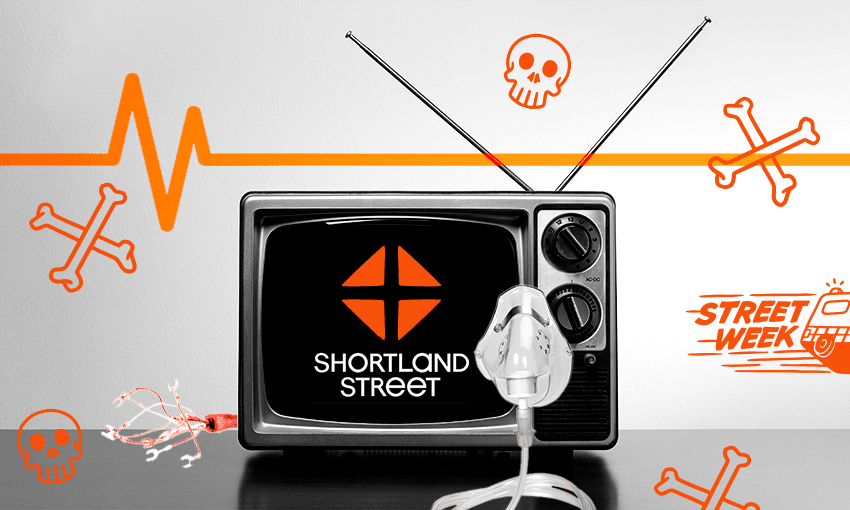 Shortland Street is a training ground for New Zealand’s film and TV industry. Many hope it stays that way. (Image: Getty/Archi Banal)

Shortland Street is a training ground for New Zealand’s film and TV industry. Many hope it stays that way. (Image: Getty/Archi Banal)

For three decades it’s been the cornerstone of our film and TV industry. But what if it wasn’t? Chris Schulz explores a hypothetical future with no Shortland Street.

It’s been the backbone, the springboard, the raison d’être of New Zealand’s film and television industry for the last 30 years. If Shortland Street was to cease production, those in the industry say, it would cause a tectonic shift that would take decades to subside.

“The reality of it is there are very few people working in the industry … who haven’t at some point done a stint on Shorties,” says Kelly Martin, the CEO of South Pacific Pictures, where the show is made. “It’s been the foundation for the industry.”

John Barnett takes it further. “Shortland Street has been the driver of a whole lot of the on-screen success that we’ve seen,” says the former head of South Pacific Pictures, who used to executive produce the show. “All that great TV [we made] over the past 25 years has been very much driven by the fact that people began and worked on the soap that played night after night.”

Shortland Street acts as a breeding ground for talent, says Barnett. The show forges careers. “It gives writers the chance to really hone their skills and become familiar with constructing storylines and cliffhangers,” Barnett says. Martin agrees, listing ongoing productions like Sweet Tooth and One Lane Bridge as big shows which employ a lot of ex-Shortland Street staff. “I think pretty much everything [made in New Zealand] … there’d be someone from Shortland Street.”

Barnett saw its influence in effect just last week while attending a screening for a new TVNZ show. “Nearly all of the people who were involved in the show at some time or another had been through Shortland Street,” he says. “You can’t find a film crew or a TV crew that doesn’t have Shortland Street alumni in it.”

It’s not just those in front of the camera. Up to 120 people head out to South Pacific Pictures’ West Auckland studios every day to shoot the quickfire soap, putting together an episode a day. It’s a bustling set full of art directors, sound engineers, and those in charge of wardrobe, make-up, lighting and scripts. Many looking to start their career in the industry get their break at Shortland Street.

Andrew Fabling is one of those. At 26, after bit parts helping out behind-the-scenes on ads and the film Millie Lies Low, he’s spent the past two months in his first full-time role on Shortland Street. All day he works as a studio assistant, moving walls around, dressing sets, and making all the food and drinks actors use during scenes.

After spending the majority of the past two years working in a supermarket, he’s loving his first “big league” job. “It was hard finding work,” he says, “so I couldn’t turn an opportunity like this down.” He sees it as a stepping stone to his dream job in the sound department. “I’m putting in the hard yards now and proving that I’m capable of doing things.”

Could the unthinkable happen? Shortland Street’s ratings aren’t what they used to be – 215,000 people tuned in each night during the first week in May. That’s well down from its 1995 peak, when 700,000 viewers tuned in to watch Tiffany and Carla face off in a final showdown, or in 2010, when the soap’s first 90-minute episode saw an average of 344,000 viewers tuning in for the dramatic exit of Kieran Mitchell (played by Adam Rickitt).

These days, Three’s opposition The Project occasionally beats it in the ratings. While Shortland Street is often among the most popular shows on TVNZ’s streaming platform, soaps around the world appear to be struggling. When you look at what happened to Neighbours in Australia recently, Shorty’s future doesn’t appear as certain as it once was.

But Barnett believes Shortland Street is too big – and too important – to fail. He says Neighbours stopped answering the question, “How do we hold our audience?” Shortland Street does this by tackling topical issues and embracing radical ideas. “They’re constantly across that,” he says. “I think it’s got a very good life [ahead of it] … I think it’s very important that it continues.”

Showrunner Oliver Driver also believes that’s the key. “It’s very rare that the network would say to us, ‘Oh, that feels a bit much’,” he recently told Duncan Greive on podcast The Fold. “We’re encouraged to be forthright and to challenge people and to put characters and situations and stories and families that reflect a New Zealand, not only that exists, but that is beginning to exist.”

Barnett says this is even more important than Shortland Street’s role as a training ground. He believes it’s led the way in seeing more Māori, Pasifika and Asian talent on screen. “This is a format that allows our stories, our faces, and our places to be seen every night,” he says. “That gives us the confidence [that] our stories and faces are valid.”

Martin isn’t planning on Shortland Street going anywhere. In fact, at South Pacific Pictures they’ve even discussed what the soap might look like 30 years from now. “One of the things we want to focus on is not 30 years back, but, what’s the future of it? How does it stay relevant? How does it stay important? How do we take the show into the future?