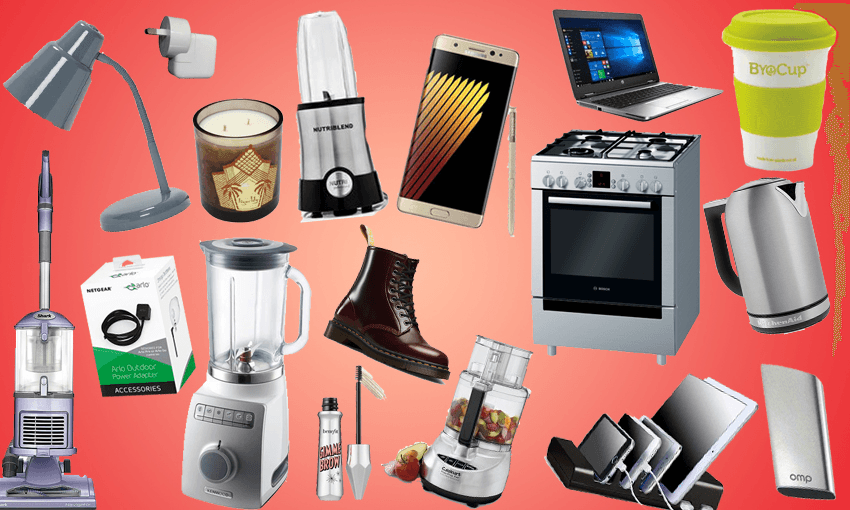 A random selection of items recalled over the last few years (Photos: recalls.govt.nz)

The great Spinoff recall list: How many of these common household items do you have?

A random selection of items recalled over the last few years (Photos: recalls.govt.nz)

From kettles and candles to laptops and lamps, hundreds of common household items have been recalled over the last few years. But chances are, you never even knew about it. In part one of The Spinoff’s great recall list, we look at various items in the heating, small appliance, electronics and homeware categories.

Earlier this year, the government issued just its second compulsory recall ever. That was a big deal because despite a voluntary recall for Takata airbags floating around since 2013, the government – taking a page from the Aussies – decided to step in after realising the recall was progressing far too slowly, with less than a quarter of those affected in New Zealand replaced since 2013.

That kind of success rate, however, is surprisingly all too common for voluntary recalls. Consumer NZ estimates that “less than half” of product recalls actually work, and while it’s normally better for items where customers details are noted down (like cars), common household items that are cheap and easily replaceable (like indoor electric heaters) can remain in use months – even years – after a recall is issued.

Below is a selection of recalled items we think are most relevant to consumers (part two looks at items specifically targeted at babies and children). Of course, it goes without saying that this is by no means an exhaustive list – for that you need to be looking at the government’s official website.

Read More: How many of these are your kids still using?

Luckily, very few recalls have been issued for electric blankets and hot water bottles in the last few years, not that it stops hundreds from injuring themselves using the latter anyway. According to the ACC, 631 claims were made in 2017 by people who received burns from hot water bottles.

The most commonly recalled small appliance is the humble kettle with five issued in the last two years. Blenders have had three issued since 2013, with one of these being late night infomercial staple, the Nutriblend. Vacuum cleaner brand Shark also featured twice with its Rocket and Navigator Lift-Away models recalled back in 2015.

Hopefully, you already know if your washing machine is trying to kill you since most whiteware dealers note down customer details for warranty purposes. But considering Samsung’s recalled washing machines in 2013 were found to be still causing fires in 2016, it’s clear that getting faulty products out of people’s homes is no easy feat.

Stoves (electric and gas) seem to be the most problematic, with a total of five recalls issued in the last four years.

This includes tables, chairs, cabinets, lamps, candles, clocks and lighting fixtures. Various kitchen tools like vegetable spiral cutters are also included which, if you bought one from Kmart between 2015 and 2016, might actually end up trying to lacerate you. Lamps and chairs feature the most with four recalls each since 2015.

Brace yourselves – this is a big one. According to the Ministry of Business, Innovation and Employment (MBIE), the third most commonly recalled household product in the last three years were adaptors, chargers and power suppliers. In fact, at least 27 recalls have been made since 2014 for items such as plugs, cords, power banks and power boards (this excludes items specifically designed for laptops, tablets and smartphones).

Other than the Volkswagen ‘cheating-emissions-test’ recall of 2016, Samsung’s ‘exploding-phone-on-plane’ recall issued the same year might just be one of the most well-known in recent times. But it’s laptop batteries that seem to be posing more of a problem, with at least eight relevant recalls issued in the last five years. Recalls for batteries in Toshiba and HP/Compaq batteries in 2016 and 2017 were even expanded with new models added.

From carcinogenic jeans to leaky bottles of bleach, there’s a little something for everyone.

The Great Spinoff Recall list: How many of these are your kids still using?

There have been 22 heater recalls since 2010, and there’s a decent chance yours is on the list