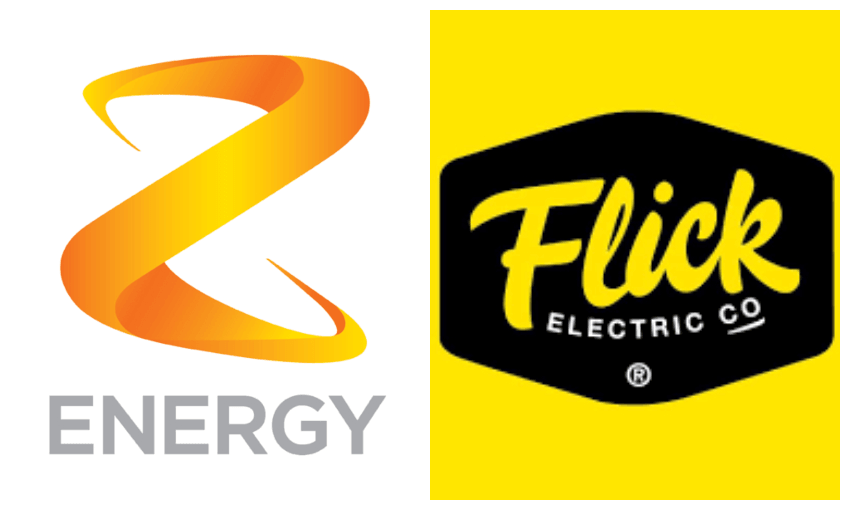 Z Energy sells more petrol than anyone else in New Zealand while also trumpeting its environmental record. Today it put its money where its PR is in purchasing a large majority stake in Wellington startup Flick Electric Co.

An unlikely marriage – more an adoption, really – has just been announced between Z Energy and Flick Electric Co, with Z buying a 70.1% stake in Flick for $46m. The transaction sees Z, New Zealand’s biggest petrol retailer, moving into the electricity sector, one dominated by vertically-integrated so-called ‘gentailers’ like Meridian, Mercury and Genesis. These businesses both generate electricity and retail it to consumers; many are also majority owned by the government, meaning they are considered to be amongst New Zealand’s most entrenched business opponents.

It’s also notable in that Z’s main product is fossil fuels, while Flick has staked its future on allowing consumers to opt out of heavily polluting forms of electricity. In an interview with The Spinoff, Z CEO Mike Bennetts said that, far from a disadvantage, the carbon-intensity mismatch was a big part of what made the transaction attractive.

While many businesses are making noises about cleaning up the environmental impact of their core business, Z is a paradox in being both as dirty as they come in its core product, yet apparently deeply committed to change. “We have a purpose: we’re fundamentally here to solve what matters for a moving world,” he told me in an interview last year, tellingly conducted as part of their support of An Inconvenient Sequel. “Not flog off more carbon.”

Indeed, Bennetts’ contention is that the climate science is irrefutable, which means a business like his must transition to a post-petrol world to survive. And that unlike other petrol retailers, Z is not the oil equivalent of a gentailer – they own no reserves, and buy all their oil on the market. To avoid being stranded with a transport fuel for which demand should fall in time, he wants to diversify the business to focus on three elements of a business evolution strategy they call ‘what’s next?’ These are future fuels, mobility and the last mile. Flick allows Z to participate in the swing toward EVs, while also wedding the company’s tech and startup ethos to the scale and operational efficiency of Z.

For Flick this represents the opportunity to join a far larger entity and leverage some of their strengths in a market dominated by long-established giants – five of which have customer bases more than 10 times the size of Flick’s 25,000. Flick CEO Steve O’Connor characterises Flick’s history to this point as being largely experimental – from here the company plans to leverage what it has built and learned into the kind of real scale necessary to compete against the tactics of the major power companies.

“We believe a lot of the incumbents are holding higher prices for disengaged customers,” he says. “I don’t know whether they’re anticompetitive or not – but they’re certainly not pricing favourably for all consumers.”

He’s talking about the longstanding practice of offering heavy discounts and incentives to switch power companies, which typically expire after a year, at which point rates rise. Flick’s model ties your electricity payment to the spot price of electricity, delivered live and in real-time to its customers, who are theoretically able to, say, run their dishwasher after a price spike passes.

Flick has endured a hard couple of years, characterised by the highs of doubling its customer base and winning multiple awards for its customer-centric approach, while also enduring major and lengthy spikes in spot prices which have seen customers stung with higher bills than they had anticipated at times.

Both businesses share some critical cultural values, “a very strong commitment to diversity, inclusiveness and values,” says Bennetts, while O’Connor notes that Z is counterintuitively rated amongst New Zealand’s 10 most sustainable companies.

The acquisition also gives Z shareholders the ability to participate in some of Flick’s potential upside. Flick’s O’Connor says that its tech is “unique globally in many respects”, and it retains the ambition to either sell it as a platform or enter other similar markets as a brand. Both parties also mention solar energy, battery storage, the rise of electric vehicles and home automation as areas which fall between the ambitions of each.

In the broader New Zealand context this kind of horizontal acquisition is pleasing to see in a marketplace which is used to seeing acquisitions within industries, but not necessarily between them. Whether Z can actually build Flick to a scale in which it can truly compete with the big five gentailers remains to be seen – they are amongst our most valuable companies for a reason – but the ambition and commitment to move beyond astroturfing into an actual investment is an interesting development in a corporate sector which can be very risk-averse.

Disclaimer: Flick remains a client of The Spinoff – but this piece was commissioned and written independently of that relationship.