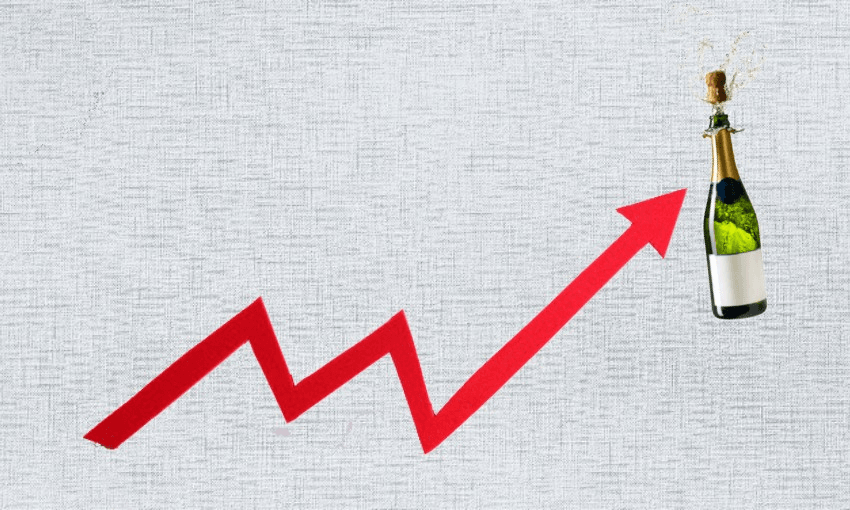 NZ is leading the global pack on GDP. Is it worth breaking out the bubbles over?

New Zealand’s economy has actually grown during the pandemic, joining a small club of countries that are back in the black. George Driver investigates whether it’s time to celebrate.

The country’s latest GDP figures seemed to be received with a collective shrug. New Zealand had “avoided a second pandemic recession” and the economy had been “kept afloat”. Before the figures were even released, the usually upbeat Mike Hosking erroneously announced they would “expose our stagnant economy”. The Spinoff’s own Alex Braae declared they were “probably not the sort of numbers you’d pop champagne over”.  Media coverage soon turned to the perennial news story of the housing market and how the rise in GDP might result in an interest rate hike.

But don’t put the Lindauer back in the pantry just yet. Look at the economies around the world and our economic performance begins to look cork-poppingly good.

New Zealand has now joined a small club of countries whose economies are now actually larger than they were before the global pandemic.

In early June, figures for the March quarter showed GDP – a measure of the size of the economy – grew 1.6% compared to the previous quarter, defying predictions of negative growth. After a turbulent 12 months, when economic growth swung from a record 12.2% fall after lockdown to a record 14% rebound in the September quarter, for the first time the economy is now larger than it was before the pandemic. GDP is now 0.8% higher than in the three months to December 2019. That might not sound like much, but it is the kind of figure other countries can only dream of.

According to OECD figures, the economy of the European Union declined 4.6% over that period, with the UK’s economy shrinking 8.7% compared to pre-pandemic levels. On average, the OECD economies shrank by 2.3%. North America has fared slightly better, the US economy shrinking 0.9% and Canada by 1.7%.

Only a handful of other countries have grown since December 2019. These include China (7.1%), Turkey (6.8%) and India (2.7%), although the latter figures come with asterixis – inflation in Turkey was over 16% and the economy is said to have shrunk 40% in US dollar terms since 2013, while India has been hit by a crippling Covid-19 outbreak since March.

More comparable countries in the growth club include Korea (0.6%), whose GDP grew on the back of an export boom led by computer chips and vehicles, and Australia, which has matched New Zealand’s growth of 0.8% by also mostly keeping Covid-19 at bay.

Comparing GDP figures for the year to March 2021 – which factor in the economic turbulence of 2020 – with the pre-pandemic year to December 2019, New Zealand’s economy is actually a nose in front of Australia’s, defying Hosking’s repeated claim that Australia is doing better than us in handling the economic fallout of the pandemic (see here, here and here). Over this period, New Zealand’s economy shrank 2.3%, while Australia’s contracted by 2.4%.

Infometrics senior economist and boy wonder Brad Olsen says all this means New Zealand has a head start in the post-pandemic recovery, while demonstrating the strength of our economy.

“New Zealand’s economic performance since Covid-19 has been impressive, and stronger than most economists were expecting, underscoring the resilience of the New Zealand economy and backing New Zealand’s immediate response to Covid-19,” Olsen says.

He says New Zealand’s low unemployment rate – 4.7% compared to the OECD average of 6.5% and 5.1% in Australia – also puts the country in a strong position post-Covid.

“Having more people out of work and then back into work could limit the speed of recovery in some areas, with retraining needed for some groups. Whereas in New Zealand, job losses were more muted, meaning less disruption and stop-start of jobs and work.”

Olsen says the government can take credit for the country’s relatively rosy economic performance, with the wage subsidy and lockdown paying off in the long run.

He says the figures also help to settle one of the biggest local debates of 2020: whether New Zealand should have followed Sweden and avoided a lockdown to save the economy. According to the OECD figures, Sweden’s economy has shrunk by around 1% since December 2019, while recording 14,570 deaths.

So, does that mean we can celebrate? Not so fast, says University of Otago senior economics lecturer Dr Murat Ungor. While the country has done well during the pandemic, addressing long-term structural issues in the economy will be crucial in the long run.

“What really matters is what happens long-term,” Ungor says. “Quarterly data is only showing us short-term fluctuations – in 10 years’ time no one will remember what the growth rate was in March 2021. It’s only by addressing the structural issues in the economy that we will see sustained growth.”

In particular, Ungor says New Zealand needs to address its woeful productivity to ensure growth continues. A recent report by the Productivity Commission found New Zealand was one of the least productive nations in the OECD.

“Without fixing this we will have serious economic problems in the next decade.”

So what’s the verdict on the GDP news? Maybe not champagne worthy, but arguably at least worth a bottle of reasonably priced New Zealand sparkling white.