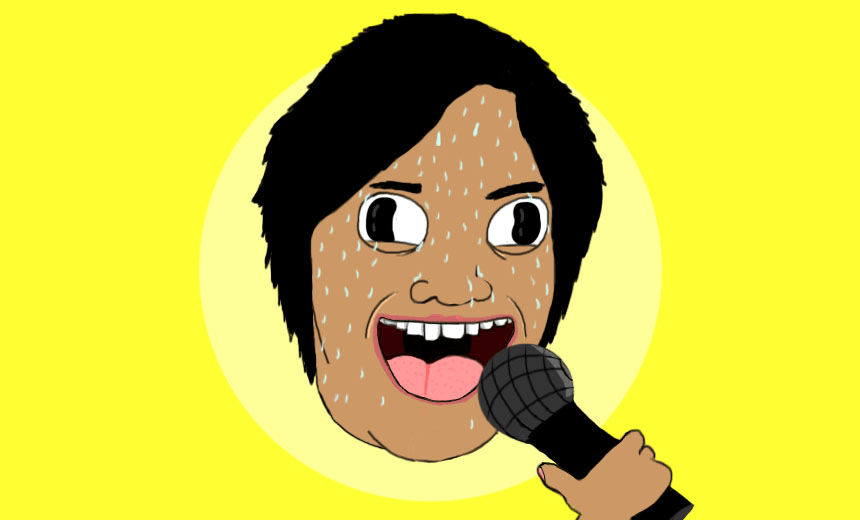 I did stand-up comedy and nobody died: a comedy virgin makes his stand-up debut

Spinoff Comedy co-editor Sam Brooks had never done stand-up before last night. This is his story of how he told jokes on stage at the Classic’s Raw Comedy night – and lived to tell the tale.

But I thought we should cover Raw Comedy for the comedy section. It’s where so many of the people you love got their start. I remember seeing Alice Snedden’s first Raw gig, where she absolutely bloody killed it, and I’ve seen some of the most exciting comedians of today do Raw Comedy gigs, as well as the inevitable train wrecks.

The problem was, while I have no desire to do stand-up (I also have a stutter and also I sweat a lot under lights), I have even less desire to try and find someone doing a Raw gig, hoping they’re a good enough writer to cover the experience in an engaging and compelling way, and then editing whatever they write into something even more engaging and compelling. So I decided to do it myself.

In some ways, I’m the ideal person to do this kind of gig. I’m kind of funny, I have some experience performing, I have too much experience writing, and I don’t get nervous.

In other ways, I’m the least ideal person. I have a stutter, which is a speech impediment, which is literally something impeding my speech, the primary tool you use to communicate in the artform of stand-up comedy. I also have no real desire to be liked and therefore no desire to get a room of mostly strangers on my side.

So there’s the set-up.

I emailed Scott, the gregarious Santa-like steward of the Classic, and asked for a slot at Raw Comedy. He gave me a slot for last night, April 3rd, and I proceeded to not do anything for three weeks. Sometime last week I decided I should probably write something, so I asked an unnamed comedian friend to listen to me do stand-up and tell me where I wasn’t funny. He did this!

I got to the Classic an hour early because I’m also that kind of person. I still wasn’t nervous, for some reason. I found myself thinking, “It’s five minutes. I’ve had sentences that last longer than that. I’m good.” Also I rationalised my lack of nerves by thinking that people were paying $5, so they get the level of comedy they pay for. (I often rationalise things to myself by denigrating other people’s life choices.)

I scoped out the place, and wondered who are the kinds of people who go to Raw Comedy. Why aren’t they at home watching The Bachelor? Why are they outside at all? What in them drives them to see raw comedy? Do they want to see a train wreck? Or do they have some kind of bizarre Michelle Pfeiffer-in-Dangerous–Minds-like desire to get on the ground floor of a talent and see them grow?

I did my orientation, only to find out that most people who worked at the Classic had assumed I’d done it before. I have no idea why this might be the case. I hang around comedians a lot because theatre and comedy overlaps like bacon and egg, but where the bread is consistent poverty. Other than theatre stuff and some lip-sync spots at Dope Joke Party, I’ve never done anything that I would consider even stand-up adjacent. Still, I wasn’t nervous.

I wasn’t even nervous when the two people I had instructed and pleaded with to show up actually showed up, even though one had a lot of work the following day and the other one was sick. That is, until two other friends who had decided to come along on a whim, not even for me (which is rude), also showed up. That made the nerves set in just a little bit, but still, I wasn’t experiencing the legendary nerves that everybody associates with stand-up comedy.

During the orientation, I was told or advised to network and meet the other comedians. I did not do this. One of my very good friends, playwright/storyteller/Doctor Who fan Uther Dean, was also performing that night and I spent most of the time catching up with him and distracting him from his game of Pokemon Go. I wondered if he was nervous. A lot of the other people were visibly nervous, or visibly trying to hide their nerves. Contrary to what you might assume about comedy greenrooms, it was a warm, if heightened, and supportive vibe. If I had reached out or talked to anybody it would’ve been all good. But I didn’t! Because I know enough people, you guys.

Something sat weirdly in my body when the first act on the bill, a practiced and enthusiastic girl called Megan, closed her set with a foreskin joke. ALL MY MATERIAL IS FORESKIN RELATED. I’d gone into this night thinking quite confidently that nobody else would be making foreskin jokes.

How wrong was I. I was even more mortified when the MC, the lovely degree-wielding dudebro Matt Stellingwerf, riffed on this girl’s foreskin joke in between sets. That was my material! I had written foreskin stuff! I had rehearsed foreskin stuff! It was fine. Maybe I could just rely on the audience’s tolerance for foreskin stuff being lowered and I could go in grosser and harder. It’d be fine.

But for some reason, maybe fate, maybe karma, I was last on the bill. The rest of the acts passed in kind of a blur, I remember there was an opera singer, I remember there was a dude who opened his set with ‘retard’ and then used any number of words to refer to women without actually calling them ‘women’, I remember the girl before me being incredibly and visibly nervous but who killed it anyway.

And then it happened. I completely went up. (Going up is an industry term for forgetting your lines entirely, I assume it refers to wanting to go directly to heaven because that’s what it feels like.)

Now, there’s a certain thing that happens with my specific speech impediment that it’s incredibly crucial to note here. It takes focus to stay fluent, to modulate speech patterns to dodge around my stutter or to work through it. It also takes focus to remember what you’re going to say, when you’ve planned a five minute set with very specific phrasings and punchlines.

When you’re onstage and you’re in that moment and there’s silence in the room, you go with fluency. I dropped my material entirely, other than that it was vaguely based around foreskin and linking it with my speech impediment, and just started to riff. The audience enjoyed it.

Then I hit a roadblock with my speech. (People in the speech therapy industry call this, appropriately, a ‘block’.) Someone said ‘spit it out’. Now, I’ve had this thrown at me all my life. It rolls off me like water off a particularly wet duck’s back. But I had a platform now! I had a microphone. There were lights on me! People were generally on my side after I had asked if a woman up the front had ever sucked a dick. I went for it:

Then I made jokes about her workplace, and returned to a place that was somewhere left of the punchline I had planned. I bowed, hopefully well ahead of my time (there’s a red light that I assumed would be my worst enemy but that I never actually looked at once) and left the stage.

I felt elation for a few moments afterwards. People had laughed. People had laughed at some stuff I’d planned, and at some stuff I really hadn’t. A mixture of industry people and strangers said I did good as I left the venue rather quickly, mostly because I was tired and hungry rather than any desire to not speak to anybody. My best friend said he’d heard enough of me talking about penises to last him a lifetime.

Having done it once, in an unpaid gig for what was probably like three minutes, I got why people do stand-up. For however long you’re onstage, you have the undivided attention of a group of strangers. There’s a very clear ‘you are doing good!’ response, which is laughter. You have power to say whatever you want and they have to listen. And if you fuck up, nobody dies.

Honestly, why wouldn’t you try stand-up?*