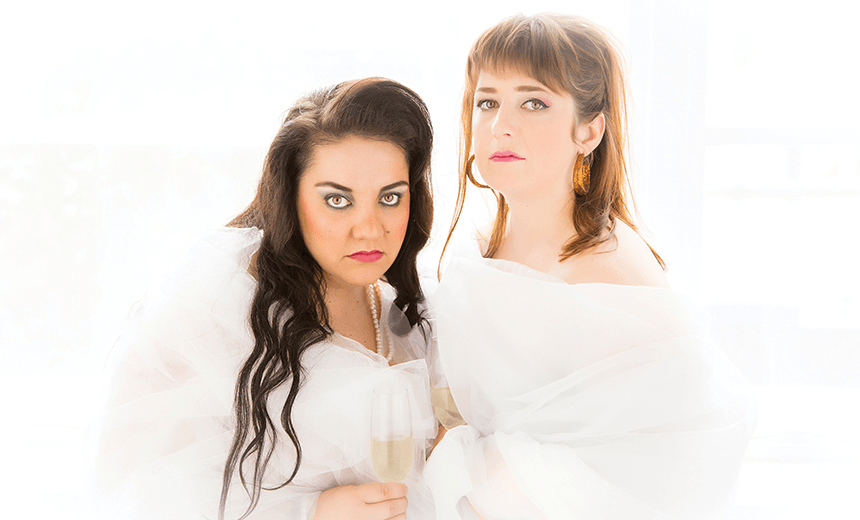 Natasha Hoyland sits down with The Fan Brigade – Amanda Kennedy and Livi Mitchell – to talk about songwriting, Mike McRoberts and toilet sex.

How did you guys meet? I heard you met on Twitter, is that right?

Amanda Kennedy: Yeah, that’s right! We randomly followed each other and then I was brave and DM’d Livi.

Livi Mitchell: She slid into my DMs.

Amanda: I was just like, “you’re fucking funny and I heard about this Raw Quest thing and you should enter it!” and Livi was like–

Livi: “No, you’re funny, you’re the funniest, you should do it.”

Amanda: So a bit of back and forth like that and then we became friends and hung out one night. That was the first time we met and we wrote our first song that night, then two weeks later we performed it on stage. It was all really sudden and fun.

Was that the one about Tamati Coffey?

Livi: Yeah, we wrote that the night we met! We did it in the Raw Quest, and the second time we had ever been on stage was the semi finals. From there we just kind of kept writing and just hanging out and loving it.

Where did the idea for that song come from? How did you guys mutually decide on that?

Livi: From an incredible brainstorm that we had. We drew a physical brainstorm on some paper, and in the middle was a circle that just said ‘funny shit’. We sat there for like an hour.

Amanda: We just started talking, because we didn’t really know each other and were trying to get to know each other, and one of us was like, “Tamati Coffey is the biggest babe” and we both agreed on that.

Livi: And we thought, “Yup let’s write a song about this” and it just came very easily.

Were there other ideas that you brainstormed that night that you trashed or put aside for later?

Livi: No, I was going to say that we did a parody the first time we met too.

Amanda: Yes, of ‘My Favourite Things’ from The Sound of Music. It was terrible.

Livi: It was awful.

Amanda: There was another one, what was it, when someone sits near you or something?

Livi: ‘When Someone Sits Too Close To You’. And another one we tried to write was about inorganic rubbish collection, this wasn’t the first night by the way, this is just bad ideas we’ve had since then.

Amanda: We also wrote a song about blackheads, how when someone squeezes your blackheads, they actually love you.

Livi: And there’s a reason you’ve never heard any of these, Natasha.

I wish I had, because they sound great!

Amanda: We did each of them once and once only.

Amanda: Yeah, we tried them out.

Livi: A couple of them we’ve written and never tried out, like ‘Inorganic Rubbish Collection’.

Amanda: Once Livi did one about…

Livi: Shut up, that was yours! Amanda did one about how it’s a digital world, but she was talking about your fingers instead of technology. She was like “what if you have no thumb? How do you hitchhike?”

(they both laugh hysterically for a few minutes)

Amanda: It was Livi’s idea.

Livi: Oh god. For me I think probably the ‘Toilet Sex‘ one at the moment. I think because it’s fun to perform.

I was really stressed out by your hair in the urinal.

Livi: Oh yeah! I think everyone got stressed out by that. Everyone was like “AMANDA NO!” to when she puts her finger in the urinal and “AMANDA NO!” with her hands in it, and “OH NO! LIVI WHAT HAVE YOU DONE?” when I put my hair in.

Amanda: Scott Blanks, the owner of The Classic where the video was filmed, said he had vomit in his mouth watching it because he was in there with a paint scraper when he first got The Classic. I’m also really enjoying a new song that we wrote about our exes.

Amanda: Just because it’s really cathartic for us to sing.

Livi: And really different for us.

(very loud gasps of laughter from the both of them)

So you wrote a song about him, is that right?

Livi: We sure did.

Can you tell me about that?

Amanda: About fingerfucking yourself to the news because Mike McRoberts is on.

Livi: I mean, that’s just the first two lines, but you can kind of see where it goes from there.

Livi: He’s so lovely. And we’re really excited because he’s coming to our show! How am I gonna stand there and perform this to him!?

Amanda: Someone suggested we bring him up on stage for it but I just about had a full on panic attack thinking about it.

Livi: We talked to someone who kind of knows him a bit and they said he’s got quite a good sense of humour, so I hope so. But if you want to know anymore about it, you’re gonna have to see the show!

Are you seeing anything else in the festival?

Amanda: Yessss, as many things as possible.

Amanda: Sera Devcich and Savanna Calton, they are so funny.

Livi: Actually Ismo would be my number one. Don’t tell Lana and James, they’re a very close second, but Ismo is a God.

Great! Well, that’s all the questions I have for you!

Livi: Oh good, you don’t have any about what it’s like to be a woman in comedy.

Because I hate those questions!

Amanda: Can you ask us?

Livi: Can you just ask us that? We’re so used to being asked that, it’s weird if you don’t now.

Okay… what’s it like to be a female comedian?

Livi: Fuck, really? Do you know what the most annoying thing about being a woman in comedy is?

Livi/Amanda/Natasha: BEING ASKED THAT QUESTION!