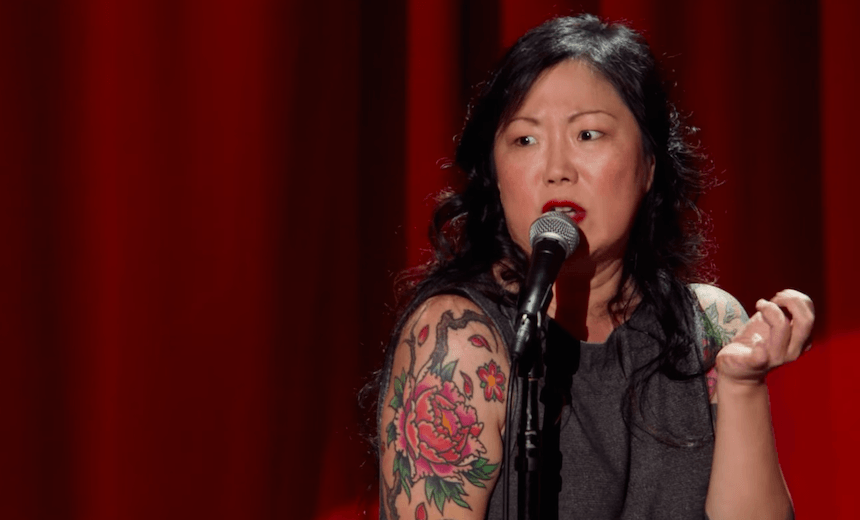 Sam Brooks has watched a lot of stand-up comedy specials in his 26 years on this planet. These are his five favourites.

First things first: yes, my five most beloved comedy specials are all by women. That’s not because it’s two days after International Women’s Day but because I always have and always will believe that women are funnier than men.

Margaret Cho: I’m the One That I Want

I’ve been straight-up idolising Margaret Cho since I was about ten years old, which explains a lot about 26 year old me. For me, she is the dream comedian. Her jokes are dark and angry and while they’re aimed at a specific audience (gay men), they’re also universally funny.

She’s an immensely committed performer, going full bore with her voice and her face. There’s a reason her impression of her heavily-accented mother is equal parts popular and controversial; she doesn’t hold back one bit.

For a special that is now 17 years old, Cho couldn’t be more relevant, tackling racism, weight and sexism with an unapologetic rapid-fire pace and machine-gun spread. If you’re an oppressor, or just a bad person, Cho opens fire on you.

And, as in the best comedy, Cho goes deep into her own pain and struggles and finds the darkest, and of course, the funniest stuff there. She talks about her sitcom being cancelled after one tumultuous season, through which she struggled with network demands about her weight and how ‘Asian’ she was, only to be replaced by Drew Carey’s show.

Mo’Nique: I Coulda Been Your Cellmate

You’re probably a lot more familiar with Mo’Nique from her TV-throwing, Oscar-winning turn in Precious, and potentially from her problematic-but-fiercely-feminist stint hosting Flavor of Love: Charm School, than you are from her stand-up. I Coulda Been Your Cellmate is a sneaky little documentary of a stand-up special that is as confrontational as it is funny.

The concept is fairly simple. Mo’Nique visits a women’s prison in Nowheresville, America, gets to know the inmates and the following day does an hour of comedy for them. We see some of her conversations with these inmates – handled worse, they would exploitative and hamfisted, but Mo’Nique brings her huge heart and deep empathy for these women to these segments. If you saw her on Flavor of Love: Charm School, you know that nobody is as genuine as Mo’Nique. She does not half-step her empathy.

The hour of comedy is not the funniest or the tightest I’ve ever seen – it’s very clear at points that she wrote it overnight. But her rapport with the audience has a generosity that outweighs anything I’ve ever seen in this format. She is constantly reminding the audience, both inmates and us watching at home, that these women are human. After her punchlines, she throws in the reminder: “I coulda been your motherf**king cellmate.”

At its best, comedy unites people and reminds us that we’re all human. When you laugh at a joke, you’re laughing with somebody who has a completely different set of life experiences than you, but those words in that order triggered that laugh in you. For that reason, I Coulda Been Your Cellmate is comedy at its best.

Maria Bamford does a joke about Paula Deen’s (hypothetical) suicide note. She tackles stigma against mental illness and suicidal ideation with as much fire and precision as she describes the difficulty of going on holiday with her family.

Speaking of that family, this special is unique in form in that she’s performing it for an audience of two people: her parents. She’s also doing it in her own living room. It makes for a strangely intimate experience that eschews any awkwardness you might expect. If you were the kid who did plays for your parents in your living room, you’ll be able to empathise with Bamford.

If you’ve seen her surreal Netflix comedy Lady Dynamite, then you know Maria Bamford. And if you haven’t, then you should probably go do that, but also think of Bamford like your weirdly dark and morose kindergarten teacher, albeit one that talks about how she may have accidentally killed one of her pugs that one time.

As with Mo’Nique, you’re probably a lot more familiar with Whoopi Goldberg from her you-in-danger-girl Oscar-winning role in Ghost or, if you’re a teenager who had access to Vibe in the 00’s and too much time on his hands, as a host on The View. Also, it’s Whoopi Goldberg. She’s been a thing since most of us have been alive – we know who she is without necessarily being familiar with her work. (Pro-tip: She is truly excellent in The Colour Purple, and you should probably watch that too.)

What Goldberg gives us in Direct from Broadway is stand-up at its most character driven (if you’ve seen any drama school student’s solo show, you’ve seen this done before and probably poorly). She plays five completely different characters, from a Valley girl to a junkie named Fontaine; each is deeply lived in and showcases Goldberg’s skills as a performer. Her physicality and her presence is similar to Bjork’s: it sits on the borderline of raw and composed, so much so than it seems more superhuman than human.

This isn’t your classic set-up-joke-punchline kind of comedy; this is comedy that draws you into a character and gets you laughing with them and all their specificities and quirks. We don’t get a lot of it, probably because it’s pretty hard to market and even harder to do well. And why do you need more of it when you’ve got Goldberg’s shining example right here?

Wanda Sykes: Imma Be Me

The other specials on this list are there because they stand out in some way: they’re a comedian at the peak of her career at her most crafted and most painful (I’m the One That I Want), or doing something special for an audience and a demographic we never think about (I Coulda Been Your Cellmate), or inviting us into her home for an intensely private hour of jokes (The Special Special Special), or a virtuoso performer doing what countless drama school students have tried to do since, but better than anybody else on the planet (Whoopi Goldberg Direct from Broadway).

Imma Be Me is an hour of excellent jokes, some biting, some observational, some politic, delivered by a performer who knows exactly what she’s doing. If my first picks represent four loosely defined points on the comedy star, Imma Be Me is the centre of all four. I’ve seen all these specials more times than I count, but Imma Be Me is the one that I return to when I’m hanging up laundry or cooking. It’s a warm hug. And sometimes that’s what you need from your comedy. Sometimes what you need is Wanda Sykes doing an impersonation of Michelle Obama.

There are only so many ways you can say ‘this person is funny, please watch them’.