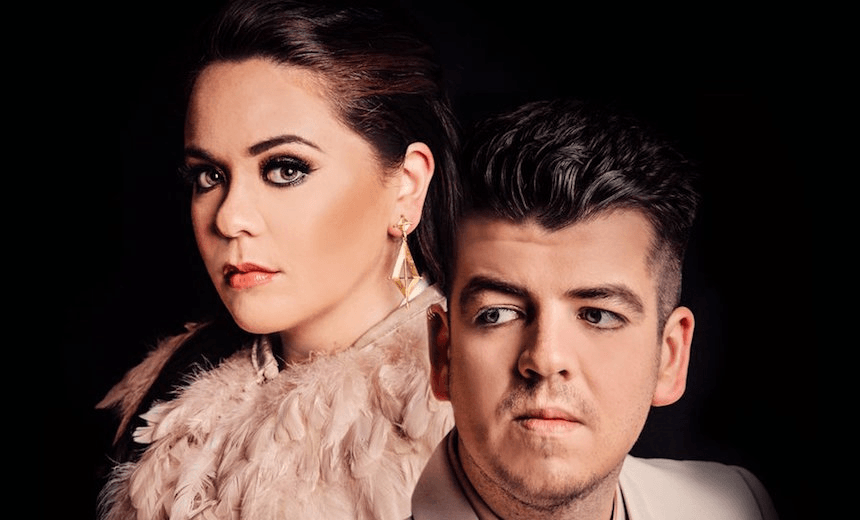 The line between perfect pop and its parody is incredibly thin. Joseph Moore, one half of Two Hearts, the fake band currently playing Q Theatre, knows this well enough to argue persuasively in favour of the apparently serious Chainsmokers, a band he ably also dissects during Two Hearts, his and Laura Daniel’s exquisitely rendered blend of love letter to and parody of pop music circa 2017.

Musical comedy is no new thing, and practising it to an able but not exceptional level seems relatively easy – a few chords, a plausible voice and some self-deprecating jokes and you’re basically there. What elevates ‘Two Hearts’ is the extent to which Moore and Daniel have worked on and authentically absorbed the current ecosystem of popular music. The scale of the production was what elevated it to something beyond what I’ve seen from our local comedy – or much of our local music. It was legitimately enjoyable on either front, but in combination it was exceptional.

Last year’s comedy festival, perhaps in the wake of Rose Matafeo’s excellent Finally Dead from 2015, witnessed a group swing toward more produced shows, a number of which felt somewhat slight underneath the flashing lights. This year has seen something of a move back to writing, to a performer and a mic. That Two Hearts runs so hard against the grain is pleasing.

The show is functionally a pretty convincing attempt at an arena pop show, one which despite its 100-odd strong audience has a level of production on par with the average Logan Campbell Centre artist. The dancers are legit, the video is legit, the live audio production work is very legit. Actually, scratch what I said about the dancers – one is an ex-Shortland Street star and has the best, most perfectly-sculpted body I’ve ever seen in the flesh.

But he’s not the only one working it right. It’s a slick, very rehearsed and well-choreographed experience. I’ve seen numerous pop artists perform under constrained circumstances – shows stripped back due to the headliner’s whims or the difficulties moving a show at scale to a smaller venue in a tiny country. Two Hearts rarely felt like it wanted for anything. Instead it was straining at its leash, always trying to go bigger.

The concept – a pop duo with a terrible interpersonal dynamic – can definitely stand further development. The pair’s affection for and adaptability to the medium is manifest throughout. Moore is a gifted audio production mimic, creating convincing soundalikes of Taylor Swift and Travis Scott, while Daniel is visibly swelling as a performer, playing a haughty, charismatic star barely tolerating her lovesick sidekick.

What is so exhilarating about the show is that if I had to pick its primary medium, I’d go for music. The comedy is light and precise and present throughout, but always carried by the execution of the songs, many of which are almost distractingly well-composed and -performed.

You can almost sense them leaving prior performer crutches behind, with Moore making fun of the wokesplaining he’s leaned on, sometimes wearyingly, in the past.

If nothing else the pair have given everything to this show, and in a country which creates so much pop culture which feels restrained through lack of effort or fear of failure, that alone marks it as something impressive and rare.

Cumulatively the show carries enough weight across the many disciplines it traverses that it raises a fundamental question of both performers: are Daniel and Moore still comic writers and performers collaborating on a pop music show – or have they actually just found their core medium?

Verdict: Daniel and Moore went all in and it really paid off.