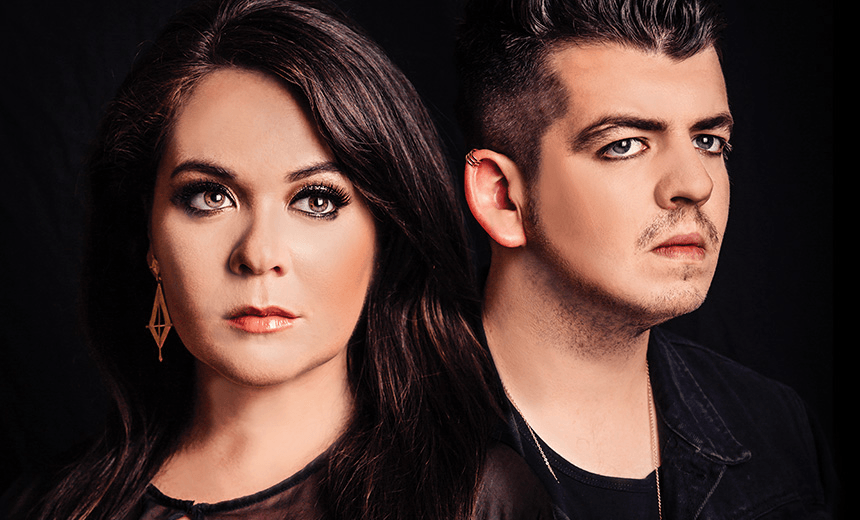 We’re halfway through the festival, I’ve seen about twenty-five shows, and I’m going to call it: Two Hearts is the show of the 2017 NZ International Comedy Festival. Hell, it might even be the show of the year of any genre.

Two Hearts is the new comedy duo, formed of Jono and Ben and Funny Girls alums Joseph Moore and Laura Daniel, and their show is a pop concert, the kind that should be at Vector Arena but fits more than comfortably in the Q Loft. It’s got full lights, full sound, full choreography, and even a huge scaffolding set.

Musical comedy is a fruitful place for NZ comedians to rest, it’s not necessarily that it’s easier than stand-up, but it’s an easy way into an audience’s sympathies and good books, especially if it’s done well. The lo-fi nature of much of the musical comedy in NZ comedy also lends it well to these things; it’s people sitting on stage having a laugh with their friends and an acoustic guitar.

Two Hearts is not lo-fi. Two Hearts is pop at its most shamelessly hedonistic. There’s a Beyonce wind machine, you guys! If you took someone to Two Hearts as a concert, they would not walk away disappointed. The music is on-point, and some of it should be on the radio (or at very least on Spotify), but more than that? It’s hilarious.

Even more hilarious, and winning, is the chemistry between Daniel and Moore, who are clearly having a ball ripping into each other onstage, and even more of a ball performing these songs. I’ve seen these guys perform for a few years now, separately, and their stand-up is great, but seeing them onstage together is something special. The fun they have is infectious.

Not only does this show give us two of our young comedians taking huge leaps and strides upwards in their form, it gives us an excellent show on top of that. There are shows where you can feel it was written the week before or shows that are put on because the comedian feels obligated to do yet another Comedy Festival show. Two Hearts is not this. Two Hearts feels like not only two great comedians hitting new heights, but taking on a passion project and putting all their time and love into making it a reality. It’s ambitious as hell, and these two have the talent to meet that ambition, and then some.

New Zealanders are used to dark humour. We’re more comfortable joking about real things than we are actually discussing them. We’ll take the piss out of each other but we won’t ever actually criticize each other or tell somebody when they’ve done something wrong.

Sarah Harpur’s show Dead Dad’s Club revels in this dark humour. Taken at face value, it may well be the darkest show of the festival. Harpur talks about her dad, who died nineteen years ago, and how she dealt with the grieving, how she’s still dealing with it and how other people can continue to deal with it.

The frame of the show is strong; it’s framed as though we’ve all got dead dads and we’re in a kind of support group, and those who aren’t can just play along. Harpur is a tremendously likeable performer, and she undercuts the material with a beautiful and bracing frankness.

The first ten minutes involves a lot of apologizing and forewarning, which slows down the momentum of the show. The audience doesn’t need either of these things, they’re here to see a show called Dead Dad’s Club, they want the dark or at the very least they’re ready for it. When the content is as strong as Harpur’s is, it doesn’t need the apology.

The best, and most beautiful, part of the show is how Harpur breathes humanity into the grieving process once more. This is shit, but it’s also funny, we all go through it and we survive it.