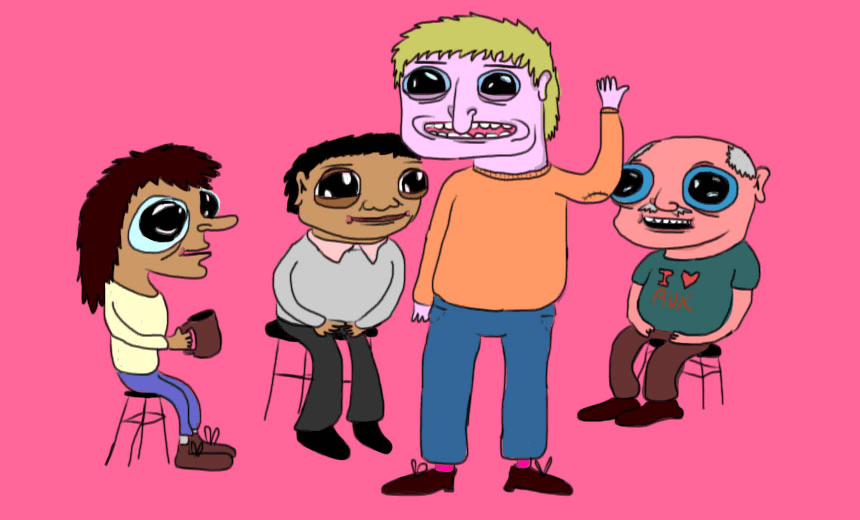 Sam Brooks on Dialogue: Identity and why you should absolutely come see it

Dialogue: Identity, proudly supported by The Spinoff, is a one-off storytelling event at Q Theatre this Friday, May 19. One of the performers, Sam Brooks (who also happens to be our Comedy co-editor), introduces the show here.

By now I’ve been in two workshops for the storytelling show Dialogue: Identity, which is the latest in the Comedy Festival’s annual series of storytelling events.

I was supposed to write a piece promoting it, giving you a behind-the-scenes look at the workshopping process and how people come to write their stories.

I’m not going to do that. One, because it’s very hard to sum up that process, and two, because it felt kind of sacred, special and raw being in that workshop process and I don’t want to share that with the public!

(You should absolutely come and see it, by the way. I’ve seen all of the pieces and they’re beautiful examples of storytelling from some of your favourite performers exploring different sides of themselves than you might usually see in their comedy or performances. I am one of these performers. If this interests you, you can book your tickets here.)

Instead, I’m going to do a thing that I started doing last year. I had a full-on mental breakdown, locking myself in my room for three days. During that time I wrote long letters to friends about why I admired them and why I loved them and why they were special. I emailed them letters to these friends, without prompting, warning or any real explanation. I wrote something like 50,000 words in three days.

I’m not going to have another breakdown, because there’s still a week left of the festival and a breakdown translates very poorly to this format. Instead I’m going to write little letters to the people also performing in Dialogue: Identity which are about them and why I think they’re awesome.

You might not want to read this! It’s very sappy and earnest. If that’s the case, please book tickets to the show here.

But for those who want to read me being sappy and earnest, read on, brave readers:

“Chris Parker is a superhuman. That’s the best word there is for Chris.

“When he’s onstage, when he’s onscreen, when he’s doing anything in his life, it feels like you’re watching somebody be the most person they can possibly be.”

I have endless amounts of respect and jealousy for Chris. There are lots of people who perform and write, especially in theatre where there are zero jobs and everybody has to do a little bit of everything to survive, but Chris is one of the few people who can do both equally well. Here’s Chris in last year’s Hudson & Halls Live! with Kip Chapman.

I know Randa least well of all these people! I feel bad about this. I know Randa’s songs and think they’re amazing. Randa’s performance for Dialogue: Identity is a really lovely piece about gender identity and harassment that spoke to me on a level I didn’t think I had. I really wish I had more to say, but instead here is a song by Randa:

Amanda Kennedy is one half of Fan Brigade! I saw one of their first RAW gigs at the Classic, and this is a cliche, but I was like, “Oh these guys are going to be huge.” Whenever I saw Amanda Kennedy over the next few years I would think, “Holy shit this person is well put together and knows exactly who she is.” You know when Amanda walks into a room, because the chemistry changes and the energy is redirected. You suddenly feel like you have to rise to meet the standard she’s setting.

I always (and by always, I mean since we’ve gotten to know each other) love talking to Amanda because she’s incredibly direct and frank, and also manages to be kind and understanding at the same time. That’s hard! A lot of people do the first and lack the second, or even worse, do the second and lack the first.

James Nokise is another one of those people who I’ve been in adjacent venn diagrams to but had never actually met. I think we definitely met in Facebook before we ever met in person, and absolutely before we had a proper conversation.

The first conversation I remember having with James was all the way over the other side of the world at the Edinburgh Festival. I was out with my best friend and a few of his friends, plus this one hanger-on, and we were getting cocktails. The hanger-on was saying things that I fundamentally disagreed with and even more fundamentally believe to be abhorrent points of view. When she said, “I think it should be All Lives Matter.” I finished the rest of my cocktail (which the bar had helpfully placed a limit of ‘one per night’ on), told my friend I would see him afterwards and Googled where the nearest show was on.

It happened to be James Nokise’s show, So-So Gangsta. I knew James well enough that I could just show up, so I did. I was incredibly drunk but I found myself thinking, “How has this human being not been in my life.” My thoughts about race, and my own mixed race, seemed to be coming out of this person with the most well-thought-out, rationalised and beautiful anger I’d ever heard.

I’ve gotten to know James better over this workshop through shared ‘really?’ looks and intense Facebook debriefs. This guy is an institution and everybody should be paying much more attention to the things he has to say, and there’s few people you can say that about.

I straight up think Angella Dravid is the funniest person in the world.

I saw her in a show called The Shittest Theatre You’ll Ever See, an incredible in-joke of a play written by Thomas Sainsbury and Natalie Medlock which parodied all the ways in which theatre is awful (theatre is awful in basically every way, so it had a lot of material to draw from). The biggest laugh came from Angella Dravid slowly walking a bike across the stage.

In a few years Angella Dravid will be more famous than any of us. Not only is she funny, there’s a forthrightness that endears her to an audience immediately. She is so open with us that we have to be open with her. Pretentious actors train for years and go to clown school in France to get the kind of authenticity that Angella Dravid seems to have naturally, or at least has earned through life.

Livi Mitchell is also half of Fan Brigade! I know Livi even less than I know Amanda, because I’ve rarely seen Livi out and about. Just the other night I figured out why: She lives in Huntly and commutes to Auckland.

After seeing Livi perform her piece, it made sense why she and Amanda are a duo. She has the same directness and the same kindness, in spades, and equally. They bring that to their onstage performance; they poke fun and they laugh, but they bring you in for both of those things.

This is the Fan Brigade’s set which bloody KILLED at the Gala a few weeks ago:

I was unfamiliar with Tourettes’ work before the first workshop, I’d heard the name around a lot, and I’d heard that he was bloody great. I feel the world of spoken word exists alongside theatre and comedy, with theatre being the snobby old sister who thinks she’s cool but nobody else does, and comedy the crazy younger brother who everybody likes but who can also be really goddamned annoying.

There’s a deceptive unassuming quality to Tourettes (or Dom, which is his name!). Society has presumptions about people, people who look like this talk like this, think like this, are like this, and Dom subverts those. His spoken word is florid and stark at the same time. He can also provoke an audience without it feeling like he’s attacking them. These are great skills! I envy them.

Here is a poem he wrote for ex-PM John Key:

Jackie van Beek is the host of Dialogue: Identity. I am not starstruck often, but I was very starstruck by Jackie van Beek. My first encounter with her was six years ago when I was assistant stage managing a Young and Hungry play and she was directing Tigerplay. I vacuumed the Basement Studio space, which was much grottier then than it is now, because she asked me to. I’ve never been so delighted to vacuum anything.

I’m still kind of in awe of Jackie van Beek, and it feels weird to write so earnestly about somebody I consider on another plane of existence to me in terms of talent and stature.

Basically, Dialogue: Identity is a show with a lot of people I have lots of admiration for. I hate most people, so this should be a good sign. It’ll be a really special night, and it’s maybe the most loaded line-up of the festival?

You made it to the end!

We have a special offer for readers of The Spinoff: $10 of tickets to Dialogue: Identity at Q Theatre this Friday 19 May at 8.30pm.

Just use the promo code: IDENTITY at the final stage before ticket purchase on Q Theatre’s website. N.B. The promo code box is under the ticket price box.

You can book tickets those tickets and claim that discount here.