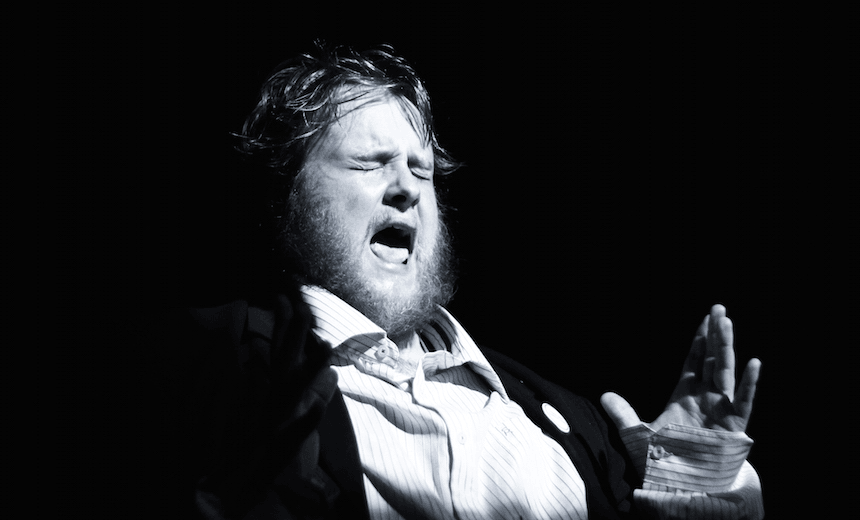 By Uther Dean
Guest writer
Made possible by

Uther Dean is a finalist in tonight’s Raw Comedy Quest Grand Final at Q Theatre – and he’s terrified. He explains why that is, and why there’s a big problem with stand-up comedy that nobody talks about.

There is one big problem at the very heart of stand-up comedy.

That problem is everyone.

Everyone is a problem because everyone thinks they’re funny. I once met someone who sincerely told me that they had never had an idea in their whole life. They still thought they were funny.

The baseline transaction of all performing arts is that you go to see someone do something that you can’t do. All performing arts that is except for comedy. Because everyone thinks they’re funny. And you think they are funny because you are funny. Everyone makes their friends or workmates or family laugh. Everyone is funny.

So, when a comedian stands in front of an audience, they’re not showing off a unique talent. They are not demonstrating a skill that only they have. What happens there is a status transaction, a power play. Comedians stand on stage to tell the audience that they are funnier than them. The audience often doesn’t agree, especially when they know the comedian they’re dealing with is still new or “raw”. It can get ugly.

Which is doing it. Imagine if the only way to learn to swim would be to dive into a shark tank. That’s what Raw Comedy is and that’s the only way it can be.

All of which is to say two things. The first is that I’m not exactly sure why I am a finalist performing in the Raw Comedy Quest Final (tonight, Thursday the 18th, 8.30pm at Q Theatre).

The second is that I am terrified.

I’m not sure why for many reasons. First of which is that I’m not entirely why I’m doing stand-up. Or even how. Yes, all the obvious clichés apply – I’m fundamentally damaged and need rooms full of people to tell me they love me to be able to come even close to forgiving myself for being alive – but the problem with those clichès is not that they’re not right, it’s that they’re also true of why literally anyone does literally anything literally ever. ‘We are all broken, looking to be whole’ is a subtitle God would cynically give a reboot of life just so he could change it for the inevitable sequel without adding an ugly ‘2’. Life: We Are All Frauds and so on.

I’m not sure why I’m there because I’ve seen my share of the heats and both of the semi-finals; I missed one act in the semis but he was me so you can forgive that, I hope. I know what I was up against. I saw how hungry some of those people are. I see how hard they work. I saw how well people did. It doesn’t make sense to me that I got through and some of them didn’t in the same way that I’m not a one hundred per cent sure why we exist at all.

Wouldn’t it just be easier to not?

Which is not to say that I don’t want it. I want this so bad I can taste it. Watching the other people in the semi-finals was a bizarre emotional experience. I was happy to see my friends do well because I am a human with empathy. I was sad to see my friends do well because that meant they might get to the final over me. I was happy for the show that no one bombed hugely. I was angry for me that it was everything to play for. When the audience laughed at a joke, I’d laugh too because it feels good. When the audience laughed at a joke, I cringed because they were using up laughs they should be spending on me.

All of those feelings hit me simultaneously and in parallel.

I go in ready to hate people for being better than me, but I leave hating myself for not being good enough.

Life: You go in ready to hate people for being better but leave hating yourself for being worse.

Backstage at a Raw Comedy gig is exactly how you expect it to be but more. Much more. People feverishly read their notes or try as hard as possible to seem like they’re calm or, for some terrible reason, make vile transphobic jokes despite seeming otherwise smart and cool. Once there was a guy backstage listening, on headphones, to classic rock at such a volume that you could faintly hear it on the stage. Different strokes for different folks. When I am there, waiting, I am not watching this procession of the tense absurd, I am inside of it. I am, I want to be so clear, one of those people. I tend to play Pokémon (as has already been reported by this fine organ) because it helps me pretend that if I can control the lives of tiny creatures, then maybe I will have some control over what happens on stage.

Which brings us to the crux of why I don’t understand why I’m in that final. Because it doesn’t feel like it’s me. It’s not that you become a different person so much as you just stop being yourself. You watch it, you watch you, but you don’t intervene. You have no control. Which is often why it goes terribly.

I will never forget that once, while bombing on stage at the Fringe Bar in Wellington, I saw in the audience a friend from primary school whom I hadn’t seen in over a decade and a half, with his head in his hands, unable to witness how badly I was doing. I wanted to call out to him and apologise. I wanted him to know that it wasn’t my fault that this material wasn’t landing, because it wasn’t me and we should get coffee. But I couldn’t. Because I was not in control.

I am terrified. Not because I think I’ll fail – there are at least five people in the final I have made peace with losing to – it’s because of that first thing. It’s because I’m not sure I’m funnier than everyone. And I’m not sure an audience can believe that. That’s the thing, the knowledge I don’t have yet. I know that everyone in that room is funny. What I don’t know is whether I am funnier than them.

And the worst bit – there’s only one way to find out.

The RAW Comedy Final is tonight! You can book tickets right here.