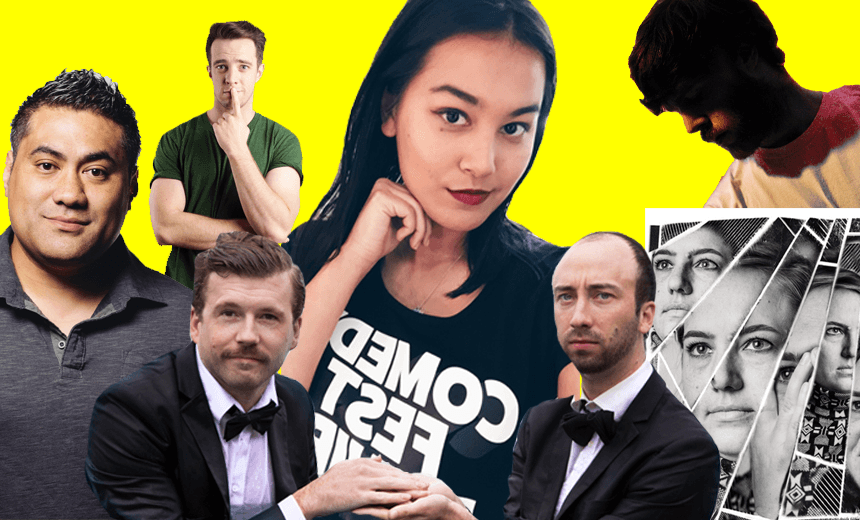 The Spinoff’s Comedy Fest Diary, Week 3: ‘My brain is broken’

Just as the biggest annual event in NZ comedy was getting underway, Spinoff Comedy co-editor Natasha Hoyland ended up in hospital. But now she’s back and raring to go – in time for the festival to enter the home straight.

I’m back! I’m alive! And I can tell you right now, it’s so good to be out of my house. I was starting to get a bit of cabin fever, but I’m back out in the festival world again and I feel great! Here’s my festival diary for week three, the final week of the festival – yeah it really is that quick! This is a summary of what I’ve got up to so far this week.

Wow! Tonight has been a wild ride! The week 3 shows opened tonight and I saw three of them back to back in The Basement’s studio. I usually hate seeing back to back shows in the same venue, but these were just so damn good that it didn’t bother me one bit.

The first was Alice Snedden in Self-Titled. Snedden is one of my favourite comedians around, and this show proved that even further. She’s so interesting, endearing, and so fucking funny. I think I was laughing constantly. She has a such a way with words, as cliche as that is, and every anecdote is either completely relatable or a string of words that would come out of no one else’s mouth except hers – there’s no in between here and it’s glorious. I am in absolute awe of Alice, and I think everyone who left this show felt the exact same way.

I headed back into the same room again to see Billy T-nominated Paul Williams in Summertime Love, a show where he claims to help you find your one true love. If his intention was to make audiences fall in love with him, then he really succeeds. Paul’s hour is filled with beautiful and funny songs, surprisingly good dancing, slides, and genuine life tips. It’s a great time. Paul is incredibly talented, and it’s hard not to find yourself swooning over him. Plus, it all comes full circle in the end with a finale that almost had me in tears. While opening night nerves were definitely present, I reckon he’ll completely hone this performance by the end of the week and it may even win him the Billy T.

Right after that I went and saw Fuq Boiz, which is a show I’m producing that consists of the unlikely duo of Hamish Parkinson and Ryan Richards. I went mainly because I knew I was going to have to help clean up the huge mess afterwards – the actual mess that is, this isn’t a metaphor for the show being bad or anything. I was sweeping up baby arms and soft toys, to give you a bit of an idea of what you’re in for. Despite that, nothing could have prepared me, or anyone for that matter, for Hamish Parkinson’s unexpected and unscripted you-can’t-write-this-stuff wardrobe malfunction that left him pantless for half the show. I tried to write out the context of how it happened but it literally did not make any sense, so I’ll leave it at this: he somehow managed to split his pants completely in half, like into TWO SEPARATE PIECES and the bits just hung around his ankles for the rest of the show, stuck around his shoes. He tried for about 7 minutes to get the completely destroyed pants off to no avail and then just gave up, continuing the show as is. I cried all my make up off because of this, it was one of the funniest things I’ve ever seen in my life. I think that Hamish’s pants are going to win the Fred award and I hope they can replicate this every night.

I am not coping team, I am not coping. To give you an idea of how much I’m not coping, I was eating takeaway curry at 10am this morning. Anyway, let’s talk about happier times. Last night I only saw two shows, an 8:30pm one and a 10pm one. I didn’t see a 7pm one like I usually do because I was at home practising life drawing, but we don’t need to talk about that.

After being peer pressured into buying a wine that I didn’t actually want to consume, I went downstairs into Vault at Q Theatre to see Li’i Alaimoana, another one of this year’s Billy T nominees. From my own experience, Wednesday nights are hard to sell, and both shows I saw last night had small crowds. On stage was a keyboard and a guitar, and I was really excited to see Li’i perform with these as I had seen him do a short set with a guitar at the Billy T Jams showcase earlier on in the year. There wasn’t as much musical stuff in the show as I thought there would be, and I was a bit let down by that, but when there is musical stuff, it is very good. This guy has an incredible voice and I hope someone gives him a record deal immediately.

However, this didn’t really feel like a stand up show at all. I felt like Li’i was just talking directly to me for most bits, and some bits he actually was – he likes to get to know the audience personally, which is something I’ve never really seen any other performer do and something I think he’ll absolutely nail the more he does it. He’s a really lovely humble guy, and that’s evident in his considerate stage presence and constantly checking in on the audience. I just don’t think this show was ready. This was Li’i’s first comedy festival show, and an hour is a long time to be up on stage. While it is definitely something new and an interesting concept for a show, I don’t think it’s quite there yet, but there is so much potential. He’s got a damn great voice and I wish he had utilised that more in the show – I didn’t want him to stop singing! Also his show is called Minority Rapport, which is possibly the greatest show title in the festival, so he wins that award at least. I’m intrigued to see what he does next.

I headed to Eli Matthewson‘s show The Year Of Magical Fucking next, and was pleasantly surprised to find Livi and Amanda of The Fan Brigade sitting in the crowd with Tamati Coffey, who was wearing a shirt with their faces on it. If you know The Fan Brigade you will know that this was an absolutely iconic moment. Eli captures everyone’s attention from the moment he steps out on stage and manages to hold it for the duration of the hour – which is something that’s very hard to do especially if some people in the audience have seen 20+ shows in such a short space of time and are dying. He’s hilarious. I don’t really know what else to say, my brain is broken. Eli is one of the most solid stand ups in the country at the moment and if you like stand up or fucking, or even if you don’t like fucking, you will like this show.

I’m starting to plan the rest of my week now and despite being very exhausted, I’m still really excited. I’m planning to see the rest of the Billy T nominees, Angella Dravid, Ray O’Leary and Patch Lambert because I like to make predictions – I don’t wanna brag, but I’ve correctly guessed three previous Billy T winners (I’m not gonna say which ones). Let’s see if I can do it again. I’ll also be seeing Ben Hurley’s show that involves a rock band apparently and Jarred Fell’s show where he is making a $10,000 dollar bet.

And that is my week so far! No one should ever ask for my opinions ever again.