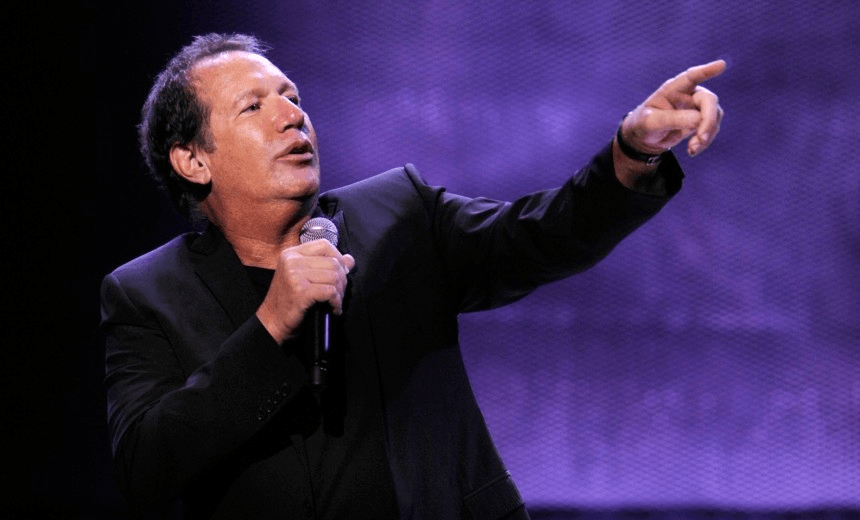 For three decades, Jesse Mulligan has followed his favourite comedian to the point of obsession via every available medium, facsimile included. On Garry Shandling, who has died at 66

Before YouTube, it was so much harder to follow the careers of the comedians you loved. I’d fallen hard for the comedy of Garry Shandling when TV2 played his sitcom It’s Garry Shandling’s Show late on a Saturday night, and when the series disappeared (four seasons, Wikipedia tells me, though I can’t believe we got more than one or two), Garry disappeared here, too. In the States he was still guest hosting the Tonight Show and doing comedy specials but in New Zealand it was like he’d never existed.

From the opening bars of that sitcom’s theme tune it was clear this wasn’t like any other TV show.

But while, like The Be Sharps, that theme music was a gag that got slightly less funny every time you heard it, there were moments in the show you could watch over and over again, just to enjoy the nuances of Shandling’s performance. Like the theme song, many of the storylines were pre-meta Meta. Like the time Shandling’s neighbour Tom Petty came over to return his hedge trimmers.

“Would you like to play a song while you’re here?” says Shandling, as his living room reverts to concert lighting and somehow Petty acquires a guitar. “Is this microphone stand okay?” he asks, taking it out of the broom closet. “Because I have others.”

I don’t know how long it was between the final NZ screening of that show, and the appearance on Sky’s HBO channel of Shandling’s one-off standup comedy concert, but it could have been five years. Back then, we knew how to wait. My family hadn’t paid for the HBO channel, but even though the picture was digitally scrambled you could listen to the audio, and with Shandling’s comedy – verbal, clever, joke heavy – sound was all you needed.

I taped that concert and must have replayed it hundreds of times, learning every joke by heart. “I once had sex for an hour and five minutes. It was on the day they put the clocks forward, but I don’t think she noticed.” And, “I said to the doctor, ‘My penis is burning,’ and he said, ‘Oh that just means somebody’s talking about it”.

The only joke I didn’t really understand was when Shandling said, “Right then he did something I’ve only ever seen blackjack dealers do”, then there was a pause where he mimed something and the crowd applauded for about 15 seconds. What could he possibly be doing?

One day in my local dairy I saw a Playboy magazine with a Garry Shandling interview advertised on the cover, so of course I had to buy it: a 17-year-old sitting on a park bench laughing along to an adult magazine.

I started university, and one day saw a sign advertising a first-timers’ stand up comedy competition. This was too good to be true; I could actually get up and be Garry Shandling! I wrote 10 minutes of heavily derivative material – to this day, like Shandling, I can’t write a joke that doesn’t start with “I” – but it was promising enough that I won and went through to the next round, a national competition where I, the Waikato team, went up against Jemaine Clement, Taika Waititi and Bret McKenzie from the Victoria team. It did not go well.

After two gigs I felt like I needed some mentoring, so I acquired the fax number of Shandling’s agent in Los Angeles and sent him a fax asking for advice. He did not fax back.

But it didn’t matter because he had a new show, The Larry Sanders Show, every Thursday on Sky’s Orange channel, after Dream On but never at the time it said in the guide, so if I wasn’t home I’d have to start the video recorder half an hour early and finish it half an hour late.

We got at least four seasons of that, and every episode was incredible – funny, experimental, sometimes moving. He played a late night talk show host, interviewing famous people, playing versions of themselves. Here’s Larry’s sidekick Hank talking to Fonzie about his sextape.

The script was half of it, but then there were these little camera and editing tricks that felt revolutionary even to my untrained eye. In England, Ricky Gervais was watching too, and I later saw him talking about specific moments from that show that he replicated in The Office.

But eventually even The Larry Sanders show was gone, and there was nothing again. For years I had to rely on catching the odd cameo or voiceover role in movies like Dr Doolittle and Zoolander, but watching him do other people’s stuff wasn’t the same.

In 2005 I spent all my money on a ticket to the Comedy Festival in Las Vegas, where I was rewarded with what might be the most exciting two hours of my life – a panel discussion on comedy featuring Jerry Seinfeld, Chris Rock and Garry Shandling. He was almost close enough to touch, definitely close enough to fax, and I got to see him unedited in a forum which was by then, I think, much more interesting for him than performing comedy – talking about it, and taking it apart.

He’d always made awkwardness a big part of his schtick, but he was starting to get interested in the art created when you use awkwardness to disrupt somebody else’s flow. There’s more on this in a GQ feature Shandling featured in a couple of years ago, but you can see it emerging in his appearances on Letterman in the late 1990s, and it reaches its uncomfortable zenith in Ricky Gervais meets … Garry Shandling, a television special made around ten years ago where Gervais turns up at Shandling’s house for what is meant to be a mutual admiration society but which Shandling turns into one of the most horrific TV interviews of all time by being actively hostile for much of the conversation.

By then, YouTube was up and running and I had plenty of opportunities to watch all the stuff I’d missed out on as a teenager on the wrong side of the Pacific Ocean. It must be 30 years ago that I came across Shandling and there hasn’t been a day since then that he hasn’t been my absolute favourite comedian in the world. His output since the Larry Sanders Show has been low, but that’s probably a good thing or I’d have never got anything done.

I found out he’d died this morning, on Twitter of course, which has been the only place to get a regular Garry fix over the past few years. It seemed unimaginable to me that somebody who had been so important and elusive for the formative part of my creative life could now be just here on my phone, tweeting funny and insecure and sometimes angry thoughts late into the California night.

Twitter is where opening up to strangers feels natural, of course, and one day somebody was tweeting about Garry Shandling and I tweeted back, telling them the story about how I’d sent him a fan fax back in 1995. I joked that I was still waiting to hear back.

A few seconds later, from somewhere in the California night, came a tweet sent to me from Garry Shandling himself: “Fax machine still jammed”.