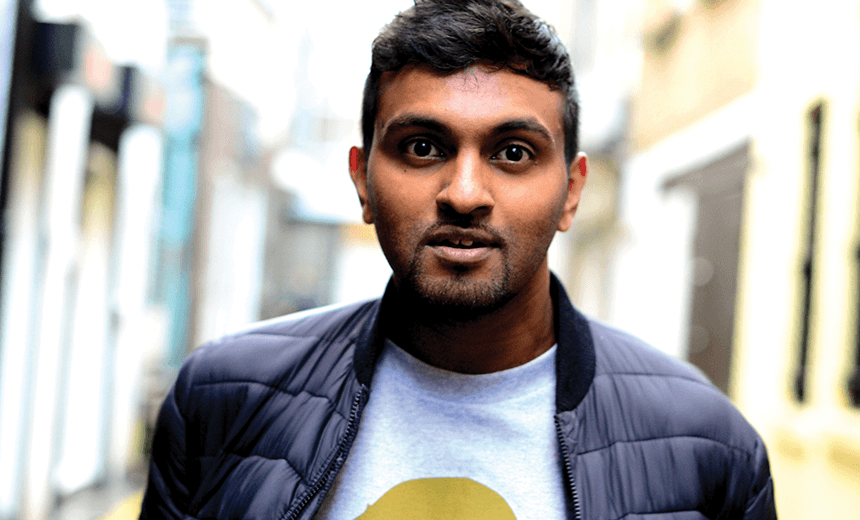 Nazeem Hussain on stand up, ‘I’m a Celebrity’, and why NZ comedy will be the next big thing

Natasha Hoyland caught up with Australian comedian and actor Nazeem Hussain backstage at the Flick Electric Co. Comedy Gala to talk about his experiences in comedy, living in the jungle, and talking to strangers.

Natasha Hoyland: You were on the latest season of the Australian version of I’m a Celebrity…Get me Out of Here!, right? What was that experience like?

Nazeem Hussain: I’m a Celebrity was a really crazy, surreal experience. You’re in the jungle with people you don’t know and wouldn’t ordinarily ever choose to be around, you’ve got barely any food, barely any contact with the outside world, and it’s being filmed. You also have to shower and go to the toilet in a bucket and eat disgusting food and do horrible and scary challenges. Yet given all that, I actually really enjoyed it! It was bizarrely, one of the best experiences I’ve had in my entire life, and it’s great for comedy.

What was the worst thing you had to do?

I had to eat gross parts of animals, from ostrich anus to goat testicles, and I don’t know if that’s worse than prison or not. At least in prison when you’re eating anus, you know the guy’s name. But nah, I think all that stuff is actually not as bad or as stressful as living with people you wouldn’t spend time with normally. I guess I’d call myself a politically progressive lefty person, and I was there with a guy who was a conservative shock jock whose ideas of the world would not sit with me well normally, but we kind of had to become friends in the end. So that was tough, but it was also quite nice, I made some really good friends.

I didn’t realise how crazy this was or how many people actually watched the show until I got out of the jungle. I got back to Australia and the first time I really realised it was a popular show, I was on the train and there was this guy sitting across the carriage and he just yells “Hey! You’re from the jungle!” and the guy next to me didn’t really know what he was talking about and just thought that guy was really racist, but then the rest of the carriage was just like “oh my god, yay! Welcome back!” and started applauding, which was very bizarre.

How long have you been doing stand up?

Oh man, it’s coming on like 10 years or something, but I’ve been doing it full time only for the last four years. Before that I was working as a tax lawyer balancing law and comedy. I’d be doing my suit job during the day and then after work I’d go straight to the city, take my jacket off, put on a t-shirt and do comedy. So sort of balancing two lines. I did my own TV show and that’s when I had to make the move, I couldn’t do two things, so I just went full time as a comedian.

Legally Brown is a great series that I’ve binge watched recently. Lot’s of cool people are involved like Ronny Chieng, Matt Okine and Luke McGregor. What’s it like working with them?

To be honest, you sometimes forget that what you’re doing is going to be shown to a broader audience. Like, you just muck around with your friends just being absolute idiots, and then at the end of the day the producer will be like “that was awesome, can’t wait for that to go on TV” and that’s when it sort of dawns that “this is shit, we just made fools of ourselves”, but it was so much fun, and I think that’s one of the best things when you’re making comedy. We’re all still quite close, and Ronny and Matt have gone onto huge things, Luke as well, I think we’re all pretty excited about each other’s successes and it’s fun being able to have worked together before we all got super busy.

What’s it like filming stuff with people on the street? Like the terrible translator bit where you take the prince to go and buy things?

I get a real buzz about annoying people that I don’t know, especially knowing that there’s a camera there and that other people are going to find it funny. But in the moment, seeing people get annoyed by me doing the most stupid, silliest things just brings me great joy. I think I’m like a real life troll. But it can sometimes be scary, because there’s a lot of adrenaline going into something like this because you don’t know when someone’s gonna punch you in the face. It’s like comedy on the run, like you figure it out as you go.

I think I’d just crumble under pressure as soon as anyone questioned what I was doing.

That’s the thing, when I’m with people on the street and I feel like they’re just starting to catch on that I’m up to something, that’s when I just go even more overboard and even more into character.

Like the one where you drop off random things at people’s workplaces.

There was one where I was driving around refugees and pretending to be a people smuggler, and people were helping me, it’s real bizzare because people say and do certain things when they don’t know they’re being watched, so I like testing that. It’s so weird.

I love the hostage one.

Dropping off the hostage! Yeah and the guys at the washing place didn’t really know what to do, they just took him and let him stand by the sign for a good five minutes and then someone came over like “are you alright? Do you need help” and then they finally untied him. The funniest kind of comedy for me is when it’s real, so when it’s not made up and when the stories are real.

What is your comedy festival show about?

It’s kind of a mixed bag of stuff, I joke about the one time I tried to get fired from my job and it involved me emailing the CEO constantly, to me talking about taking my mum on tour, to Donald Trump, to Pauline Hanson, to my time in the jungle. So really just an hour of me telling jokes and being silly, so hopefully people laugh. There’s politics and stuff to do with race, but it’s mostly stories from my life and last year.

Are you planning on seeing any other comedy while you’re here?

Rose Matafeo, Ben Hurley, I love him, yeah, I like checking out local comedians. I feel like New Zealand comedy is so much different to the rest of the world, it’s so much quirkier and it’s sometimes a lot less obvious. Sometimes I think you’ve got to be a real comedy person to appreciate New Zealand comedy.

I think so too.

I think it’s awesome and I think it’s going to be the next big thing globally. It just has that feel.

You can book tickets to see Nazeem Hussain’s show Public Frenemy as part of the NZ International Comedy Festival here.