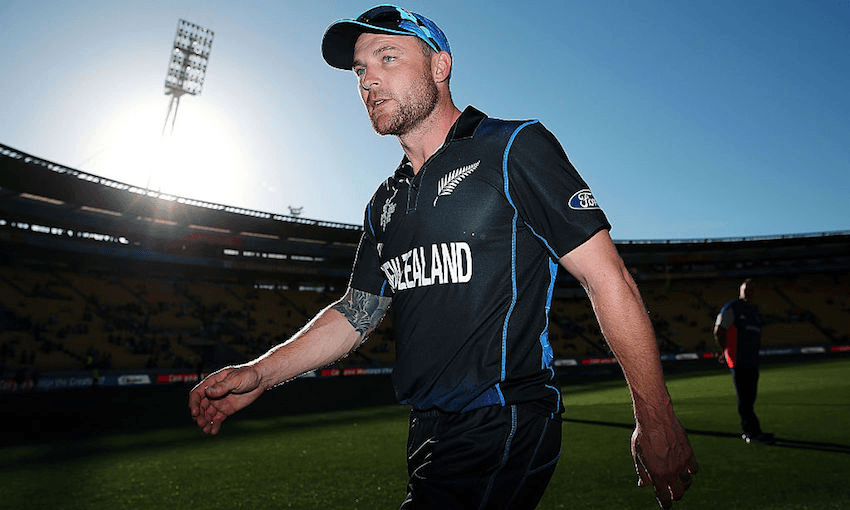 Ahead of the Black Caps’ first match in the 2019 World Cup, superfan Simon Day longs for his former leader.

Every day I miss Brendon McCullum. Whenever he was on the field as captain I felt an unusual sensation as a longterm Black Caps fan – optimism. No matter what the scoreboard said, I thought “we’re winning,” because Brendon did too.

The way he chased the ball to the boundary like a starving cheetah desperately hunting an impala inspired his team, and the crowd. His field settings used variation and innovation to unsettle batsmen and bring out the best of his bowlers. He attacked. Always attacked, believing the best way to win was to keep taking wickets.

Listen to The Spinoff’s new cricket podcast, The Offspin, where our resident cricket tragics (in the truest sense of the concept) keep you company through the long nights of the World Cup.

It’s hard to actively captain while batting, but the freedom with which McCullum swung his giant willow was an endorsement for the rest of the team to play their natural game. And when he was on with the bat, there was nothing more inspirational than watching McCullum plunder bowlers to every corner of the ground.

It meant the Black Caps became a team greater than the sum of their parts. The 2015 squad was flawed, short a bowler or two, without a wicketkeeper who could score runs, and before Ross Taylor got new eyes. But it was team McCullum lead to New Zealand’s first World Cup final because of the way it played for each other, and for him.

He was raw and honest. Before he controversially assumed the team’s captaincy from Ross Taylor, a young McCullum had stopped enjoying the sport because of the way he’d been labelled by the sport’s administration, and the commentariat, as brash and selfish. But as the leader, he was able to define the culture and relish the fact he got to play cricket as a job again. Win or lose he never forgot how lucky he was to be playing sport for a living. He forced that appreciation on to his team and because of that, they appeared to find pleasure in every moment they got to spend on the field together. He made cricket look fantastically fun. Even if we lost.

Under his guidance, New Zealand became one of the most exciting cricket teams in the world. It was also one of the most admired for the attitude with which it approached the game. Other teams and captains looked at McCullum and the Black Caps and were jealous of the way they played, and the way they enjoyed playing.

England captain Eoin Morgan is a close friend of McCullum. And the former Kiwi captain (who was MC at Morgan’s wedding) was the inspiration for England’s transformation into the best team in the world over the last four years. In 2015, under Morgan’s leadership, the English were humiliated, knocked out of the tournament in the pool stage. Since then, Morgan has completely remodelled their approach, and they are favourites to lift the cup at Lord’s in six weeks. This change was modelled on McCullum.

“I’ve played against and I’m extremely good friends with Brendon McCullum,” Morgan told BBC’s Test Match Special podcast this week. “If you look at his body language at any stage of any game it’s extremely positive, it’s always on the front foot, everything is meant in the right way, and he’s leading from the front. Regardless of the scoreboard, regardless of the situation of the game. As a pure leader, I think he is exceptional.”

“I think New Zealand cricket had embodied playing fun cricket. Playing against them, we were a little bit jealous. We weren’t enjoying our cricket as much, we didn’t seem to see that side of it as much as they did and that was something we wanted to change. Transforming your game from an average-scoring side to somebody who might score 350 or 400 is extremely exciting and fun to be part of.”

In the high-scoring, and celebrated, five-match ODI series between the Black Caps and England directly after the 2015 World Cup, suddenly a new type of England started to emerge. They were attacking and positive, and looked like they were having a blast. It was modern cricket at its finest. McCullum’s style has helped change the way one day cricket is played. Morgan’s England has taken it to a new level in the last four years, during which time they have an average run rate of 6.29.

But ahead of the Black Caps first World Cup match, McCullum appears to be a distant memory for New Zealand, who look like they’ve lost the confidence that came with his leadership. As Dylan Cleaver points out in his always fantastic cricket analysis for the NZ Herald, “one of the few teams that didn’t follow the blueprint the Black Caps laid out in 2015 is, well, New Zealand”.

Kane Williamson is a good captain. He’s a very smart and talented cricketer. He’s more talented than McCullum, and smarter than McCullum. But not only must leadership be done; it must also be seen to be done – especially if you want to take the fans with you.

Their captaincy styles differ in the same way as their approach to batting. Where McCullum was assertive, Williamson appears watchful. Under McCullum the team’s culture was palpable. He was a visible leader on and off the field. His captaincy was an embodiment of his chilled, sociable personality. Williamson seems more withdrawn, almost robotic, less captivating. Similarly, this Black Caps team is less alluring, less exciting, they’re scoring slower and winning less.

It would be unfair to place the blame only at the feet of Williamson. There has been an array of strange selections, and questions about New Zealand Cricket’s culture that have gone unanswered. And it would be wrong to ask Williamson to try and impersonate his former captain, he has a right to create his own legacy. But the team needs to find its spark, to rediscover the thrill of 2015, before it gets left behind by McCullum’s protégés.