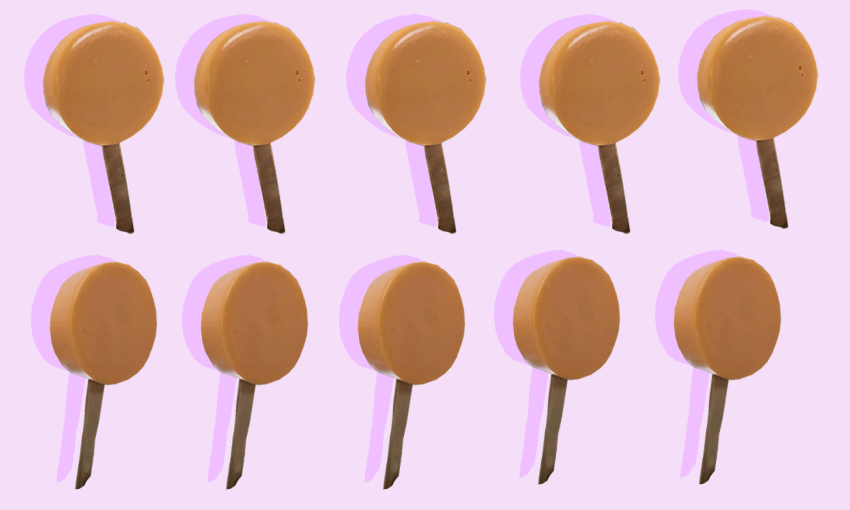 Operation cheese lollipops: The mission to uncover a most unusual snack

When most New Zealanders think of Fonterra they think of milk – thousands and thousands of tonnes of milk sloshing around in tankers on their way to supermarkets, dairies and cafes across New Zealand every day. They don’t necessarily think about gut-health probiotics being made from billions of strains of bacteria or high protein liquid superfoods being engineered for the convalescing or the elderly.

And why would they? Much of that stuff is being developed behind closed doors at Fonterra’s research and development complex in Palmerston North. But on the day the dairy giant opened its facility to the media for the first time, it wasn’t the probiotics I was most interested in. Nor was it the superfoods. It was the cheese lollipops.

I had heard rumours about the cheese lollipops before I went to the R&D facility, but they were only rumours. I had no idea what they tasted like, where I could get them, or why they even existed. All I knew was that Fonterra produces the lollipops almost solely for the Chinese market, where, it turns out, they’re an insanely popular product. Kids love them because they’re apparently tasty. Parents love them because they’re perceived as a healthy snack. Fonterra loves them because China loves them.

But for me to find, and taste, those mysterious devils somewhere in the sprawling R&D complex, I would first have to get past Fonterra’s vigilant staff. They probably suspected my motives, because they kept trying to distract me with friendliness and hospitality: singing waiata and giving me delicious snacks and Fonterra-branded gifts. They even rolled out Miles Hurrell, the co-op’s CEO, to welcome us personally. I knew what they were up to, but I was on a mission, and I would not be intimidated.

The media contingent was split into groups and each assigned a guide who would escort us through the (non-sensitive) areas of the facility, where we would meet the various scientists and technicians. Our guide was clearly a skilled operator, charming us with jokes, conducting us through the many corridors and labs and ensuring we only saw what she wanted us to see.

Fortunately, prior to my arrival, I had managed to conceal an ingenious camera on the back of my cell phone, which enabled me to capture valuable pieces of intel. This came in handy throughout the day when we met the co-op’s top sustainability experts, then the genome-sequencing scientists developing probiotics, and the customer connection specialists working with VR headsets to allow customers across the world to view the manufacturing process at Fonterra’s facility.

As interesting and innovative as all these things were, however, they were not cheese lollipops. It was nearing early afternoon and I was running out of time. I’d never be able to escape the gaze of our watchful guide, I thought. If I couldn’t get away, the cheese lollipops would forever go untasted.

But then something unexpected happened. Perhaps our guide had decided to go rogue. Or maybe she felt the cheese lollipop secret was too important for Fonterra to keep to itself. Whatever the reason, after navigating a complex labyrinth of corridors and stairs, she led us into a white laboratory, where three scientists in white lab coats stood silently behind a white table. And there, on the table, were the cheese lollipops.

They were peach coloured, smooth. They gleamed in the fluorescent light. I managed to capture a few pics of those cheese lollipops, right before the lead scientist, Donna McBride, started talking. A cheese lollipop, McBride said, was a fruit-flavoured piece of processed cheese on a stick. They were a massive and growing trend in dairy-loving China, where they were retailed as a healthy children’s snack. While Fonterra didn’t invent them, four years ago they had taken the concept and increased the cream cheese content from 15% to 40%, replacing much of the other less natural ingredients. Under its NZMP (New Zealand Milk Products) brand, Fonterra ships 20kg blocks of cream cheese to manufacturers in China, where it’s made into lollipops according to the specified recipe.

Just when I thought I would have to sneak a lollipop from the table, McBride gestured for us to sample one. Hands shaking, I picked one up and took a bite. It was smooth and creamy, slightly sweet, apricot flavoured. I finished it and ate another. One of our group asked if he could take some lollipops home for his son. An ingenious ploy, I thought.

Then one of the scientists asked if we’d like to try a tea macchiato – a strange and trendy concoction which involves liquid cheese poured into cups of tea to sit on the surface like the head on beer. It turns out cream cheese beverages are an even bigger market in China than cheese lollipops, and NZMP produces the world’s first ambient cream cheese which stays liquid despite temperature change. The wait times for tea macchiatos can be so long in China that it’s spawned a new industry of line holders, whereby someone saves someone else’s space in the queue in exchange for payment.

I took a sip from the cup. It tasted like cheesy tea. I’d seen enough.

I had gone over and above my mission, and I had developed cheese fatigue. That morning, my dairy universe had been limited to Kiwi staples like flat whites, Neapolitan ice cream and maybe, if I was feeling adventurous, a slice of Edam cheese. Now it was all cheese lollipops and cheese tea.

I’d decided this was the pinnacle of food science. It couldn’t get much more radical than this, and if it did, I didn’t want to know.

But as we were leaving the building, I heard one of the Fonterra staff say that the company’s newly patented recipe for super-stretchy mozzarella was so secret that even the CEO wasn’t allowed to know it. The journalist in me started planning my next mission.

Some stories just need to be told.