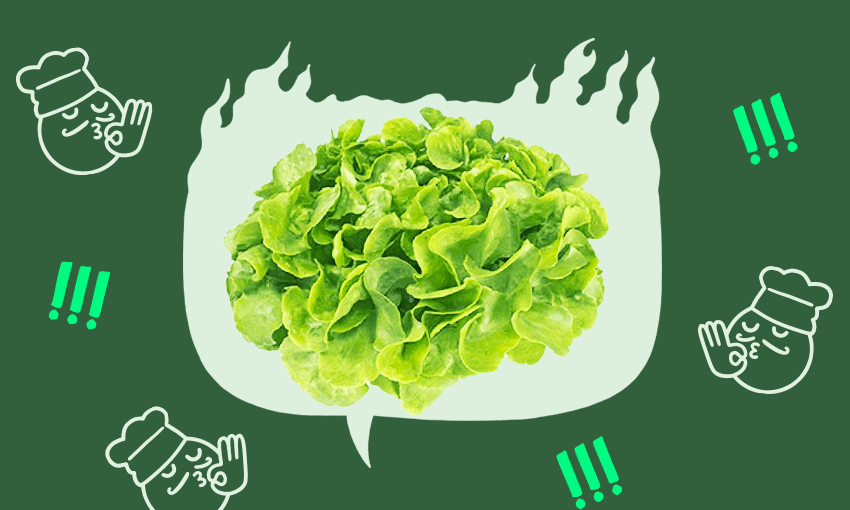 A bit of heat can save a wilting lettuce leaf. (Image: Archi Banal)

A bit of heat can save a wilting lettuce leaf. (Image: Archi Banal)

Those sad-looking head of iceberg or bag of mesclun needn’t be tossed in the bin just because they’re no longer saladworthy.

All too often, lettuces are left languishing in the fridge chiller after we’ve torn off the six leaves we needed for burger night or abandoned our grand plans for Caesar salad lunches. Eventually, we give up and hurl the sad-looking foliage in the rubbish. In winter, things get even more tenuous – who wants a big bowl of frigid leaves as you dodge the draught? Between the cost (medium-sized globes of iceberg are going for seven dollars at the supermarket) and the risk of it going to waste, many of us will be considering leaving lettuce off our shopping list all together.

But there is another option many have never considered before: you can – and should – cook your lettuce. Through no fault of its own, lettuce has become destined to be eaten raw and only raw. We’re limiting ourselves, and we’re limiting lettuce.

It may seem incongruous with what we’re used to, but deployed into a hot pan or pot, limp leaves can be saved. The spooky and the wilted are morphed into something delicious, and perhaps most importantly in this weather, something warm.

There’s something gratifying about using up every last scrap – and with food wastage on the rise, it’s never been more important. Food waste has increased since last year, which means we’re all throwing away more of our hard earned money and food.

While cooking foods normally eaten raw may seem rather alarming for some of us, it’s perhaps more unusual that we don’t cook our lettuce more often. In China, it’s extremely normal to cook lettuce and serve it either hot or cold, in soups, stir-fries or as cooked salads. The Romans apparently cooked their lettuce leaves before dressing them with oil and vinegar. And in post-Roman Europe, lettuce was often poached or cooked by pouring hot oil and vinegar over the leaves. Here are four of my favourite ways to cook maturing lettuce at home.

Drooping lettuce lends itself particularly well to soups. On the simplest end of the soup realm is this recipe, where an amalgamation of potatoes and leaves that might otherwise be wasted are turned into a silky greenish soup. Portuguese caldo verde is made with potatoes, chorizo and most commonly, kale. But the green element can easily be swapped for most kinds of lettuce that you have on hand. If you’re in the mood for something a little more intricate, try Marcella Hazan’s recipe for Italian stuffed lettuce soup, which is traditionally made with brains and sweetbreads but in her version is swapped for a pillow of veal and chicken inside lettuce leaves.

Garlic is a requisite when you’re dealing with lettuce in any of these three situations. Try adding whatever greens you have that need using to a pan with butter and garlic to sautée or braise. Or, to roast, brush wedges of hardy varieties like romaine or gem with olive oil before they go in the oven. Additions like pancetta, mustard, fennel seeds, onion, chilli or feta will only make things better. No matter how you decide to cook your lettuce, finish with some form of acid: a squeeze of lemon; a dash of apple cider vinegar; or a sprinkling of dried barberries or pomegranate seeds.

There are a bewildering array of options when it comes to stir-fried lettuce. You could add lettuce in place of greens like bok choy or kai lan in a medley of vegetables, or simply hero your lettuce with garlic, oyster sauce and sesame oil. Traditional Chinese lettuce varieties like yau mak choy or celtuce, are ideal, but anything from cos to iceberg or a bunch of fancy will do the trick. For a quick dinner or lunch, serve nestled in a bowl of steamed rice with a crispy fried egg atop.

In my humble opinion you could just substitute lettuce into whatever risotto recipe you normally use, or that you find on google. There’s a comforting austerity in knowing that you can turn a haggard lump of lettuce into a bowl of risotto.

Like all vegetables, lettuce is maligned, but there’s immense joy to be found among its leaves, especially if you cook them. Curly frisée and raggedy escarole. Loose rosettes of little gem or romaine. The certain crunch of verdant butterhead. 100g bags of rocket and mesclun inflated by air (and price too). I love that the frilled heads of lettuce many countries call Batavian, we simply call “fancy” here. People from the Portuguese city of Lisbon are nicknamed “Alfacinha”, meaning “little lettuce”. No one really knows why, but it could well be because of their fondness for the leafy green – and it’s no coincidence that they make the best salads in the world.

In his 1964 book The Raw and the Cooked, French anthropologist Claude Lévi-Strauss argued that the preparation of food is a form of language that reveals a society’s structure, that cooking transforms food from nature to culture. Along similar lines, I’d argue that cooking lettuce transports it not just from nature to culture, but from the everyday to the miraculous; from the wilted to wonderful.