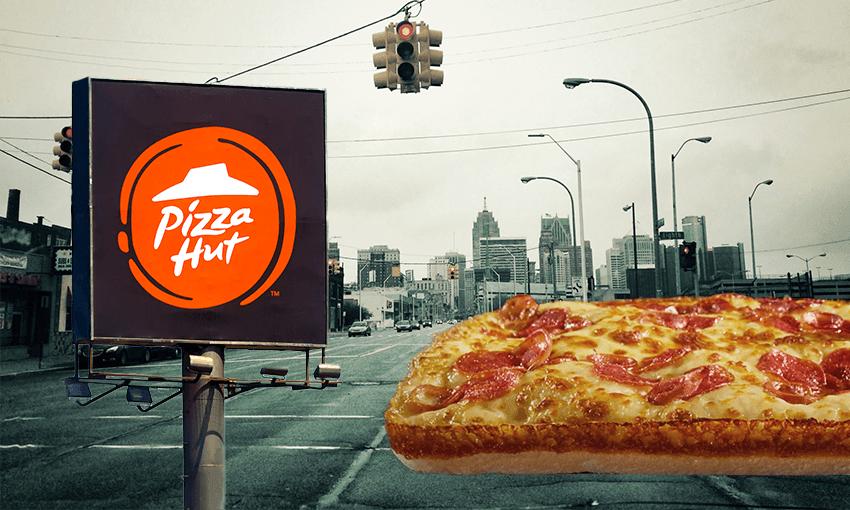 By Courtney Hilden
Guest writer
Made possible by

How does the Aotearoa arm of the global chain stack up when it comes to replicating a much-loved US regional delicacy? Courtney Hilden’s verdict is in.

So there I was, at around 9 o’clock at night, watching YouTube, when a commercial came on that blew my mind.

Of course, New Zealand Pizza Hut’s been offering regional American pizzas for a few years now, like New York style and San Francisco style. But Detroit? I knew I had to try it. Why? Because I grew up in Detroit, and I love the city and its food.

For those of you not familiar with Detroit-style pizza, it’s characterised by its rectangular shape, sponge-like base and thick crust, all topped with marinara sauce “racing stripes”. The shape is traditionally achieved by the use of blue-steel pans, which came from the city’s famed auto factories then recycled into baking pans.

Buddy’s Pizza, which is still around, claims to have invented the Detroit style right after the second world war. Buddy’s was run by an Italian immigrant family who were inspired to use focaccia as the pizza’s base. In some sense, Detroit style is a combination of two important things about Detroit: its car factories and its Italian immigrant community.

So how does the Pizza Hut version stack up?

I decided to review two of the three pizzas on offer: the pepperoni and sausage and the cheese. When I got my order, I swear to God it even smelled different, and it reminded me of home.

I struggled to pry the cardboard lids up, because they had been smashed into their respective crusts, half gluing it in place. But on first glance, things looked promising. The two pizzas were in the traditional square shape, though a little smaller than most authentic Detroit-style pizzas. They were sliced a little differently, more like pizza “fingers”. Usually a Detroit style will have square or close-to-square slices.

The base was also different. Usually it’s fairly thick, spongey and completely yellow from soaking up the butter. The Pizza Hut version was a little too thin, especially at the edges of the pie. It needed an extra centimetre. It was also mostly white, a sign that it had not absorbed certain ingredients.

I have to admit that, from an aesthetic point of view, I’ve never really liked the marinara sauce racing stripe on a Detroit-style pizza, but I love the taste of marinara – and the marinara on Pizza Hut’s offerings was bang on, exactly like you’d get in Detroit. For any Detroiters reading this, it was like the marinara dipping sauce you get from Jet’s (which is probably the second-most famous purveyor of Detroit-style pizza, after the inventor, Buddy’s), or Little Caesar’s (which is also a Detroit institution, though not one Detroiters usually associated with Detroit style).

And finally: the crust. In my opinion, the best part of a Detroit-style pizza is the crust, and I’d argue it’s the most important part too. Many foodies describe it as a “caramelised crust”, but I’ve found that people don’t understand what that means. Basically, it has cheese and butter baked with the dough until it’s chewy.

The Pizza Hut versions’ crusts were solid – chewy in the right way, but a little thin. Like the base, they probably needed an extra centimetre. I’d wager the pizzas were probably not made in deep enough pans.

As a side note, for those of you who have never had a Detroit, the best pieces are always corner slices. People love the corner slices on Detroit-style pizzas so much, the aforementioned Jet’s has a Detroit-style pizza where all eight slices are corners. Regardless of slicing, I like to eat the rest of an individual slice before digging into the corner for an epic finale. I ate a bunch of corners as research for this review, and they were lovely. Like the crust generally, they were not as thick as they should have been, but I enjoyed them all the same.

I also tried both leftover pizzas the next day. The cheese was particularly nice.

So, is it worth the $10? I would say yes. Pizza Hut’s classic value range is from $5 to $7.69, but a Detroit, because of how it is built, is significantly more filling. I can usually polish off a value pizza all by myself in one sitting, but I could not do that here.

How authentic is it? Parts of the pizzas really nail the style, but others do not. I don’t really want to give Pizza Hut a hard time about how the base was not thick enough or the crust was not tall enough, since I suspect that’s from trying to make this pizza on an industrial scale.

I’ve been thinking about it, and does everything need to be absolutely perfect for it to be worth it? No, of course not. No one needs an exact facsimile. The pizzas tasted good, and they made me happy. That is all any of us really need from our end-of-week takeaway.