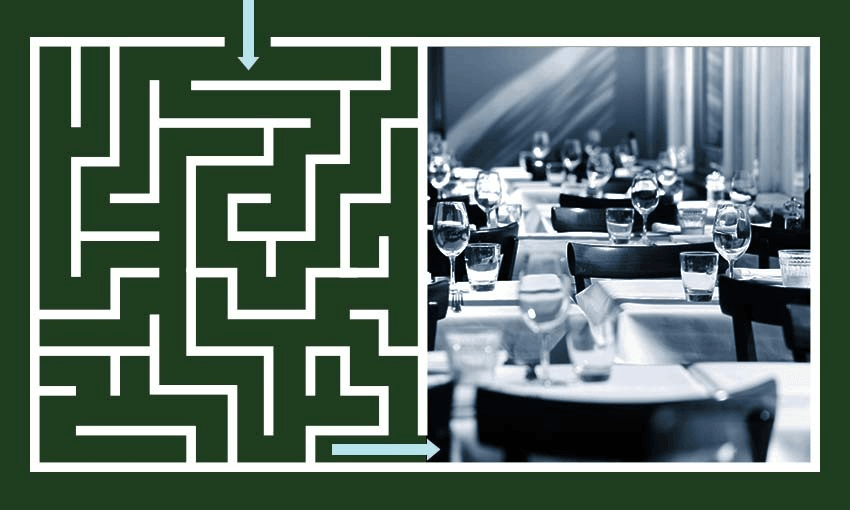 Some of us have always been excluded from dining out

While some are criticising the vaccine pass system because it restricts unvaccinated people from dining in restaurants, one group has always faced hurdles when grabbing a bite to eat – those with disabilities.

Disability is a far-reaching term. In New Zealand, around 24% of our population has some form of disability, whether that be through a physical, sensory, learning, mental health or other impairment.

As we settle into the traffic light system, being unable to dine out has become a focal point for critics of vaccine passes. But many people with disabilities have long dealt with barriers when eating out.

Dunedin-based professional speaker and writer Julie Woods has been blind for 24 years. Dining out has always been an important part of her social life, so when she went blind in her 30s, she approached the myriad obstacles in restaurant and cafe settings with determination.

“It can be anxious walking into a space that you can’t see,” she says. “I just commit to it. And then once I’ve committed to it, I proceed with the faith that everything’s going to work perfectly and it’s all going to be fine.”

For people who are blind, “the main barrier when dining out is access to the print menu”, says Woods. If your date or someone at the table is sighted, that’s helpful, “but it’s much better if we can access it independently”. And despite Woods’ attempts to get more local eateries to make braille versions of their menus, uptake has been sluggish, which she says can feel discouraging. “When I went blind I didn’t feel worthy of access because clearly I was a problem,” she says. “I was too much trouble to provide things for in an accessible format.”

Attracting the attention of waitstaff can be a challenge too when you can’t see. Sometimes Woods will “resort to ringing them at the restaurant and saying ‘we’re a table, and we need help’”. Beyond that, transport to the location, portion sizes, knowing where food is on your plate and the (hopefully fleeting) trend of deconstructed and precariously stacked meals can be anxiety-inducing too. Woods recently had an egg topple off its perch upon a towering breakfast and onto her shoe.

Access Alliance manager and NZSL interpreter Taryn Banks explains that when it comes to accessibility, the range of features that make eateries inaccessible vary wildly, from the built environment to sensory elements like ambient noise, large crowds and lighting.

“Once you’re walking alongside or behind people with lived experience of disabilities, you start to see the world through their eyes,” she says.

As things are currently in New Zealand, the ability to go out, socialise and eat together is limited for many people with disabilities.

Banks notes that this is largely by design. While nobody chooses to have an access need, “it is a choice that parts of society made to not make their doorway, their information, their consumer offering, their employment policy inclusive for you”.

To make the country more accessible, the Access Alliance, which advocates for disabled people and others with access needs like seniors, neurodiverse people or parents of young children who use prams, is campaigning for a legislative framework that removes and prevents barriers, a barrier notification system, accessibility standards and an independent regulator.

Woods reckons hospitality staff are mostly pretty good at doing what they can to make things more accessible. And it can be as simple as saying where a wine glass is when putting it down on the table, addressing customers by name or patiently explaining what cakes and quiches are in the cabinet. It wouldn’t take much for hospitality to be more accessible – in fact, it’s in the name. “It would be playing to their strengths,” Woods says.

As a child, Carvalho had “no disability, no health issues”. She was 19 when she went to hospital with flu-like symptoms and within 48 hours her body was totally paralysed. “The doctors had no idea what it was,” she says. “I had transverse myelitis caused by lupus transverse myelitis” – a rare disease with just over 100 cases described in medical literature, she says. Her legs and core didn’t recover and she now uses a wheelchair. “So I like to frame it that I am a very special and very rare person.

“From day one when I sat in the chair, I noticed that I was still the same person,” Carvalho says. “And it was like, ‘OK, so how come I lost so many rights that I took for granted, just because I can no longer walk?’”

For Carvalho, it was a natural step to become a disability advocate, “because you have to, especially having the experience of living life without disability”, she says. “I know we deserve better.”

As a wheelchair user, Carvalho frequently faces barriers in the realm of hospitality – tables that are too close together, tightly packed seating, stairs, uneven floors, a lack of accessible bathrooms or carparks nearby. All of these potential obstacles mean dining out is rarely spontaneous, and always involves forward-planning. “You always have to prepare and research, it’s not like I’m just gonna go to this place,” she says.

Recently Carvalho, keen to go to a singles night at a bar, emailed the venue to check whether or not the space was wheelchair friendly. The staff wrote back that it wasn’t, without any attempts to accommodate Carvalho’s needs.

“We spend a lot of time just doing the extra mahi just because the world was not designed for everyone. And it’s tiring.”

For many unvaccinated people, this will be the first time in their lives they’ve encountered such barriers.

Carvalho says unvaccinated people are making a decision that those with disabilities are not afforded. “I acknowledge what people that have not been vaccinated are going through, and I feel the pain.” But, she says, unlike people with disabilities, “they do have a choice”.

More than that, they are putting other people at risk. Immunocompromised people, such as Carvalho, as well as the elderly and children who can’t be vaccinated, are living in a world that has become much more dangerous for them. Vaccine passes offer some security for Carvalho – without them, she wouldn’t dine out, she says, as she wouldn’t feel safe.

Woods points out that it’s not only in hospitality settings that people with disabilities face obstacles. “We have barriers everywhere,” she says – on the street, in the home, in schools, and even in outdoor spaces like parks and beaches.

“We didn’t have the luxury of that [easy access] to start with. They have it and they’re throwing it away,” Woods says.

For Banks, who has severe asthma, our freedoms always exist in relation to those of others.

“I do totally respect people’s decision to not get vaccinated, however, all decisions have consequences and the consequences of that decision at the moment is that they can’t go and be in those social environments,” she says. “So now it comes down to my right to protect myself as a vulnerable person – is that less important than your right to freedom of choice?”