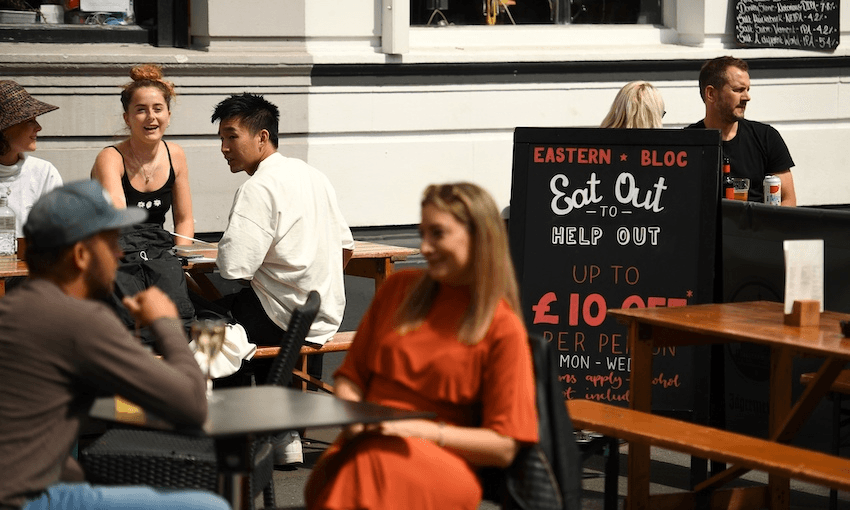 Diners sit near a sign promoting the British government’s ‘Eat out to Help out’ scheme to get consumers spending again after lockdown, in Manchester, August 2020 (Photo: OLI SCARFF/AFP via Getty Images)

Diners sit near a sign promoting the British government’s ‘Eat out to Help out’ scheme to get consumers spending again after lockdown, in Manchester, August 2020 (Photo: OLI SCARFF/AFP via Getty Images)

Dining out vouchers and subsidies to help restaurants and cafes bounce back from Covid-19 restrictions have been proposed by industry bodies and the opposition. But similar schemes implemented overseas haven’t always run smoothly, explains Charlotte Muru-Lanning.

It’s clear that the hospitality industry is severely impacted by lockdowns, and the wider consequences of Covid-19. According to Restaurant Association of New Zealand data for September, Auckland hospitality businesses experienced a 78% decline in revenue compared to last year. And the country as a whole is down 56%.

As part of an eight-point “roadmap” to help the industry, the Restaurant Association of New Zealand is calling for government-funded dining vouchers. The proposed scheme, which would cost the government $300 million, would work out to around $20-$25 for every New Zealand resident over the age of 18.

The National Party has called for a similar scheme as part of its new economic plan, announced earlier in the week. The plan, dubbed “Back in Business” would include giving every vaccinated adult a $100 voucher to be used at hospitality or tourism venues nationwide.

Restaurant Association chief executive Marisa Bidois says businesses currently operating under level three restrictions have had it particularly tough, but members in level two areas say they’re struggling too. “The public has been a bit slower to come out again,” she says. “There’s a bit more diner hesitancy around the country.”

The voucher scheme is designed as a counter to this hesitancy, and to help the industry get back on its feet when restaurants are able to safely open up again, she says.

The association has looked to similar schemes in New South Wales and the UK for inspiration.

While the New South Wales scheme, which began in March this year, has attracted little criticism so far, the same can’t be said of the UK scheme.

Called “Eat out to Help Out”, it was implemented in August last year. During that month the government offered diners up to a 50% discount on meals between Monday and Wednesdays. It was designed to kick-start the economy and to coax people out of their homes to spend after months of lockdown.

The scheme was reportedly popular among businesses and customers alike. However, research since has suggested the discount scheme helped spread the virus, and may have contributed to a second wave of infections. Thiemo Fetzer, a professor of economics who published the study, said: “The Eat-Out-to-Help-out scheme, hailed as an economic cure for the ailing sector, may have substantially worsened the disease.”

According to the research, between 8% and 17% of newly detected Covid-19 clusters were linked to the scheme during that period. The research found areas with high uptake of the vouchers saw an increase in new infections around a week after it began.

Those same areas saw a decline in new infections a week after the scheme was finished, the study found.

Although Britain’s finance ministry rejected the findings of the study, prime minister Boris Johnson later conceded that it may have impacted infection rates.

Bidois says the scheme proposed locally would have significant differences to that in the UK, which would lessen the risk of similar outbreaks. “We’re in a unique position where we can learn from some of the stuff that happened in the UK and say, ‘Right, well, we know this didn’t work and we know that didn’t work,’” she says.

The first of these differences is that the UK scheme operated before any vaccine rollout had begun. New Zealand, as we all know, has begun our rollout. While vaccines don’t offer us full protection against outbreaks, especially as children under 12 can’t get vaccinated, there is clear evidence that they reduce transmission and hospitalisations.

Vaccine mandates, mask mandates and enhanced government leave support schemes for staff who are symptomatic or have had potential contact with Covid-19 could all be helpful approaches to mitigate this risk to customers and staff, Marisa says.

She adds, “With any change it needs to be carefully considered so that we can balance reducing the spread of Covid whilst also ensuring businesses are able to plan and stay operational, as much as possible”.

Another difference, says Bidois, is that “we have quite restrictive measures that are put in place within our businesses”. There are restrictions around spacing between tables and the numbers of customers that can be in each hospitality venue. “The UK’s measures certainly are not as tight as the New Zealand regulations around dining,” she says.

The scheme proposed by the Restaurant Association also wouldn’t have the tightly bound timeframe that was built into the UK scheme. Bidois says they’re proposing the scheme “be spread over a year” to “limit people descending on hospitality within one month”.

In addition to direct financial assistance to businesses, Bidois says the particular benefit of a voucher scheme relates to the impact eating out has on the wellbeing of customers.

While much of the criticism has stemmed from the idea that the economic gains of the UK scheme came at the expense of rising infections and strain on their health system, there was also some criticism of the economic impacts.

The report found no knock-on benefits to other businesses from people taking advantage of the scheme.

In the UK, a massive portion of the government funds went to large chain restaurants too. Official figures showed more than nine in 10 discount claims were made by businesses with just one participating outlet, although between them these venues claimed only 52% of the total discount. This means large chains like Burger King, Mcdonald’s and Nando’s received larger amounts of money than smaller businesses.

Bidois says that while chains aren’t undeserving of this assistance, the association’s plan to create a register “would ensure that we could have a good cross section of the businesses as part of the plan as well”.

“We want to make sure that our local cafe down the road is equally as supported as one of our larger, fast food chains,” she says.