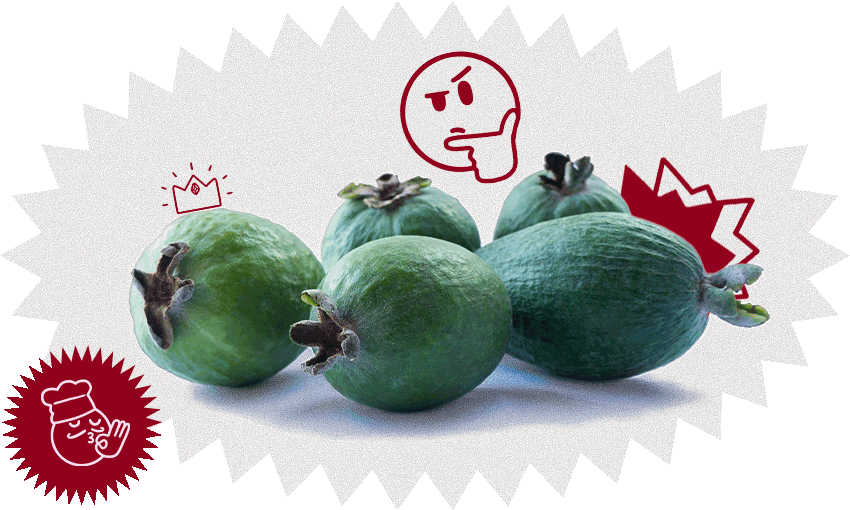 Do you have an overabundance of feijoas? Are you getting kind of sick of them? Here are 13 ideas to see you through to the end of the season.

When the first feijoas arrive in early autumn, they’re widely coveted. By the end of April, however, our relationship with feijoas has usually soured. Through the fault of absolutely no one, the cheers of early March turn to whimpers of dread each time one of the gritty ovoid fruits thuds to the ground, clogging gutters, rotting into lawns, browning in fruit bowls and tempting pests. The slope of my street means the unwanted dropped fruit from the trees along the berm become ACC claims waiting to happen on my walks to and from work each day. Things are tense at this time of the year.

If your glut of feijoas is starting to feel more burdensome than beloved, you may just be in need of a little inspiration. So, here are 13 things you can do with your feijoas (beyond chutneys and jams) to save them from the compost heap.

Check to see you have a special feijoa in your possession

Firstly, and most importantly, go through your pile and identify any uncanny feijoas in the mix. Does one have a divot that makes it look like a heart? A bulbous half which means your feijoa resembles a native bird? An extremely slender fruit? A very chunky one? These ones can be popped straight on Trade Me – you might make a couple of bucks, and someone’s day.

The seasonality of feijoas is our cruel yearly reminder that absence really does make the heart grow fonder. My own experience tells me that while you might not feel like eating them right now, you’ll definitely want feijoas the minute you can’t have them any more. They’re heartbreakers like that. So, freeze a resealable bag or two in anticipation of those moments. You might be dubious now, but when you’re craving a little taste of the uniquely tart fruit in November, you’ll absolutely thank your past self.

There’s a whole social structure behind feijoa season and it’s immensely communal. In that spirit, park a box or bucket of them out the front of your letterbox. Or, alert people to your overabundance on Facebook marketplace or community pages – it’s highly likely someone will be over to helpfully swipe a bag or two from your garden.

If you’ve still got some left after that, try some of these:

This is essentially stewed feijoas but I’ve always been enchanted by the way my grandma would describe it as “feijoa stew”, as if it were a fruit casserole – so I’ll forever refer to it as such. Simply scoop the flesh from your feijoas into a pot, add a little water and simmer with the lid on for about half an hour or until the fruit looks relatively amalgamated. You can add a stick of cinnamon or some brown sugar while it cooks, but it’s not necessary. Eat warm by the bowlful with a dollop of ice cream or clotted cream, or atop porridge.

This is a wonderful way to use frozen feijoa slices, but you can just as happily use fresh chunks. Add in place of or alongside whatever fruits you’d normally pop in the blender. This recipe for feijoa, basil and ginger smoothie by Emma Boyd is an excellent way to use up the fruit and get a boost of fibre and vitamin C while you do it.

We may be half a year away from peak trifle season but there’s no law that says you can’t make one before then. And there’s certainly no regulation that says you can’t use feijoas in your trifle, even if it is a little unconventional. Use stewed and raw feijoa in place of the fruit or jams you’d usually include in a trifle and assemble as normal with copious sponge, custard and cream. Even better, feijoas are lovely paired with nuts – so finish off with a scatter of chopped pecans, walnuts or hazelnuts.

The distinctive taste of feijoa means they make for an excellent hero ingredient in cocktails. Start by making a feijoa syrup and mix away. A rum based cocktail like a caipirinha would work especially well with feijoas, but personally I’d opt for a feijoa sour: Add 2 parts whiskey, 1 part lemon juice, 1 part feijoa syrup and ½ part egg white (or aquafaba for vegans) to a shaker and dry-shake for 30 seconds without ice. Add ice and shake it up again. Strain into a glass and garnish with 3 drops of Angostura bitters.

I reckon this is one of the more innovative ways to eat feijoas, partially because circle-shaped food is always a total joy. This feijoa pikelet recipe is an excellent place to start, especially when smeared with cream to serve. I’ve also added feijoas to my favourite pancake recipes on various occasions while measuring slightly less liquids without any issue.

Whenever someone serves up roasted or poached fruit, I think: “wow, elegance”. Feijoas in this form are elegant too, and wonderfully easy. Whether you’re roasting or poaching your feijoas, roughly peel the fruits and let them bob in white wine spiked with sugar and whole spices like star anise, cloves, bay leaves and cinnamon. Cover with tinfoil or a lid and bake or cook on the stove for at least half an hour. Serve in your nicest individual bowls, or plonk in the middle of the table with a container of vanilla ice cream.

With gloomier weather ahead of us, salsa is an invocation of warmer months. And thankfully, bowls of feijoa also mean bowls of salsa. Cube feijoa and topple into a bowl with chopped tomato, cucumber, apple, coriander, mint and chilli along with some sugar and lemon or lime juice. Serve with homemade tortilla chips, alongside tacos or make ahead to take with you for an easy work lunch.

It’s rare to find the mighty feijoa outside of the dessert category, but they can make a wonderful accompaniment to meat dishes – pork especially. Just add in place of apples to your pork casserole or as a warm compote on the side of your pork chops.

One can only eat so many feijoa crumbles, so it’s entirely understandable if you want to say “enough’s enough” at this point. However, we all know that the feijoa lends itself especially well to the crumble form, so it’s worth making one if you’re not already crumbled-out. Spice things up with this feijoa, ginger and cashew crumble or make a crumble medley by pairing your feijoas with other seasonal fruits like apples and pears.

No matter what you make with your feijoas, you’ll likely amass piles of feijoa skins. By all means, put them into the compost and call it a day. But they’re also the main ingredient in feijoa fizz, an extremely slurpable drink made effervescent by the natural yeasts that live on feijoa skins. All you need is a large jar, water, sugar and some of those green skins, and you’re away.