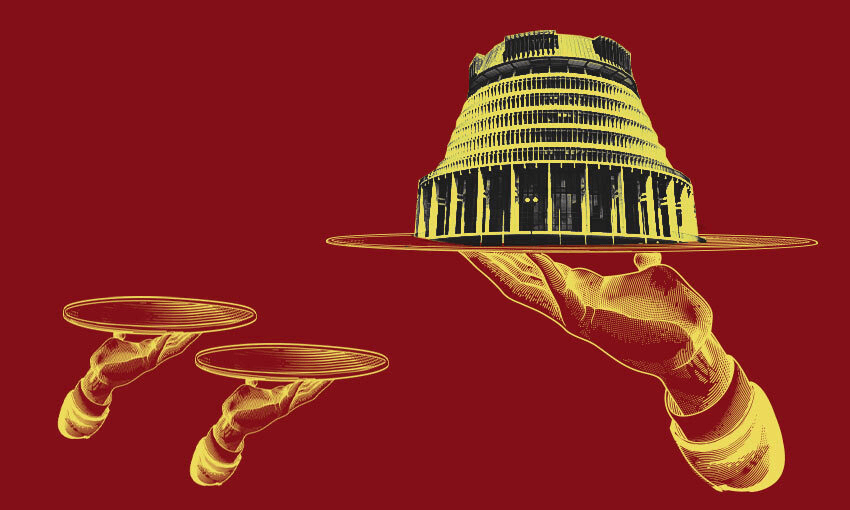 In light of ongoing food insecurity in Aotearoa, a situation that was drastically exacerbated by coronavirus-induced lockdown conditions, the recent call to “feed the five million first” is refreshing. However, the tagline “before exporting New Zealand food” not only fails to tell the whole story but obscures the crux of the matter: hunger in Aotearoa isn’t a result of food unavailability, but inaccessibility, and the central issue is therefore a lack of political will to address the issue, not food.

Of course, the vast quantity of agricultural production exported – at least 95% – plays a role in household as well as national food security. The higher price of food compared to, for example, Aotearoa’s neighbour, Australia, is in part due to high food exports simply because there’s less food available, and, together with controls over imports and farm consolidation, such high exports also deprive people of choice.

The food remaining in the country has also been placed under scrutiny. Last year, there was public backlash against the selling of second-grade produce to Aotearoa citizens, an accusation that was subsequently denied by fruit, vegetable and meat businesses. But, because such businesses receive high prices abroad, domestic markets are simply not a priority. This situation is then compounded by the fact that many food imports are of a poorer dietary quality compared to those exported.

In addition, the climate crisis is set to have a massive impact on food production and security. However, resulting food shortages should not be a looming eventuality for Aotearoa. This is because, despite the immense amount of food exported, there is currently enough food in the country to feed everyone. In fact, the country is such a land of plenty that Love Food Hate Waste estimates Kiwi households throw out just under 160,000 tonnes of food a year. And this figure doesn’t take into account the amount of food lost further up the food chain, including the surplus food dumped – or conveniently channelled into food banks – by supermarkets.

Ultimately, there is no resource-based reason for hunger to exist: hunger in Aotearoa is a paradox of plenty. Therefore, the problem is not a lack of food, but a lack of access, which, in a capitalist society, equates to a lack of access to money, ie having an income sufficient enough to be able to purchase adequate food and/or the resources to grow it.

However, food access does not simply equate to money: it is also impacted by structural inequalities. Social, economic and political barriers to access exist due to systemic discrimination. Systemic racism is a particularly stark example in Aotearoa: the stratification of hunger across racial lines coexists with the wealth gap between Pākehā and Māori, and the discriminatory impacts of colonisation add further obstacles to the ability of Māori to access food. Systemic discrimination is also experienced by other marginalised groups, including indigenous peoples of the Pacific Islands, women, the elderly, those with disabilities, and the LGBTQIA+ community. Combined with hunger and poverty, such discrimination further impacts people’s access to food by reducing their access to adequate pay, resources, and opportunities.

As a high-income country, access to food should be guaranteed in Aotearoa, especially in light of the fact that, in 1978, the state ratified the International Covenant on Economic, Social and Cultural Rights and thereby recognised food as a human right. The government therefore has an obligation to ensure that conditions are in place in which everyone in Aotearoa can feed themselves with dignity.

This commitment has clearly not been upheld. Instead, successive governments have sought to normalise the existence of hunger and justify inaction by failing to routinely assess how many are living in food insecurity – it’s not an issue because it isn’t measured, and it isn’t measured because it doesn’t want to be regarded as an issue – and by perpetuating the false beliefs that domestic hunger is being addressed via free food in the form of school meal programmes and food banks, and that food poverty is primarily the fault of the individual, thereby dismissing the structural obstacles many face.

In today’s new normal, it is understandable why national food self-sufficiency has become a dominant issue in Aotearoa. But it is important that national and household food security are not regarded as synonymous. Domestic hunger won’t be fixed by more food, but more political will to fully acknowledge the severity and complexity of the issue and take effective action to address its economic and historical systemic causes.

Katharine Cresswell Riol is a PhD candidate at the University of Otago, specialising in social justice, food poverty and the human right to adequate food.