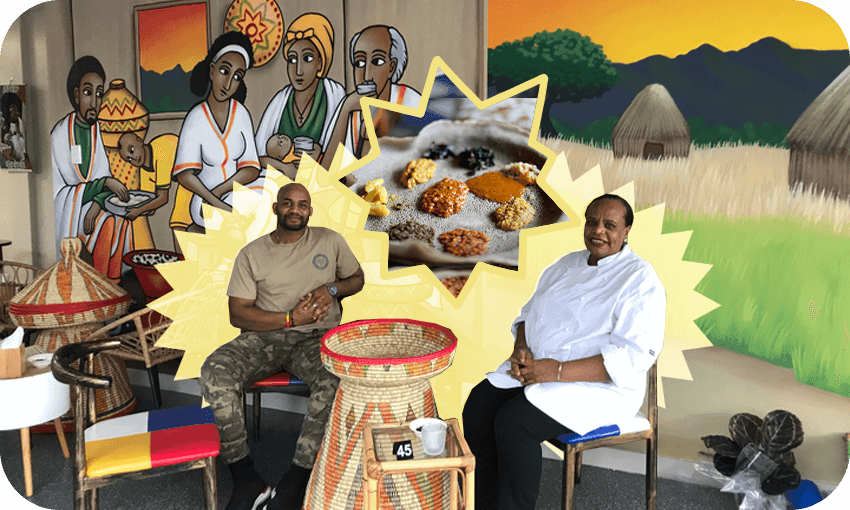 For the last two years Auckland has been without a standalone Ethiopian eatery. Charlotte Muru-Lanning talks to the owners of a new restaurant that’s filling the gap.

Injera is the spongy, sour flatbread that’s core to Ethiopian cuisine. Made of teff, the tiniest grain in the world, injera is formed into discs to line dining trays over which thick spiced stews are spooned. During the course of the meal, the porous bread is used both as an eating utensil and to soak up juices from the meal.

“Even though it’s food, the word injera can also mean my place, my country, my love,” says Fetehalow Zomo who, alongside business partner and chef Fantaye Aga, recently opened Auckland’s newest (and only) Ethiopian restaurant, Gojo.

Despite the majority of New Zealand’s Ethiopian population living in Auckland, the city has been without a standalone Ethiopian restaurant since 2020, when Cafe Abyssinia closed after seven years in operation. Zomo and Aga, who met at church, had dreamed of opening a restaurant for years. They’d catered markets, festivals and events, but it was only when they realised the city was without a single Ethiopian restaurant they decided to fill the gap.

Nestled in a quiet street off the main New Lynn drag, Gojo has been brought to life by the co-owners with bold murals, messob (woven tables) and charmingly-retro looking tables and chairs. They chose the area because of its proximity to their own community, and as a bonus, it’s handy for Aga who lives just down the road.

The pair hope to invoke a sense of home through their food. “I’ve had people who are Ethiopian who have eaten [Aga’s] food and they explain it as if they close their eyes, they feel that they’re back home,” Zomo says. “That’s how amazing she is with her cooking, she’s the boss.”

Aga arrived in New Zealand from Ethiopia, where she’d spent most of her life, in 2012. Her mother, “a beautiful cook”, taught her how to prepare traditional dishes as a young girl. She says she worked in 16 different restaurants in Ethiopia before moving to Auckland.

For Zomo, his relationship with home is more complicated. His family escaped Ethiopia during the civil war, finding their way to a refugee camp in Sudan, where he was born. In 2003, as a 12-year old, he moved with his family to Auckland, where he attended school for the first time and learnt English. Despite calling both New Zealand and Ethiopia home, he’s never been to Ethiopia, the place he describes as his “motherland”.

“I used to have a lot of things against Ethiopia,” he says. “I guess because I didn’t get to experience a lot of things that a lot of kids usually do. I’ve never seen my grandparents, uncles and cousins and things like that, never experienced that.” Now, almost 20 years later, he has plans to visit when he can. “Despite what happened,” he says, “that’s where my roots are, I still have love for the country.” The food of Ethiopia that he grew up eating in his family home has become a vital link to where he’s from. “Expressing the culture within our food, that brings a lot of connection,” he says.

At Gojo, the menu features injera, of course, along with 14 other staples of Ethiopian cuisine, like doro wat, a chicken stew with a boiled egg hidden within a sauce tinged red by a fiery spice blend called berbere. And gomen besega, a comforting mix of cooked kale, spinach and beef brisket spiked with butter, onions and garlic. Then there’s kitfo, which Zomo says is a dish that “almost every Ethiopian that comes in is looking for”. Kifto is beef mince, either cooked or tartare, infused with homemade butter and a mix of mitmita (an Ethiopian spice blend). While traditionally a dish served only on special occasions, kifto is a regular menu item at Gojo.

The restaurant also offers a number of vegan dishes which are integral to both Ethiopian cuisine and culture. Nearly half of the Ethiopian population are Orthodox Christians who fast on Wednesdays and Fridays – “fasting” in this context meaning not consuming any animal products. Essential dishes like misir wat, a stew of red lentils and tomatoes steeped in spiced butter and berbere, or timatim fitfit, a cooling salad of tomato and green chilli, spices and olive oil piled onto injera are products of this long-standing religious ritual and mainstays of Gojo’s menu.

Authenticity can be a challenge when you’re far from the place where vital ingredients are plentiful. Still, Gojo is dedicated to maintaining Ethiopian culinary traditions. Aga makes everything in house, no matter how time-consuming or difficult. Before the restaurant opens for the evening you can find her hard at work making niter kibbeh, a spice-infused clarified butter used to flavour dishes; ayib, a fresh cottage-cheese style cheese; birb, a honey drink; and keneto, a drink made from barley lemon, orange, cinnamon and honey. Gojo also offers a traditional coffee roasted in house and served by the cup or in a pot called jebena. Leaves from the tena’adam shrub, an aromatic plant grown in the highlands of Ethiopia, are served on the side. Zomo would love to see jebena buna, the customary Ethiopian coffee ritual – it involves the roasting, brewing and (slow) drinking of many cups of coffee while discussing the issues of the day –  become more popular in New Zealand. It’s about “coming together, being present,” Zomo says.

It’s these kinds of details, and the work required to produce them, that underscores the pair’s desire to hold true to the food of their home, and to share that with others. “Ethiopians are proud [and] we love our culture,” says Zomo. “We want people to come in and go OK, this is what Ethiopia looks like, this is what Ethiopia tastes like.”