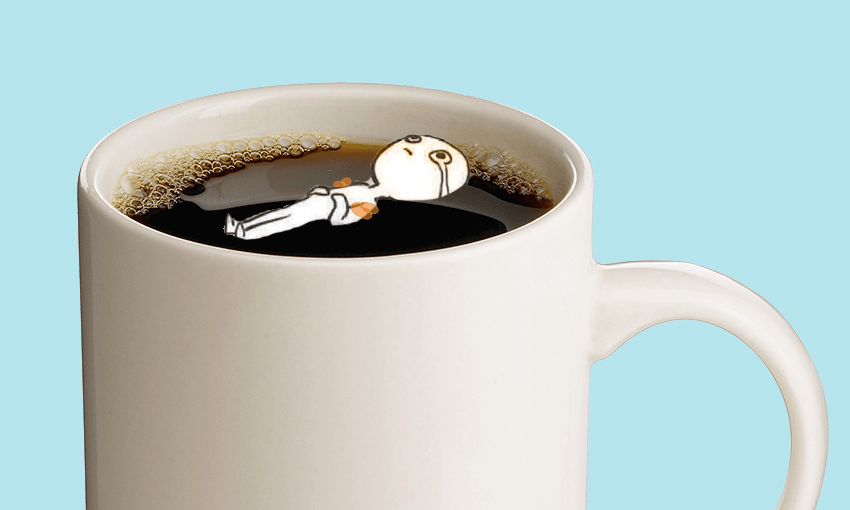 On a recent Sunday afternoon, Sam Low made a cup of coffee. In one hand, he held a white coffee cup recently filled with a double-shot of freshly ground Brazilian coffee beans containing plum and blackcurrant notes. In the other was a metal jug full of thick, creamy milk. Clearly, this wasn’t going to be any normal cup of lockdown Joe.

Low smiled, then began pouring, his skilled hands spooling out luscious glugs of silky milk to make the kind of award-winning latte art that takes years to perfect. Like magic, a beautiful white flower appeared out of the caramel-coloured coffee ether. The 29-year-old posted a video of his creation to Instagram, added Lauryn Hill’s song ‘Lost Ones’, then wrote, “Just making a flat white during lockdown at home. Pouring a basic 6 tier tulip latteart (sic)” like it was nothing.

“Torture” is the only word that adequately describes Low’s video. I must have watched his brutal clip a dozen times, and I hate it more with every viewing. Since New Zealand went into a level four lockdown two weeks ago, a decent double-shot flat white, the country’s most popular style of coffee, has been nothing but a distant memory. Low’s clip is an instant reminder of a faded dream.

Cafes are shut, everyone’s stuck at home, and while you can mask up to gather your groceries and other essential items, no one’s allowed to go get their daily caffeine fix. As a result, there are a lot of caffeine lovers suffering through headaches around the country right now. “Holy fuck that’s great,” wrote one parched coffee drinker under Low’s video. Holy fuck indeed.

This desperation has translated into some truly terrible coffee skills being unveiled. I asked The Spinoff staff how they were coping with the great flat white drought, and the answer is: not well. One said her dad had been delivering undrinkable cups of coffee directly to her desk. Another said he’d given up and was using chewable coffee tablets – an “anytime caffeine hit” – to get through his day.

A third said he’d used two different flavoured Nespresso coffee pods that morning to make his first cup, but couldn’t find sugar, so stirred through a tablespoon of golden syrup. He later messaged to offer a correction: he’d accidentally re-used old pods that should have been in the bin. “I promise you I am cultured and refined in other ways!” he wrote, defensively.

In short, like everyone else, we’re suffering. Low’s video is hard to watch because a decent flat white is the one thing we coffee drinkers can’t have right now. But there’s a twist to this story that his Instagram video doesn’t reveal: Low didn’t drink his expertly brewed flat white. It wasn’t even for him. He’d made it for one of his fortunate Sandringham flatmates.

Low, it turns out, doesn’t drink flat whites. Like many aficionados, he doesn’t have any milk in his coffee. If he’s making a flat white, it’s for someone else to enjoy. “My housemates are very lucky,” he admits. Luck doesn’t even begin to cover it.

It’s only 9.30am when The Spinoff calls, but Low’s already downed two double-shot espressos to start his day. “I’m actually craving my next one, to be honest,” he says. Waiting in his kitchen are 12 different blends of roasted beans, chosen depending on his mood. When he travels, he packs his own beans and filters, plus a hand grinder.

Low readily admits he’s an addict, but he’s also an expert. Low is an award-winning barista and coffee trainer with 12 years of industry experience. He loves drinking the stuff too: “In lockdown, I’m averaging about four (cups a day),” he says. He owns a flash DeLonghi home coffee machine, the result of a recent brand partnership, and always drinks it black. “I’m a bit of a purist,” says Low. “In the mornings, I drink espressos and long blacks. In the afternoon I have filter coffee.”

Low’s been this way since a single cup of coffee changed his life. As an apprentice chef, he decided to switch careers to coffee. Someone poured him a single origin brew that blew his mind open. “It was that first moment of having a coffee that didn’t taste like coffee,”says Low. It was an Ethiopian blend from the famed, elevated, central southern region of Yirgacheffe. “It tasted like tea and it tasted like jasmine and it tasted like orange,” he says. “I was just like, ‘Whoa – coffee can taste like this?’”

He knows he’s a nerd about it. During our half-hour conversation, Low talks about water temperatures, coffee weight, grind size, timings and pressure. He uses the phrase “coffee solubles” and reveals he used to attend “latte art throwdowns” – a sort-of rap battle for baristas. This devotion to his craft has led to good things: he’s a two-time New Zealand latte art champion, won a barista of the year title, was ranked in the top six in the world, and has trained baristas in Melbourne, Canada, and at home in New Zealand.

He also knows a thing or two about food, garnering notoriety for re-plating his MIQ meals while isolating on his return from a stint in Melbourne last year. Lately, he’s been entertaining his 13,000 Instagram followers with drool-some home-cooked lockdown creations, like a ‘Belles, Bored & Boujee’ fried chicken sandwich, and soy-braised pork shoulder.

But food’s not why we’re here. We’ve come to Lowe for coffee advice. He’s got some, but you might not like it. If you’re a coffee fan and you’re craving a lockdown caffeine hit, Low has something huge to say. Here goes: it’s time to give up the milk. “A lot of people get fixated on the milk,” he says. He knows this is controversial.

Instead, Low’s all about the beans. The issue he’s most passionate about is ridding the world of poorly roasted coffee. “Bad quality cheap supermarket coffee beans … are on sale for a reason,” he says. “Ultimately you’re buying the worst of the products … and then you’ll blame (your bad coffee) on skills. If you have bad ingredients to start off with, you’re not going to be able to produce anything of quality.”

His solution? Jump on Google, search for “specialty coffee” and find a local roaster you like. From there, Low says, you can’t go wrong. Whether you’ve got a basic kitchen plunger, a Chemex filtration system or a flash coffee machine like his, just grind your beans fresh, boil some water and get into it. “All brewing methods are great,” he says.

If you’re determined to perfect putting silky white tulips on top of your double-shot, you’ll need a professional coffee maker with a steam wand. Once you’ve got one of those, Low says your best bet is hitting up YouTube for video tutorials.

Low also has a word of warning: when we finally get out of lockdown, consumers should stop thinking of coffee as a cheap commodity. It’s an experience, one Low says is far too cheap. “People are like, ‘It should be $4,'” he says. “It’s been $4 for the past 10 years.” That, he says, is not sustainable. “Everything else has gone up twice that … which is why it’s so important to support specialty roasters. Then you’re not helping the monsters.”