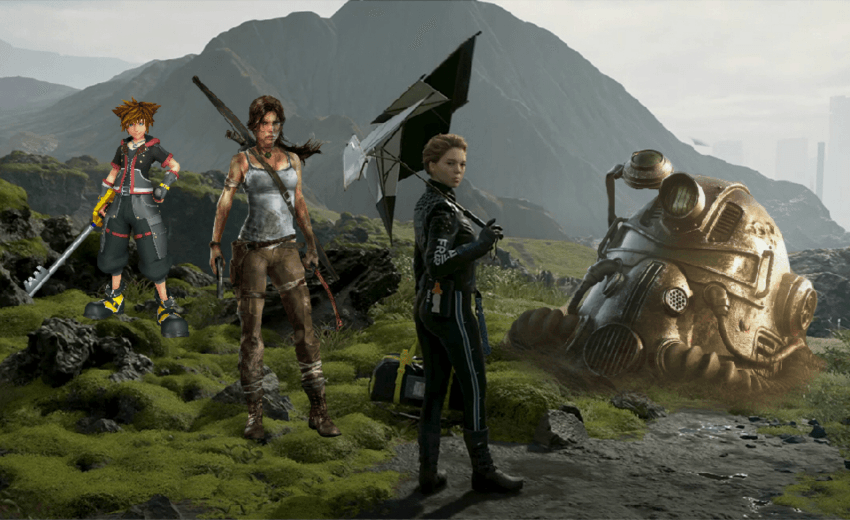 What happened at E3: a very quickfire round up

E3 is a whirlwind of press conferences, trailers and gamer reactions, and so much happens that it’s almost impossible to keep up with it all. Sam Brooks has your essential E3 cheat sheet.

If you’re deep in a certain part of the internet, your social media feed right now is probably a maelstrom of E3 reaction videos, hot takes and Twitter threads about the scores of trailers and hundreds of announcements that came out of this week’s event, properly known as the Electronic Entertainment Expo 2018.

So I’ve sifted through the articles, the trailers and the online controversies to provide a (mildly snarky) round-up of what was announced at E3. Aren’t you lucky that I do these things so you don’t have to?

(Note: Many of these games are cross-platform, so I’ve arranged the announcements into what press conference they came up in or where I thought they looked best. If this offends you, I do not apologise. Please find something significant to be offended by.)

The Last of Us 2: Super violent trailer, a gay kiss, Ellie looks less like Ellen Page, still has to fight for survival.

Ghost of Tsushima: New game from the studio behind InFamous, set in Japan during the Mongol Invasion, it’s swords, stealth and open-world. No release date.

Death Stranding: Lea Seydoux, baby fetuses, a de-aged Lindsay Wagner, still have no idea what’s going on with it.

Tetris Effect: Tetris but in VR, which sounds scarier than any other kind of game I can imagine.

Control: Spooky as hell looking game from the people who brought us Quantic Break, telekinesis, gunplay, maybe set in space?

The Awesome Adventures of Captain Spirit: Free game from the makers of Life is Strange, set in the same world, seems to be aimed at kids.

Black Desert Online: Korean MMORPG makes it way to the West finally, and on consoles. Open world, will steal all your waking hours, usual MMORPG jazz.

We Happy Few: Narrative adventure game set in a drug-fueled, retrofuturistic 1960s England. Can only hope that Marianne Faithfull stars.

Cyperpunk 2077: New game from the people who stole your life with The Witcher 3, based on the popular tabletop game. Narrative-driven, open-world RPG, first-person, character creation, one of the most anticipated games of… forever, really.

Dying Light 2: Sequel to the survival horror phenomenon, Chris Avellone and some of The Witcher 3 writers are writing on it, probably has zombies in it.

Session: Tony Hawk Skateboarding without Tony Hawk. Also, from the media release: “an incredible sport where there are no other goals than expressing your creativity and achieving success through hard work, perserverance and bits of madness for no one else other than yourself.”

Gears 5: Play as a historically accurate woman in the new games in the little known Gears franchise, shoot up a tonne of aliens and take cover a lot.

Gears Pop!: Mobile game in the Gears franchise, in ‘Funko Pop’ style. (I have no idea what that means.)

Gears Tactics: The Gears franchise takes a bold step into the XCOM territory, and also the first Gears game specifically made for those under-catered for and underprivileged PC gamers.

Halo Infinite: Master Chef returns to cook up more things in the infinite entry in the Halo franchise.

Devil May Cry 5: Capcom unreboots its franchise, and brings us hack-and-slash Evanescence realness once more.

Nier: Automata: Become as Gods Edition: Updated re-release of 2017’s surprise hit, and possibly the only game that requires you to have seen a theatre show in Japan to fully comprehend the plot.

Ori and The Will of The Wisps: Metroidvania platformer and puzzle, looks genuinely really cool.

Sea of Thieves: Massive Rare game gets expansion, adjusts and fixes problems that have dogged it in its first few months of release.

Sekiro: Shadows Die Twice: New game from the Dark Souls developers. A dying-a-lot-simulator, but this time set in Japan!

Tales of Vesperia: The most anticipated game of E3 if you ask me, the only person who is excited about a remaster of a ten year old RPG.

Assassin’s Creed: Odyssey: You can play as a woman or a gay in Ancient Greece.

Skull and Bones: The pirate bits of the Assassin’s Creed games get their own game!

Starlink: Battle for Atlas: Space exploration game, but you can only play as Fox if you’re playing on Nintendo Switch. Sorry, furries!

Fallout 76: The seventy-sixth game in the Fallout franchise.

Starfield: A sci-fi game from Bethesda. Set in space. Literally nothing else is known.

Anthem: BioWare action-RPG, but with no romances.

Jedi: Fallen Order: An entry in the unheralded underdog Star Wars series, set during the Fall of the Jedi, as the title suggests.

Sea of Solitude: Adventure game from EA with a genuinely cool art style.

Shadow of the Tomb Raider: It’s Tomb Raider, you know what this is. It’s a real-life archaeology simulator.

Octopath Traveller: An actual RPG. Remember when Square-Enix used to make those?

The Quiet Man: A game about a quiet man. The trailer is cryptic as hell.

Babylon’s Fall: A new game from PlatinumGames, literally nothing else is known about this except an obscure cinematic trailer. Will probably involve knocking monsters down.

Super Mario Party: Ruin your friendships and your parties with the new entry in this series.

Hitman 2: Not to be mistaken for the other Hitman 2 that came out sixteen years ago.

Metal Wolf Chaos: Cult classic from 2004 about the US President taking on the world in giant robots gets a timely re-release.

Farming Simulator 19: The clue is in the title.