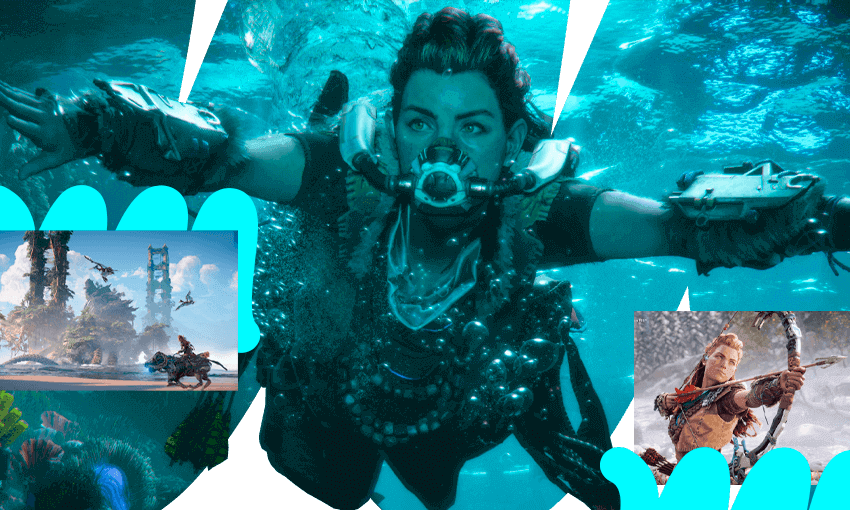 Sony’s new exclusive makes an early play for game of the year, by taking the best parts of previous games of the year, writes Sam Brooks.

Last decade, Sony took a gamble on Horizon Zero Dawn. The game, from developer Guerilla Games, whose blockbuster series Killzone died a slow, quiet death, didn’t sound like a hit. It was an open world, post-apocalyptic game, headed up by a teenage girl, with a scattered focus on combat, crafting and exploration. It should have failed.

Yet, against all odds, it was a success. Horizon Zero Dawn remains one of the best-selling and best-loved games of its generation, becoming the biggest new intellectual property for the PS4. The game wasn’t perfect, but it had a compelling setting, an engaging story, and rewarding enough gameplay loops to keep players hooked. It’s no surprise that we got a sequel.

With Horizon Forbidden West, Sony isn’t taking a gamble at all. There’s no doubt that this game is going to be a huge success, and very little doubt that it’s going to help the company move more consoles – this is the best argument for upgrading to the PS5 since launch.

Forbidden West starts shortly after the first instalment. Nora warrior Aloy has saved the world from another apocalypse, but now she has to venture west to stop complete societal collapse, again. Before long (by which I mean 10 hours in – this game is huge) things get a lot more complicated, and it’s more than just the fate of society that hangs in the balance, it’s the fate of the entire world.

This is a game that does what players expect of it, and what Sony wants from it. It is more Horizon, with better graphics, smoother gameplay and a deep enough well of things to do that you could spend months of weekends on it and still not get through it all. It is a very, very good sequel to Horizon Zero Dawn that I wager will be many people’s favourite game of the year.

The first is The Witcher 3, arguably the best and most-loved game of the last generation. Not since that game has there been an open world that is as richly dense and developed as  Horizon Forbidden West. Every little task, and there are hundreds of them, contributes to the world. The side quests can take up to half an hour each, and each of them gives more depth and texture – whether you’re bringing flowers to a man’s grave on behalf of an old flame, saving a young child from a robot dinosaur, or slinging arrows at countless ravaging monsters.

While this sounds overwhelming, and even though I’ve put close to 50 hours into this game there are still wide swathes of the map that I am yet to explore, it ends up giving the story much higher stakes. We’re invested in saving the world because it’s something we’ve put so much time and effort into already.

The flipside of this is that it’s very easy to lose track of that main story, and for the pace of the story to grind to a halt. A key character from the first game disappears for up to 10 hours at a time, and it can be difficult to maintain a solid narrative throughline. I played the game over a series of days across a couple of long weekends; I expect most people will play it in bits and pieces across a far longer period. Here, the good distracts from the great – a bunch of small things that are fun to do is much less satisfying than the depths of a smart, engrossing story. But, there are worse complaints to have about a game than too much to do.

Another thing this game shares with The Witcher 3, at least on launch, is the sheer amount of bugs and graphical quirks. The bugs are often negligible, and I imagine a day one patch will resolve many of them, but sometimes entire quests bug out and the game needs to be restarted. Bugs are expected in a game of this size, but when you’re served up something this good, even the slightest flaw looks bigger in relief and, unfortunately, the sheer amount of “slightest flaws” is disappointing.

The graphical quirks are more frequent and distracting, however. On the whole, this is the most impressive looking game on the PS5 yet. The problem is the mo-cap, which, given the dozens-strong cast, is plentiful. When it’s firing on all cylinders, Horizon Forbidden West has some of the most gorgeous and authentic facial motion capture ever, easily the closest thing to watching real human faces that I’ve seen in a game. But thanks to the game’s sheer length, it’s hard to ignore the many, many repeated expressions and motions. I saw Aloy close her eyes, look to the side, and make an identical exasperated handwave more times than a player can count. Impressive and authentic the first time, but 50 hours later, it feels like watching a community theatre actor pulling from an increasingly smaller bag of dramatic tricks.

The other game that Horizon Forbidden West hews closely to is Mass Effect 2, a near-perfect sequel to an already beloved IP. Like that game, Forbidden West builds on the strengths of its predecessor to make something even more impressive, but that’s not where the similarities end. Horizon Forbidden West also  takes a dark turn that seems to herald a more depressing third instalment – I don’t think it’s a spoiler to say that this isn’t the end of the Horizon series.

So, with all those quibbles out of the way, how does the game hold up as a standalone experience? First, the gameplay. It’s simple, but it’s an improvement on the initial game in every conceivable way. The combat feels more visceral, the exploration is much more simple, and every effort has been made to make it accessible, regardless of your gaming ability. It’s a remarkable achievement for Guerilla Games that everything in the game feels like fun; even the busywork is enjoyable, and rewarding.

But secondly, the writing is so much stronger here than it was in the first game. The dialogue is sharper (at one point Aloy and frenemy Sylens snipe at each other like old drag queens) and smarter across the board. Even better, much like Mass Effect 2, the game isn’t afraid to grapple with the often simplistic good/bad binaries of its predecessor. The ethics of revolution and tribalism are critiqued here, brilliantly – where does tradition take precedence, and where is revolution earned? Regalla, a wantonly violent tribe leader, is wisely conceived, and the gravitas that acting legend Angela Bassett lends her is earned.

Forbidden West isn’t afraid to take ideological risks either. In an age when triple-A games seem to be sawing off all their political edges – the amount of ostensibly apolitical war shooters out there would shock you – Forbidden West seems to actually want to take a stand. One of the core themes of the game is misinformation – how people interpret things for their own gain, how they fill in the gaps with assumptions and guesses, and the inevitable end point of that. It’s a stark reflection of the real world, where misinformation seems to be its own intellectual pandemic, and Forbidden West makes a case for it being as potentially dangerous as a medical one.

It’s exciting, and a relief, that Horizon Forbidden West is a great game. That it can be great while imitating two of the best games ever made is an impressive achievement, and one that’s likely to pay Sony back tenfold. But what excites me more is that a game made on a scale like this can still have soul, and even more impressively, can feel like its own thing, not just a pale imitation. Forbidden West’s reach may exceed its grasp at points but hey, that’s what patches are for.

This reviewer played Horizon Forbidden West on the PS5 and completed the main story. It is available on PS4 and PS5 now.