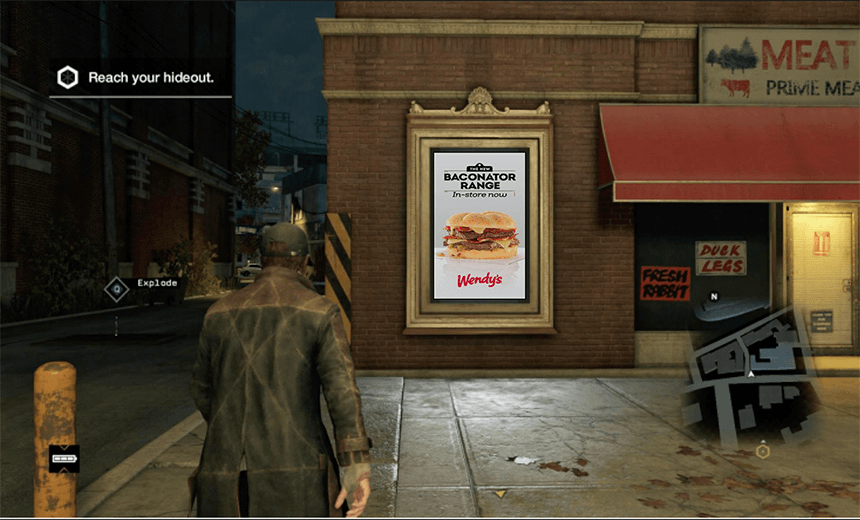 They’re putting burger ads in your games, and you can’t opt out

Not content with plastering billboards and bus stations in the real world, fast food giant Wendy’s are inserting themselves inside virtual worlds too. It’s a trend that makes Don Rowe feel nauseous.

Anyone halfway familiar with the term microtransaction is well aware that many of the entities which slither about the swamp we call the gaming industry are more than happy to leech their customers for everything they have. Like some hideous parasite they make an incision in the psyche and lap for eternity at that sweet, sweet cashflow, engorging themselves on the flawed psychological make-up of the average human.

With time their methods of cash extraction have grown more advanced. In 2006 Bethesda drew the ire of the gaming community when they released a $2.50 downloadable set of horse armour. ‘Extortion’, screamed the mob. Ten years later, and purely cosmetic Counter-Strike skins go for thousands of dollars online and DLC is reserved what used to be called expansion packs. But ethical concerns around what is essentially gambling on random skin drops and loot crates has some pundits predicting an eventual legislative crackdown.

Investors rejoice, however, because Wendy’s has discovered a way forward through this moral smog.

From this week on, real world ads promoting two variations of the Baconator burger are set to appear on billboards, bus shelters and TV screens within the virtual worlds of unspecified “popular video games”. Just like Google ads, the games are selected based on a pre-defined target audience, and the ads are served via the users’ IP address.

I don’t like it, and I put my complaints to Wendy’s. Their NZ CEO Danielle Lendich wrote back to say gaming is a highly relevant setting for the fast food brand, and that this model is a “unique opportunity and a new and exciting way to get our message across to a hard-to- reach audience.”

I say this is the latest flank of a cynical attempt to cover every inch of the universe, both digital and physical, in screaming ads.

According to Lendich, users are unable to opt-out, but hey no worries bro because the ads are ‘passive’, not like a nasty old pop-up where you have to close the ad to keep playing.

“The look and feel is also in line with the game to make it non-invasive. Many games do their utmost to create a real-world environment so you could argue that including adverts only makes these virtual worlds more authentic in a sense.”

You could argue that, but you could also that turning living people into bits of mince and brisket on camera makes a war movie more authentic too. Doesn’t mean it’s a good idea.

“They (the in-game billboards) are the same as any other billboard in the non-virtual world – a digital billboard at a rugby game for example, or a newspaper.”

Really? Or are they more like uncontrollable retrospective modifications of a product the unconsenting consumer has already paid for – modifications which may even substantially change the overall meaning of the work.

In the Wendy’s press release announcing the initiative, Lisa Ison of marketing firm Digital Commons says the ads are intentionally designed to be non-clickable “so the gameplay experience is not disrupted”.

“Brands fit naturally within the game environment, maintaining the ‘realism’ of the game and in turn increasing brand favourability with players.”

You don’t get extra credit for making the ads you’re forcing me to look at not shit. And I don’t know about you, reader, but nothing breaks my immersion in a fictional world like reminding me that out there in the real world someone is targeting me as a potential consumer.

The real way to increase brand favourability with this player would be to GTFO my games. Anything else is nauseating and greasy.