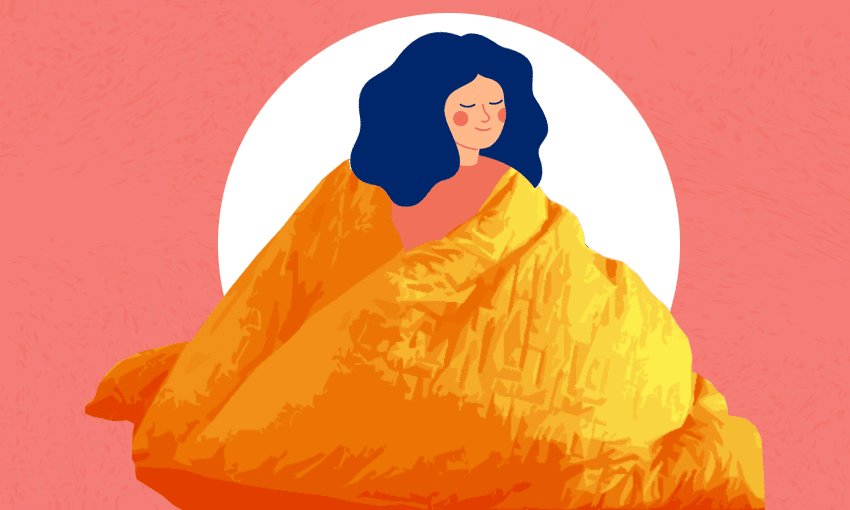 For a long time, weighted blankets were considered a specialist device. Now they’re popular with even the most normal sleepers.

Growing up, Temple Grandin spent time on her aunt’s cattle ranch in America, watching cow after stressed cow enter a squeeze chute and come out calm as the dead sea. She wondered if the same thing could work for humans, and invented the hug machine for personal use in times of stress. She would go on to become an acclaimed agricultural scientist and autistic activist, and kept using the hug machine well into her career.

Since Grandin’s invention in the 1960s, the field of deep touch pressure therapy has been the subject of several studies and become a common occupational therapy technique; it turns out feeling physical pressure can help us to shed emotional weight, at least for a moment.

On a road trip in 1997, Keith Zivalich’s daughter put a Beanie Baby on his shoulder. Its weight moulded it to his body, and he wondered what it would be like to sleep under a blanket made of such heavy beans. He had discovered a more malleable hug machine.

After some prototyping and testing of what were essentially large, flat Beanie Babies, Zivalich finally brought what we now know as weighted blankets to the world.

More than two decades on, the weighted blanket industry has grown exponentially, and the blankets themselves have gone from being a specialised therapeutic tool to a widely available – almost fashionable – consumer product. The weighted blankets made by New Zealand-based company Groundd use sustainable materials and have a soft feel. But why do we yearn for their womb-like pressure? Why does it feel good to cover ourselves under steel or glass beads, or plastic pellets, or even sand?

Deep pressure therapy was originally recommended for people on the autistic spectrum and those with ADHD or sensory processing disorders, and early feedback on Zivalich’s heavy bean blankets suggested they had especially positive effects on children with these conditions; but many current customers don’t fit into this category. The weighted boom is down to a much broader appeal.

Sarah Bowers, an occupational therapist at injury rehabilitation company Focus on Potential, said she recommends the blanket to clients as a tool to help with sleep and anxiety. Her current line of work involves working with people following a head injury or other significant accident, and she believes the touch sensation of a weighted blanket can benefit these clients.

“From my perspective, weighted blankets work by providing additional touch sensation, which helps the brain to calm from sensory overload and helps the user feel grounded with an increased sense of safety,” she said.

During Covid-19 lockdowns, our sleep cycles were often knocked off-kilter. We were sleeping too little, or too much, and the level of rest we were getting wasn’t always good enough. Bowers said that the blankets’ popularity is down to a growing awareness of how good sleep – or a lack of it – affects our mental wellbeing. “I think people are becoming more aware of their own mental health and wellness,” she said. “People are looking for non-medication tools to help them overcome sleep and anxiety difficulties.”

Alex*, a Groundd user, said the effects can be positive even for those who don’t already have sleep difficulties. “Despite never having major issues with sleep, it has definitely improved my sleep already. It feels so relaxing to wake up under, and I find myself falling to sleep quicker far more reliably than I ever have before.”

It might seem like the wrong time of year to be talking about weighted blankets. Surely sleeping through New Zealand’s wretched summer heatwaves is hard enough without 9kg of glass beads on our backs?

Thankfully, brands like Groundd are casing their weighted blankets in “eco-silk”, a breathable fibre derived from bamboo that improves temperature regulation. So no, a weighted blanket won’t give you the night sweats. They probably won’t keep you super toasty in winter either, but that’s a problem more easily solved than sweating your skin off.

General guidelines are that a weighted blanket should be roughly 10% of your body weight; so if you’re between 50kg and 70kg, your blanket should be about 7kg. They’re heavy to lug around, but if you’re working from home it might be worth dragging the blanket off your bed and into the living room office.

The same deep-touch pressure that eases you into sleep can ease waking anxieties: one physical effect of deep-touch pressure is a decrease of the stress hormone cortisol. With a tight hug – or blanket-simulated hug – everyday tasks could be a little less stressful.

Like the humble cow, maybe all we need is a little squeezing.

This content was created in paid partnership with Groundd. Learn more about the benefits of weighted blankets here.