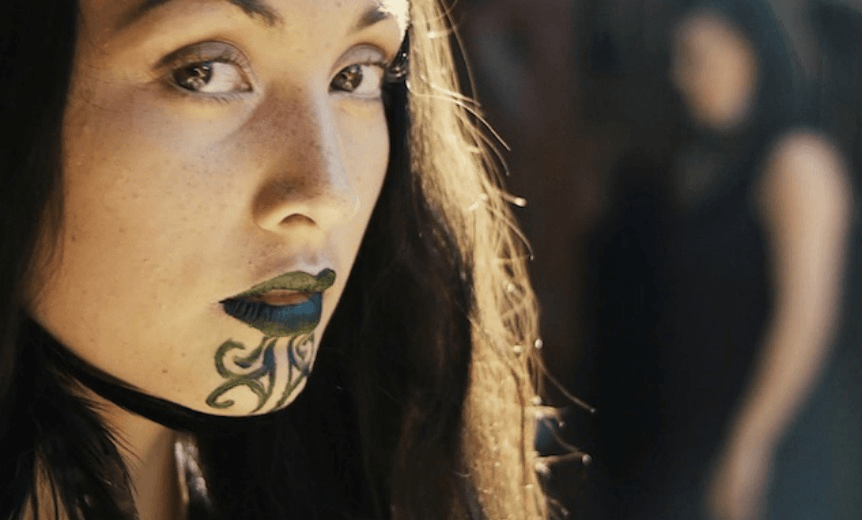 By Rhianna Osborne
Guest writer
Made possible by

This is Piki is Māori television’s new youth-oriented soap, the first of its kind. The Spinoff intern Rhianna Osborne sat down with the director Kiel McNaughton to find out how the bilingual show came together – and how Snapchat might be the future of storytelling.

This is Piki is the latest local show to hit Māori Television, a uniquely New Zealand drama that weaves social media, te reo and teen soap elements to create a series unlike any this country has ever seen. The brainchild of Cliff Curtis, This is Piki stars Hinerauwhiri Paki as the talented, strong-minded Piki as she deals with the day to day struggles of being a teenage girl in Rotorua.

Featuring an array of undiscovered local talent, and teenage-oriented storylines that will resonate with an audience drifting further and further away from broadcast television, The Spinoff’s Duncan Greive described This is Piki as “a distinctly modern drama which could have come from nowhere else”.

Director Kiel McNaughton is a man of many talents in the industry; he’s a playwright, runs his own production company, has worked on Power Rangers, Vincent Ward’s River Queen but, as with nearly all New Zealand actors, will likely always be best known for his role on Shortland Street, as James ‘Scotty’ Scott. We sat down together to discuss making local TV history with This is Piki the morning after its premiere.

Could you briefly describe where the idea behind the show came from?

Māori Television put out a quest for proposals to create a half hour drama series with a budget of $500,000, which is nothing. We had a different idea that we wanted to put in, then Cliff Curtis approached us to back his project.

This is Piki, or it was originally called Tū Tūru, was green lit from Māori TV. The original idea is probably different to what’s on the screen now, we went through a development stage where it was a little bit more risqué and adult. But the idea was still there, it was about this young girl who wanted to find herself; wanted to find a means of expressing herself authentically.

Māori TV wanted us to aim a little bit more PGR, rather than an adult audience, so we pulled it back in. We managed to get Briar Grace Smith and Victor Rodger on, they really helped us craft the series into what it is – youth-focussed.

Is there anything in particular that you were trying to achieve or portray in This is Piki that hadn’t been done elsewhere?

I guess the main thing was that we wanted to make a show that was from a Māori perspective; theres a lot of talk about diversity at the moment on our screens. For us, we only want to create stuff that celebrates diversity.

In terms of casting, there’s a lot of first time actors. Was this a conscious decision? Or did it just turn out that way?

We wanted to try and cast authentically so we held auditions in Rotorua. We saw Hinerauwhiri in her video so we were really interested in seeing her from the very beginning. We really wanted that authenticity from people like Rickylee Russell (Chardonnay in Boy). They also needed to be watchable and interesting in the more soapy realm.

We weren’t kidding ourselves by thinking we were making some sort of high-end drama, which was what we started at the very beginning to make, but I guess we really wanted experiment with a soapy drama that is for a younger audience.

What about the involvement of Snapchat in each episode, will that be throughout the series?

Some of the transitions between scenes are Snapchat style, and every episode ends with a Snapchat post. When Briar Grace Smith came on, she really liked the idea of building social media stuff in. I think she was the one who came up with the idea of ending everything with Snapchat, which can, with a certain degree, sum up what’s happened in the episode. Hopefully it works.

I thought it was interesting how the show manages to incorporate both English and Māori into the dialogue, what motivated the bilingual aspect?

We worked with Stacey and Scotty Morrison to infuse the script with enough Māori that people are able to pick up. The stuff that they put in is deliberately repetitive so that a viewer, over the course of the series, will be able to pick up certain idioms, phrases and words.

How did you find the funding process for This is Piki?

The money was set aside for this project from Te Māngai Pāho so there was $500,000 for eight half hours. In terms of getting the funding, that wasn’t the struggle – making the show on that budget was always gonna be a struggle.

What we were trying to achieve was the first soap drama from a Māori perspective. We didn’t make any money, we have to do other jobs in order to pay for the time that we spend on this because the show doesn’t pay our bills.

It’s a tough situation where you’re trying to change the face of television, the money just isn’t there to do it.

How do you find the funding environment ?

From what I know, there are a lot of facets to mainstream television and how it gets the funding. Māori TV are never gonna have the audience numbers that TVNZ has, but if the numbers go up then the money comes.

To answer the question of whether there’s any bias: I know New Zealand On Air want to fund diverse projects, it’s about getting those projects in. The struggle that we have at the moment is that we see lots of avenues where money can be invested into shows that are a lot riskier and wouldn’t go onto mainstream television. The issue is getting it off the ground and convincing people that there is an audience for it.

We haven’t personally pitched Māori content from a Māori perspective, but we have recently pitched something after making This is Piki to one of the networks and we have got a little bit of traction on that, which is promising. Maybe it’s just that people just haven’t been pitching this kind of stuff… We look at what is being commissioned and say ‘oh it’s just another one of those shows’, but maybe they’re just not getting the right shows pitched to them.

Could this kind of show work on another channel? Yeah, I totally think it could. I don’t know whether or not this show is gonna reach its demographic, though, because I don’t know that people are even watching TV anymore.

One article said the show is reminiscent of Being Eve, which was a mainstream show. It’s matured a little bit, but I think in an ideal world there would be at least 13 episodes of it so that all of the characters can go on a bigger journey.

Would you like to see Māori Television produce more shows like this in the future? Or will it depend on how this one rates?

I hope it doesn’t depend on ratings, I would love to see more shows like this, more dramas. I hope they don’t worry about the traditional ratings because they’re not a very good indicator. I know that Find Me a Māori Bride got really good On Demand numbers, so maybe the success of that was combining On Demand numbers as well as the TV ratings, which is a great sign.

I hope this other thing that we’ve got with one of the other networks gets picked up. It could be more diverse, more interesting and might push the boundaries. But here’s only a certain amount of money in the pot.

Are there more episodesof Piki on the horizon? Or was it always just going to be those eight?

It was only commissioned for eight, but you never really know. I think it’s a great world that we’ve set up that could work well as a 22 episode kind of thing – or at least 13 episodes so you can really get into it. We made it on a tiny budget, but it looks great. People have done a great job, and hopefully it helps other people get future work off the back of it.

This is Piki is now playing on Maori TV every Thursday at 8pm and is also available On Demand.