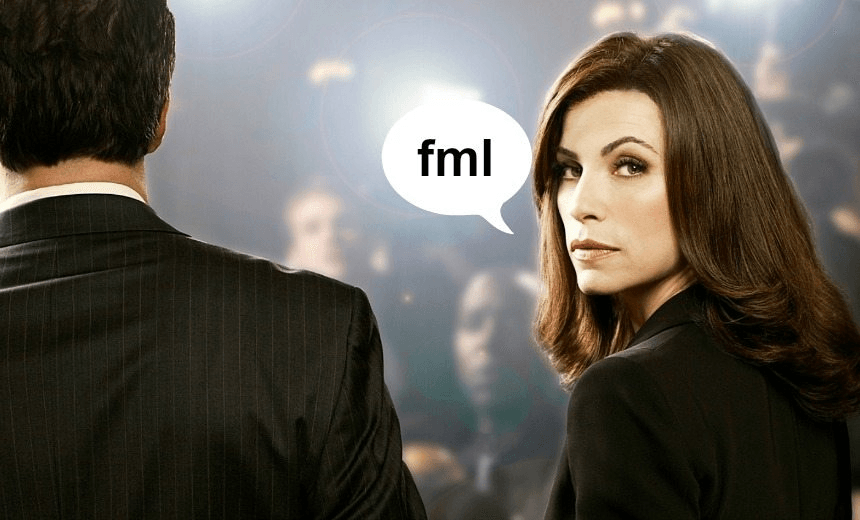 We’re with them: A salute to the ambitious women of the small screen

Pete Douglas seeks to find some light in the dark as we near the end of a horrific year, lining up some incredible TV women who have risen above The Worst Men Ever.

2016 has been a rough year, especially so for women. Between the subhuman treatment of a young woman by the Chiefs rugby team, to mass hysteria about remaking a 30-year old action/comedy movie with female leads, to that interminable bore Bono being named one of Glamour’s women of the year, you really couldn’t make this shit up.

As darkness fell last week, and the reign of blathering orange horror began in earnest, some political pundits just couldn’t help but put the boot once more into womanhood in 2016. Apparently, Hillary Clinton was a weak candidate all along, and there had been a bevy of better (predominantly white and male, surprise surprise) options available.

The subtext entirely this: a dude would have won. While it would be far too glib and simplistic to attribute the fresh hell which we now inhabit to a question of gender alone, it’s hard not to feel like it played a huge part.

And so I have decided to turn to my old friend – television – for some solace, and present some of the great female characters of the small screen who have been consistently let down by this cruel world, but have continued to survive and thrive like a seedling growing from a pile of horse manure.

Leslie Knope in Parks and Recreation

During season four of Parks and Recreation, Leslie progresses her political ambitions by running for Pawnee city council. It’s a role she is eminently qualified for, given her background in the local community and civil service.  However, she comes up against Bobby Newport (expertly played by Paul Rudd). He’s an entitled, imbecilic, childlike, buffoon with no political chops, who decides to run for council on a whim.

Mindy Lahiri in The Mindy Project

Inspired by creator Mindy Kaling’s own mother, who was a successful obstetrician/gynecologist, Mindy’s struggle is more subtle. Whether it is battling for career advancement or having a say in the run of the practice where she works with her male cohorts, Mindy uses her persuasive smarts to make her voice heard.

Ultimately, the age-old question of balancing a career and a family can be ignored no more. Unlike the Sandra Bullock rom-coms which our hero loves so much, The Mindy Project tackles these modern dilemmas in a much more realistic way.

Alicia Florrick in The Good Wife

Meet a successful lawyer, forced to put her blossoming career on hold to support her philandering husband Peter. After her husband is caught is implicated in an embarrassing sex scandal, which ultimately has legal ramifications, Alicia is left with nothing.

Despite a 15 year absence from the workplace, Alicia starts again at the bottom of the career ladder, and kicks butt working her way back up to the top again.

Local hero Cheryl West kicks off Outrageous Fortune when her husband, and patriarch of the criminal West family, Wolfgang West is put in prison for four years. Over six seasons, Cheryl tries to keep the family on a straight and narrow path.

The ultimate Kiwi battler, Cheryl starts an underwear company to make ends meet, and manages to keep the rest of the West clan out of jail for the most part, despite Wolf’s best efforts to get them back into the criminal game.

Liz is the creator and head writer of The Girlie Show – a fictional NBC sketch show that forms the setting for 30 Rock. When the world’s most charming misogynist Jack Donaghy hits the scene, he quickly changes the show to T.G.S. with Tracy Jordan, noting the need to attract more young male viewers to the timeslot. To use a New Zealand TV phrase, he “duked” it.

When Liz protests Jack says “I like you – you have the boldness of a much younger woman”. Blergh.

Being Hank Moody’s long-term romantic partner is a tough gig, but especially so when you are also the mother of his child. Novelist Hank (David Duchovny) womanizes, drinks, does drugs, gets arrested and goes to jail for having sex with a minor.

Through it all is Karen (Natascha McElhone), working tirelessly protect their daughter Becca from his destructive behaviour. Now that, is the mother of all tasks.

As the long-suffering wife of Walter White in the Shakespearean tragedy of Breaking Bad, Skyler White is mostly kept in the dark about Walter’s terminal illness and criminal activities. Eventually, she becomes so entangled in the web of deceit herself that she doesn’t know how to extract herself and her family without acting out of pure desperation. This is Cheryl West dialled up to 11.

Watch all of these wonderful women and more on Lightbox today: