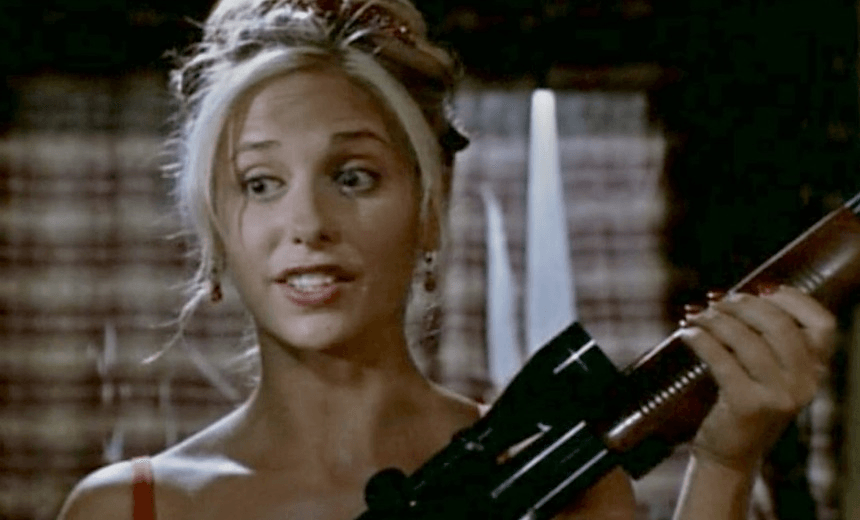 Slay Queen: Why Buffy Summers is the feminist hero I never knew I needed

Sophie Smith discovers a feminist firestarter in Buffy Summers of Buffy the Vampire Slayer, and shares how her own life has since been influenced by the cult ’90s icon.

Despite being a feminist killjoy and enthusiast of most things Joss Whedon, it was only this year that I finally sought out the cult classic Buffy the Vampire Slayer. I was a bit young for Buffy’s initial hey-day – I was 11 when it aired for the last time – and my dad was notoriously strict about what TV content my brother and I could watch (he only valued film).

BtVS last aired on May 20th of 2003, so although I may have arrived a little late to the Buffy Summers party, I have still been able to learn a shit-ton from her. I’m only three seasons in so far, but I am already utterly convinced that it is a show that young people should still be watching. Here are five lessons I have learned from Buffy the Vampire Slayer:

You’d think in this day and age this message would be more mainstream, but actually it is not. In a world of TV and movies where even “strong female characters” are routinely physically overpowered by men (I’m looking at you, Game of Thrones – Brienne is great but she’s few and far between), there’s something so damn satisfying about seeing this tiny girl waste every demon the hell-mouth can throw at her – not to mention the occasional dude-bro at her high school.

I’m bloody sick of the media telling women that even if you are strong in the way you behave, you only have strength until a man decides to physically dominate you. Showing women kicking ass on TV makes women feel, dare I say it, empowered. And that empowerment extends to real life.

It extended to my real life, at least.

A few weeks ago I was out with some friends, and while I was walking back from the bathroom in a club, some guy pushed me against a wall. He then started to grope me and didn’t back off when I clearly stated that I was not into this frightening form of pick up artistry.

Luckily I was fresh from about three episodes of BtVS from that afternoon, and it gave me the motivation to hark back to my women’s self defence course. I gave him a swift palm strike to the nose. Needless to say, I got the message across. I’m not advocating violence, but a gal has got to defend herself – Buffy Summers shows that women can and should fight back.

2) You don’t have to be perfect. Just try your bloody best.

Women are still faced with a lot of pressure to ‘have it all’, and be perfect at it. But how realistic is that?  Buffy is a girl with a lot of responsibility; she has to deal with trying to pass normal high school, maintaining some semblance of a social life, and routinely thwarting a demon-lead apocalypse. I mean, I think we all know what that’s like, amirite ladies?

Buffy deals with all kinds of crazy competing factors in her life, and makes heaps of mistakes. Despite the life and death stakes (no pun intended) of the show, Buffy is allowed to make mistakes and the world doesn’t end (not too much, anyway). She juggles so many things, and sometimes she lets them fall. But she just picks them back up and does the best she can.

I’m currently in Italy, and I recently tried to take on the responsibility of eating two whole pizzas by myself in one sitting (one four-cheese, one spicy salami). I felt like a total failure when I only managed one and a half, but then I remembered BtVS. I consoled myself in the knowledge that we’re none of us perfect, and I had tried my best.

3) Get some good friends around ya

Everything is a lot easier if you’ve got some excellent friends to rely on. At the beginning of the show, Buffy rejects her destiny as the slayer, because she has already had to sacrifice friendships in order to protect people around her.

At her new high school, her mates Willow, Xander, and a bunch of others, accept Buffy and her role as the slayer (not to mention they help every episode of the show to pass the Bechdel test). She embraces her destiny, fights the forces of evil, and all with a little help from her friends.

Buffy’s friends are a support network and backup team, and the show really makes it clear that she couldn’t have done it without them. Everyone should surround themselves with a “framily” (friendship family) to help them get through the tough times.

4) Masculinity and femininity are weird AF

At face value, Buffy is this super feminine, petite, blonde high-school girl. Even though this kind of character is traditionally the first to die in the horror genre, Buffy packs an equally masculine punch to deal with any trouble that comes her way.

Physically strong women on TV are so often made to dull their femininity, to be stoic and unrefined (even Xena’s table manners left a lot to be desired). In this era of femmephobia, outwardly feminine traits are frequently condemned on screen. Buffy is unapologetically masculine and feminine; she isn’t made to repress either aspect of her identity.

As a young’un I used to be quite adverse to most things ostensibly feminine. I wasn’t a tomboy (I was never good enough at sports), but I was pretty uncomfortable with anything girly. It was only when I went to my all-girls high school (AGGS what) that I saw a lot of different ways of expressing femininity. Perhaps if I’d been introduced to Buffy a little sooner, I’d have been a lot less awkward about it.

The other characters in Buffy also bend gender norms – Willow is Sunnydale’s resident hacker, and Xander and Giles are often the damsels in distress. But none of these characters are penalised for going against the gender grain, they are allowed to be who they are. More of that please.

5) Look no further than Buffy Summers for style

If there’s one last thing you can say about BtVS, it’s that the style is about as ’90s as you can get. At the moment I’m frequently sporting the hairstyle shown above (what’s better than a useless half-ponytail at the top of your head), and I’m a big fan of a loose-jean/sneaker combo. I have also recently bought overalls and a tiny leather backpack to really complete my transformation.

Let’s all just tie our sweaters around our waists and be done with it. And remember…