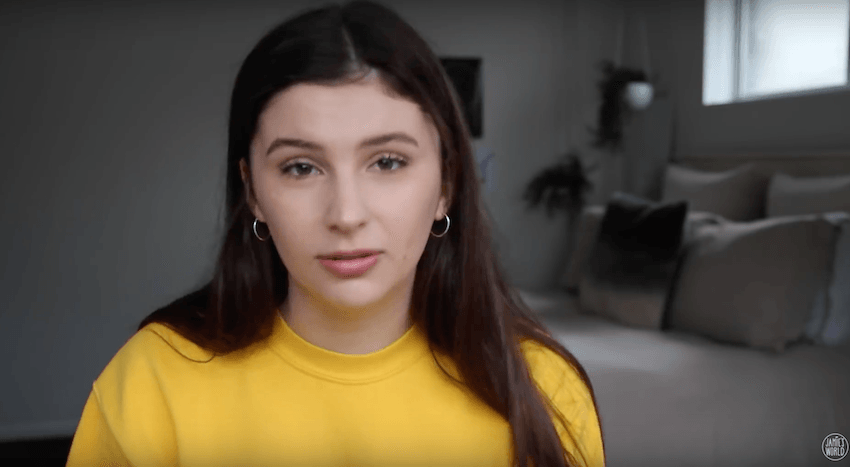 How Jamie Curry’s coming out video claimed back her authenticity

Jamie Curry uploaded a video titled “my sexuality” last Sunday, and in doing so let viewers in on a deeply personal side of herself.

Sharing one’s personal life online isn’t a new phenomenon, but for YouTube content creators it’s also a part of their job. Audiences expect to be let in to the creator’s world, often at the expense of the influencer’s privacy and personal life. On the other hand, sharing a personal story can be important in forging a connection with the viewer on the end of a computer screen.

New Zealand internet personality Jamie Curry knows all too well the hazy lines between her private and personal life. The 21 year old has shared her antics on social media for almost a decade, amassing 1.5 million subscribers on YouTube and a staggering 9.1 million Facebook page likes. In the past year, she took a step back from her social media presence, and on Sunday she let her audience know why.

“I just wasn’t happy, I didn’t make videos because I was sad,” she said. The video has been viewed over half a million times since it was uploaded.

Her lack of inspiration for creating online content stemmed from her confusion about her life direction and her sexuality, the latter of which she explained in depth in the video, before announcing her engagement to an unnamed woman. On Thursday, she posted a photo on her Instagram, presumably of the pair together – although still has not identified her by name.

The move adds Curry to a long list of online video personalities who have used YouTube to come out of the closet to their followers, including the likes of vlogger turned musician Troye Sivan and Olympic diver Tom Daley.

Curry doesn’t necessarily fit the model of the standard female YouTube star, often a glamorous beauty or lifestyle vlogger. Instead, Curry gained a platform by celebrating her point of difference: her awkwardness and relatability to the average New Zealand teenage girl.  She built her online persona around being the girl next door, a far cry from the lavish lifestyles of some top influencers who are paid by brands to travel and party.

Her following affirmed Curry as one of New Zealand’s most popular social media influencers; there are now at least 10 million eyes on what she managed to keep private for a long time. Her huge success begs the question whether getting personal is necessary for content creators to get views. Those who have done the same as Jamie have accumulated tens of millions of views, and gained significant amounts of subscribers. YouTube’s business model, which shares its profits with its creators, means coming out videos are profitable too.

The financial return doesn’t take away from the bravery of Curry’s decision to upload her video, rather it highlights the algorithmic necessity for social media stars to share such personal elements of their lives. Viewers demand insight into the lives of their favourite creators, just as audiences of reality TV shows want to see everything that goes on in a contestant’s life. In a sense, personal life equals profit.

For one former New Zealand YouTuber, the experience of coming out online didn’t quite mirror that of Jamie’s. Benny Naden created his YouTube channel when he was in year nine; his lifestyle videos quickly gained an enthusiastic following. His decision to come out on the platform was faster than most – he discussed his coming out with his parents on a Friday, and posted the video that Sunday morning.

Horrific bullying from some of his peers prompted Naden to leave school six months after the video was uploaded. He subsequently deleted his channel and stepped back from social media altogether, despite at one point wanting to pursue a career as a full time influencer. However despite his own experience, he welcomes YouTube stars becoming more real.

“The main reasons why I left [social media] is because it can be a very fake industry in the sense of how people perceive people and how you portray yourself,” he said.

Jamie’s video he said, is a great example of how creators can let an audience in on a more genuine side of themselves.

“I think when people are authentic and real [online], people are like ‘holy shit.’”